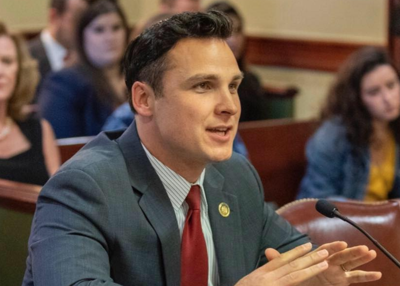 A state House lawmaker reveals on Wednesday he tested positive for COVID-19 earlier this month and has since recovered.

Story provided by The Center Square

Rep. Andrew Lewis, R-Dauphin, said he received the results on May 20 that indicated his flu-like symptoms were actually that of the novel coronavirus. He self-isolated and notified every staff member he had contact with of the exposure. His last day at the Capitol building was May 14, according to the news release.

“Out of respect for my family, and those who I may have exposed, I chose to keep my positive case private,” Lewis said. “Now that I have fully recovered and completed the quarantine as required by the Department of Health, I feel now is the appropriate time to share this information with the public and my constituents and I look forward to being a resource in sharing my experiences with COVID-19 and helping our community navigate this crisis together.”

More than 69,000 Pennsylvania residents have tested positive for COVID-19 since March 6 and over half have recovered, according to the department. Nearly 5,300 have died as of Wednesday.

“I feel very fortunate to report I suffered only mild symptoms, a fever that lasted roughly 24 hours, and a brief cough,” Lewis said. “I feel completely fine and I look forward to fully resuming my duties to the people of the 105th district.”

Rep. Russ Diamond, R-Lebanon, confirmed on his Facebook page that he’d also been isolating at home because of exposure to an unidentified asymptomatic carrier of COVID-19 on May 14. Diamond learned of the exposure after appearing at a House Veterans Affairs and Emergency Preparedness Committee last week in support of his resolution to end Gov. Tom Wolf’s disaster declaration – a strategic move to flout the administration’s phased economic reopening plan.

In his social media statement, Diamond criticized contact tracing as an intrusive and ineffective technique for responding to coronavirus exposure. He’s not received a test nor has he experienced any symptoms, he said.

“I am not sick. Neither is my fiancé. I have missed work for the first time since I was initially elected in 2014,” he said. “That really irks me, because participating electronically does not get things done as effectively as attending in person. I’m angry that even though my self-quarantine was not required, but only recommended under CDC guidelines, that there are plenty of people in Pennsylvania who would wag their fingers at me and try to shame me for simply going about my life peacefully.”

House Democrats, too, expressed frustration and disbelief because they say their Republican colleagues never informed them of Lewis’s positive test or the potential for exposure to the virus. Over the last two weeks, lawmakers have convened for six voting session days and conducted more than 15 committee meetings.

“While we are pleased to learn that this House member seems to have recovered, it is simply unacceptable that some House Republicans knew about this for more than a week and sat on that knowledge,” said House Minority Leader Frank Dermody, D-Allegheny. “Knowing how House members and staff work closely together at the Capitol, we should have been made aware of this much sooner. We should not have learned of it from a media report.”

The news comes as both chambers act on a slew of appropriations bills meant to support a $25.8 billion stop-gap budget that will carry the state through the first five months of the upcoming fiscal year, set to begin July 1. The two-party spending plans strategy came to fruition after fiscal experts advised lawmakers and Wolf’s administration that the uncertainty of the pandemic makes estimating revenues impossible.

April 23, 2020
Thanks for subscribing! Please check your email for further instructions.