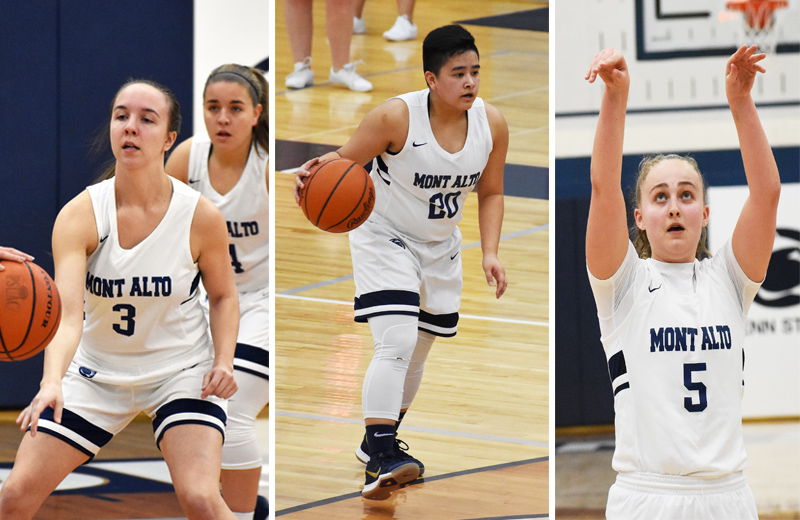 UNIONTOWN, Pa. – For the third time in her career Rebekah Adams (York, Pa. / Central York) was honored on the USCAA All-Academic Team as it was the second year in a row Karley Coleman (Hanover, Pa. / Delone Catholic) was recognized on the team and first time Julianne Noveras (Gaithersburg, Md. / Gaithersburg) received the honors.

Mont Alto finished their season with a 10-14 overall record and were 5-10 in the PSUAC.

All student-athletes must have 24 or more credits on their USCAA transcripts and their cumulative grade point average must be a 3.50 or greater to be eligible for the recognition.

A full list of the 2018-19 USCAA Basketball National All-Academic Award winners can be found here.

Adams, a senior forward, is expected to graduate in the spring with a bachelor’s degree in nursing. The Central York product finished her career with 162 points scored at Mont Alto, while grabbing 177 rebounds.

Coleman was recognized for the second-straight year and on the basketball court she shook off the injury bug to start 20 games this season.

She averaged 7.9 points per game and her 29.1 percent conversion rate from 3-point range was second best on the team.

Coleman also holds the program record for most career assists as she dished out 388 helpers over the course of her four-year career.

She started 28 games for the Nittany Lions including 22 during her junior season where she averaged a career-best 4.5 points per game.

Noveras, a Sophomore guard, has been a backcourt mate with Coleman for the past two seasons and averaged 7.1 points per game during the 2018-19 season.

She shot a team-high 35.7 percent from downtown and really came on in the second half of the season scoring in double digits in seven of the final 14 games of the year.

The USCAA All-Academic Team was announced at the UCAA Championship banquet on Saturday, March 2, which was held at the Seven Springs Resort as part of the championship weekend.

The USCAA National Championship tournament took place on the campus of Penn State Fayette from March 2-6 as the No. 2 seeded Central Maine Community College was crowned champions.

SU Wrestling Wins Four Bouts But Falls at No. 17 Kutztown

SU Baseball Battles No. 5 Catawba but Drops Doubleheader to Indians