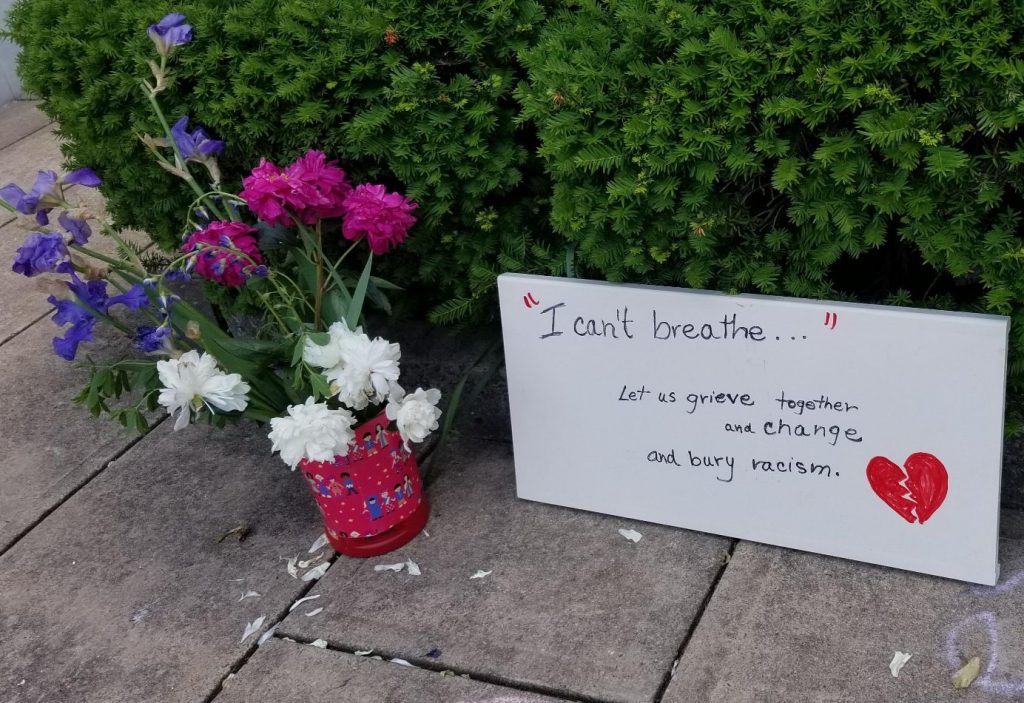 Local civil rights demonstrations across Franklin County this week were peaceful, without confrontation between police and protesters.

About 25 people showed up that day carrying signs declaring “Black Lives Matter” and “White silence enables violence” among other slogans. From there, the protests grew each day, according to organizer Kayla Blue, a Chambersburg resident.

Chambersburg Police Chief Ron Comacho and his next-in-command, Lt. Rick Morrissette, were on hand Monday, talking to the crowd and at one point joining hands with protesters in prayer.

They brought a cooler with ice and water to offer anyone who needed it, mainly because they knew the danger of dehydration at events like that.

’We were here for them’

When they weren’t reminding the crowd to stay behind cones placed strategically on the roadway, they mingled with the demonstrators, talking and letting protesters know they supported their right to peacefully assemble.

“Their message was right on point,” Morrissette said.

The crowd grew the third day, with some of the same people coming back, joined by new faces. But basically they had the same message.

“Our justice system is flawed in many ways,” said demonstrator Sierra Collette ofChambersburg. “It needs to be fixed and we demand change.”

Alex Strom was there on Tuesday basically to be on the right side of history.

“I’m here to stand with my friends,” she said, indicating the crowd around her. “I’m here to fight for what’s right.”

A call for justice, change

Protestors turned out to add their voices to thousands of others across the country, they said. They called for not only justice in the George Floyd case, but a change in the way such cases are handled.

“We will be here every day until our message is heard,” said Blue’s mother, Sandy Parks, co-organizer of the Chambersburg protest.

Blue praised the reaction of local police to the crowd and their message. That message is that everyone needs to come together to achieve change, regardless of their race, politics or religious beliefs.

She and others will show up every day for at least the rest of the week, she said, as they continue to try to get their message across.

Blue praised local police for their reaction to the protest.

“A lot of people think all police are against us,” she said. “These officers aren’t. They have told us so.”

A similar protest drew a crowd of about 60 on the square in Waynesboro Tuesday. They also held signs protesting police actions in Minnesota that led to George Floyd’s death. Their protest was also peaceful.

”Everyone has been polite and peaceful,” said WPD Chief James Sourbier. “Their actions have not given us any cause for concern.”

Both Sourbier and Comacho stressed the importance of peaceful rallies such as those in Chambersburg and Waynesboro.

“They are exercising their constitutional rights (to free speech and assembly),” Sourbier said. “This is a protected activity every person in the county has a right to exactly what they are doing.”

Sourbier and Morrissette believe working in small towns give their departments an advantage over their big-city counterparts. Interaction between his officers and the crowd goes a long way toward keeping the peace, Morrissette said.

“We are very well known to our community,” Sourbier said. “We know each other, so we talk with each other instead of talking to each other.”

Even those who can’t find common ground can agree to disagree because they are willing to talk and listen, he said.

The Constitution guarantees the right of individuals to peaceably assemble to demonstrate and protest, Sourbier said in a post on the department’s CRIMEWATCH® page before the protest started Tuesday.

“Our sworn oath of office requires that we support, obey and defend the Constitution. Peaceable assembly and free speech will not be compromised by members of this department, nor will we vouchsafe the behavior of those who may use peaceful assembly as a veil to incite violence or damage to property.”

“We aren’t immune to crime,” Sourbier said. “We have shootings and all kinds of crime. By the same token, we will help you if you have a problem. We will help you find your lost pup. Our citizens know us, and we know them.”