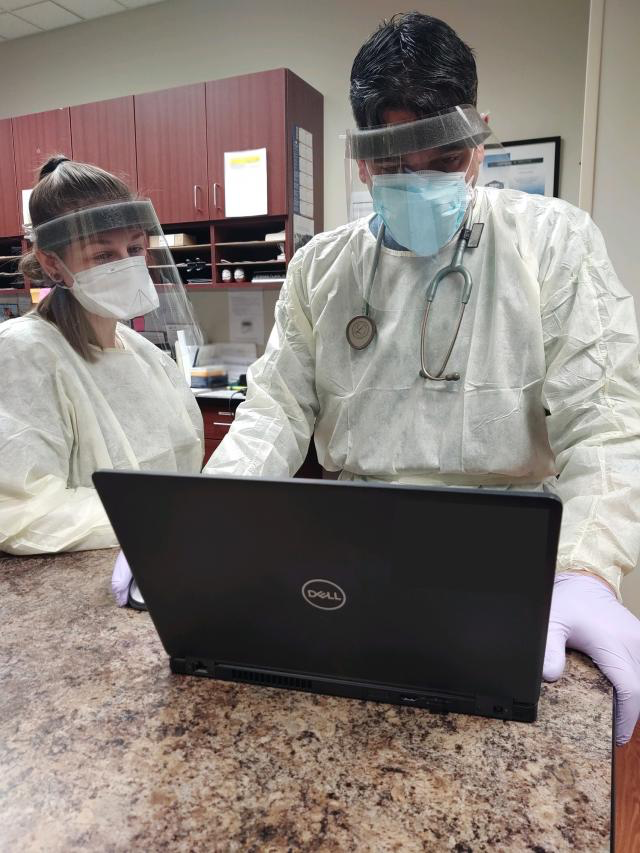 A key instinct for any physician is to bring a patient back to good health.

As WellSpan continued through its COVID-19 journey, some of the primary care providers strongly felt the urge to step up.

“Internally, I had that gut feeling or maybe it was a divine force telling me that this is where I need to be right now,” said Dr. Joe McDermott of WellSpan Family Medicine in Mercersburg.

Dr. Stephen Flack, medical director of primary care in Franklin County, worries about community health and the health of his patients. He is also concerned about his hospitalist colleagues, and he wanted to be available to support them, if necessary.

On March 28, WellSpan Health sent out a call to its providers, asking them for their priority level of interest for redeployment; ranging from immediate to future.

A total of 36 Franklin County outpatient providers were prepared to redeploy to the hospital to work as hospitalists, according to Niki Hinckle, WellSpan’s senior vice president of physician service. In addition, CRNAs and anesthesiologists were trained to support increased numbers of critical care patients.

Answering the call for redeployment

Across the WellSpan system, more than 150 physicians and advance practice providers have also answered the call for redeployment.

An early redeployment allowed Flack and McDermott an opportunity to orient and effectively train and join the efforts of their colleagues if needed.

“I felt that I have a fantastic support base within my own practice at Mercersburg,” McDermont said. “I was able to make this decision freely without any concern.”

Thus far, Flack and McDermott’s hospital activity has included a practice admission and discharge with a hospitalist alongside, as well as writing some progress notes.

McDermott said that he and Flack are on “stand-by” and prepared if needed.

“We are all in this together as a team,“ Flack said. “Any skills I might have to serve the community should and will be offered.”

Since 2011, Flack’s level of gratitude toward providers and staff at WellSpan Chambersburg Hospital has been unwavering. At age 40, he suffered a stroke. Thanks to an immediate response by the hospital’s team, he was set on a path to regaining a normal, healthy life.

Caring for patients at the point of attack and when they are sometimes at their most vulnerable is the most rewarding feeling in the world, McDermott said.

“No matter which way things go, as of late, hopefully for the better, being able to be diverse and help in any capacity means a lot to me,” he said. “That is the definition of being a team player, and I feel that is important in situations such as this.”

Cancellations Due to the Coronavirus Scare

March 23, 2020
Thanks for subscribing! Please check your email for further instructions.