Take a look back at Franklin County’s history through news and photos that appeared in local newspapers 25, 50, and 100 years ago on September 20th.

“Home residents may find peace in the garden”

CHAMBERSBURG – Franklin County nursing home residents and the public could find peace at a therapeutic garden next to the nursing home next year.

Commissioners supported the idea, but no plans have been made.

Kessler said the garden could tie into the nursing home’s horticulture program, where residents learn how to take care of plants and flowers.

His next step is designing the garden, which would probably to the northwest of the nursing home, between that and the Human Services building. The area is fairly flat.

Possibility of formation of panel to discuss “Waste Disposal” was considered at a recent meeting of the Chambersburg Area Young Adult Farmers in the vocational agriculture classroom of Chambersburg Area Senior High School.

The discussion would take place as part of the program of the State Young Adult Farmers convention at Pennsylvania State University in November.

Maroons Look To Add Another Feather To Their Cap

The game today in Hagerstown promises to be a fast one.  They are coming over with their best team and if the local boys can win they will add another feather to their cap.  Philip who is anxious to pitch another game for Chambersburg, telegraphed yesterday that he was confined to his bed by tonsillitis.  Kid Matthews is very anxious to pitch the game and will be given the chance.  “Steiny” has confidence in the kid and says he can win. 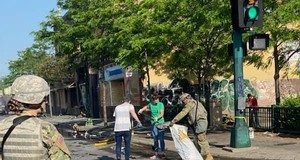 Christen Smith - June 1, 2020 0
“People have every right to speak out and demonstrate, but it’s unacceptable to take advantage of protests to incite violence, harm others and destroy property,” Wolf said.

Looking Back at Franklin County’s History: It Happened on October 2nd

Looking Back: It Happened on August 14th