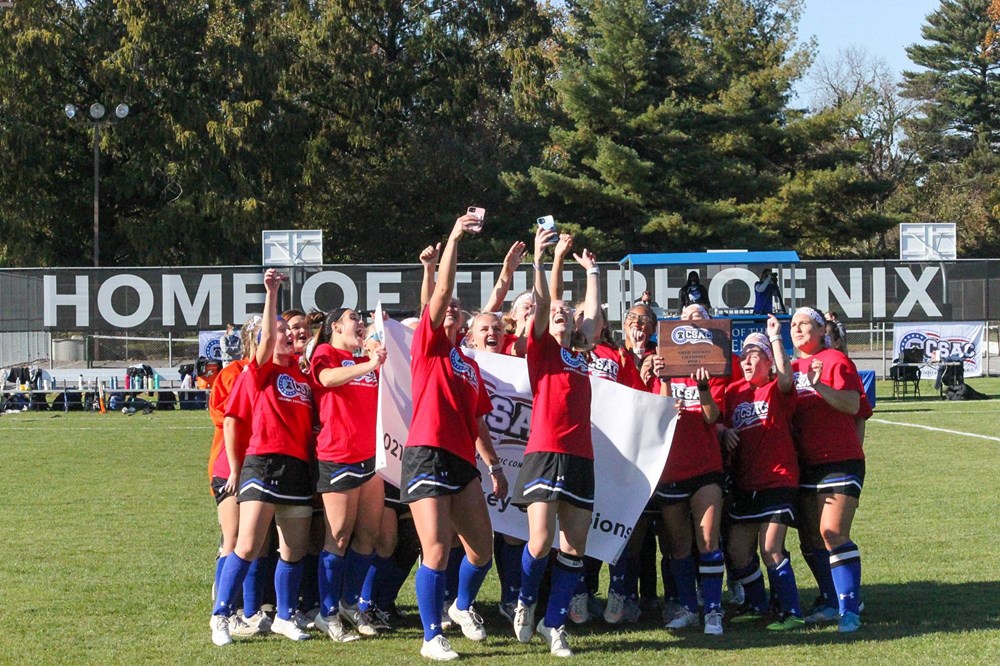 A magical run by the Wilson College field hockey team continued Saturday with a dominant performance in the Colonial States Athletic Conference (CSAC) field hockey championship game. The Phoenix improve to 18-0 on the season with a 3-0 victory over the Cedar Crest College Falcons (9-9). Junior Alexis Pflumm (Camden, Del., Caesar Rodney) was named the CSAC Championship Most Valuable Player.

The Phoenix offense unloaded a barrage of shots on the Falcons defense. In the first five minutes of the opening quarter, the Phoenix super senior Michaela Singer (Annville, PA., Annville-Cleona)  rebounded her own shot and passed it to sophomore Hayley Koller (Atglen, PA, Octorara) for the first goal of the game.

Before the quarter was over, the Phoenix would take three more shots but couldn’t connect and closed out the quarter with a 1-0 lead.

The second quarter was a defensive battle. Neither team found success scoring the ball; and the Phoenix were unable to take advantage of 3 penalty corners. They took the 1-0 lead into halftime.

The Phoenix got an early penalty corner attempt in the third quarter, but Pflumm’s shot was saved by the Falcons keeper. Midway through the quarter, the Phoenix defense faced its most challenging moments of the match. The Falcons attempted a pair of penalty corners, but great defense by senior Breeann Sheaffer (Middleburg, PA., Midd-West) and Pflumm cleared both attempts without allowing a shot.

As the third quarter was nearing an end, Singer put two great shots on cage but Falcons keeper Brynn Rifino made two outstanding saves to keep the visitors within striking distance heading to the final quarter.

Winning time came in the fourth quarter as the Phoenix could sense victory was near. Singer continued to apply a ton of pressure as she ripped 6 shots over a three minute period, but just couldn’t connect.

In the 53rd minute, Sheaffer inserted a penalty corner to junior Abigail Rosenberry  (Shippensburg, PA., Shippensburg) who found Pflumm in the middle as she rattled the cage to give the Phoenix a 2-0 lead. A few minutes later, super senior Allison Reber (Narvon, PA., Garden Spot) iced the match for the Phoenix as she sent a shot through the keepers legs and into the cage for the final score of 3-0, extending the team’s magical run.

The Phoenix out shot the Falcons 19-2, including a 12-0 advantage in shots on goal. The Phoenix also enjoyed an 11-3 edge in penalty corners. Singer attempted a season high 13 shots. Pflumm tallied her 12th goal of the season while Rosenberry recorded her 10th assist. Reber’s goal was her 5th of the season which matches her career high set in 2018.

The Phoenix have earned the CSAC’s automatic qualifying bid to the NCAA Championships. The NCAA will release the teams and first-round sites on Sunday on NCAA.COM. The team will travel to one of the sites for first-round action on Wednesday, November 10th. Check out www.wilsonphoenix.com for the latest information.