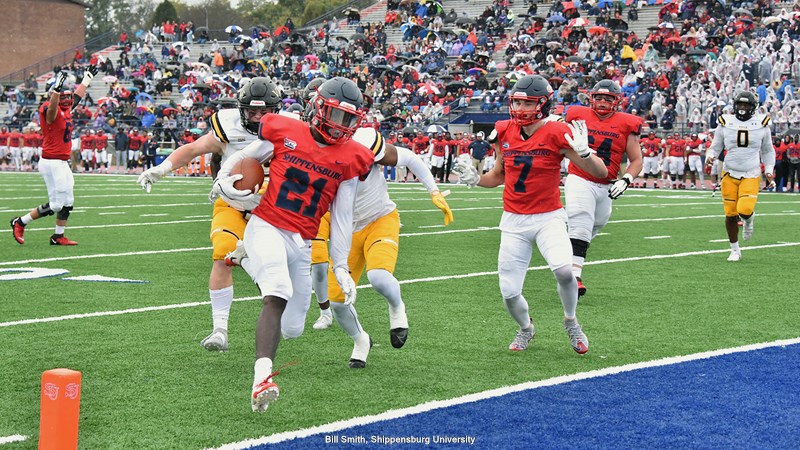 The Raiders dispatched the Marauders 38-7 and controlled the ball for 40:34 and recorded eight sacks in taking the victory. The team scored on four of its five first-half possessions and set a single-game record for rushing defense.

Shippensburg (6-2, 3-2 PSAC East) limited Millersville (2-6, 1-4) to minus-61 rushing yards – the fewest rushing yards by a Raider opponent in school history. Eight SU sacks resulted a loss of 58 yards, and the Marauders ran the ball just eight times and those carries resulted in a total of minus-3 yards.

Through three quarters, SU’s defense limited the Marauders to 13 total yards on 31 plays and only three first downs. Millersville went 3-and-out on six consecutive drives after its opening possession and did not convert a third down until the fourth quarter.

Twelve different Raiders contributed to the team’s 12 TFLs. Redshirt-freshman Riley Good (Landisville, Pa./Hempfield) had a 10-yard sack that resulted in a fumble and sophomore Jacoby Sherard (Lawrenceville, N.J./Lawrenceville) had a nine-yard sack.

About the only hindrance for the Raiders on Saturday was penalties – SU was flagged 10 times for a total of 100 yards.

Shippensburg’s final road game of the season is next weekend – a 1:05 p.m. kickoff at East Stroudsburg.

Notes: In addition to the school record, the minus-61 rushing yards is the third lowest in NCAA Division II this season (Mars Hill held NAIA Virginia Lynchburg to minus-76 yards on Sept. 9, and West Chester held Millersville to minus-64 rushing yards on Sept. 25)…Shippensburg has now won 17 consecutive meetings in the series with Millersville…in the last six meetings between the two teams (2015-29, 2021), Millersville has totaled just 31 rushing yards and been sacked 35 times in that span…Shippensburg now leads the PSAC in time of possession (34:29).