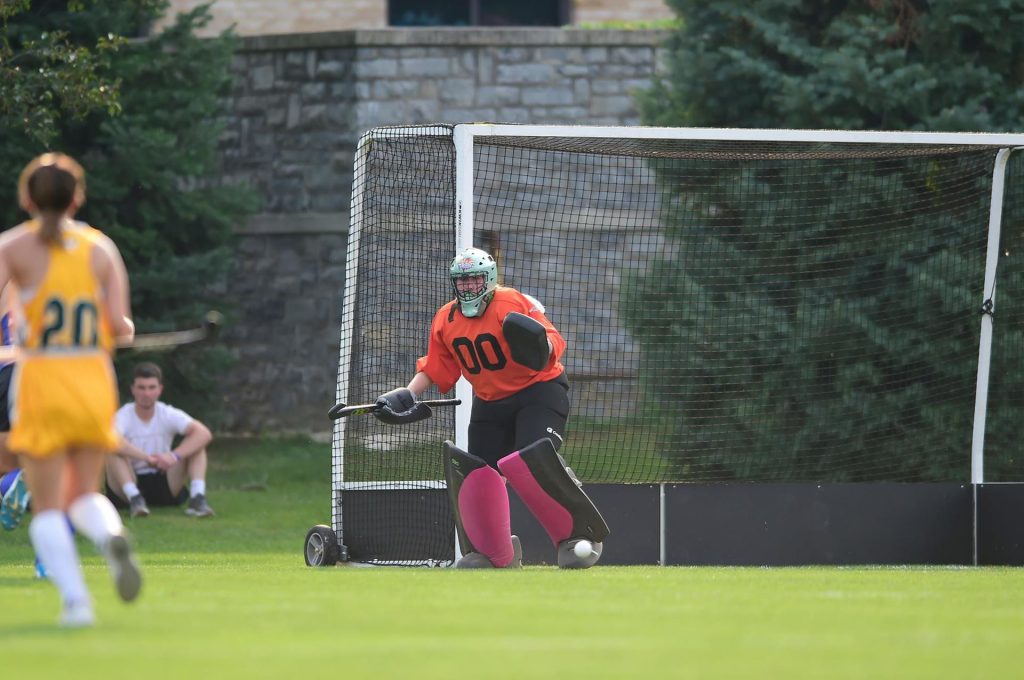 The Maroons fell to Wilson College’s field hockey team Saturday, adding another win to the Phoenix so-far perfect record. The team garnered the 2-1 win in a road game, then on Sunday added another victory against Virginia’s Ferrum College.

The Phoenix (8-0) got an outstanding Saturday performance in goal from super senior Krista Nayadley (Hampton, VA, Hampton) in defeating the Maroons (3-3).

The Phoenix lit up the scoreboard first as senior Breeann Sheaffer (Middleburg, PA., Midd-West) dribbled into the circle and flipped a backhanded shot past the Maroons keeper for a 1-0 lead midway through the opening period.

For the remainder of the first period, the Maroons offense dominated possession as the hosts recorded three penalty corners, six shots with four shots being on goal, but Nayadley recorded four saves to protect the Phoenix lead.

The Maroons offense continued to pressure the Phoenix in the second period, firing nine shots, seven of which were on goal. Nayadley again was up to the challenge and stopped all seven attempts as the Phoenix took a 1-0 lead into halftime.

The defense was solid for the Phoenix in the third period, limiting the Maroons to one shot on goal. Again, Nayadley denied the attempt.

During the final period, the Phoenix defense again stood tall in the face of pressure. Super senior Jenna Carty (Chambersburg, PA., Greencastle-Antrim) recorded her fourth defensive save of the season less than two minutes into the period. A few minutes later, the Maroons finally got on the scoreboard off of a penalty corner to make it a one score game. The Maroons put two more shots on goal in the final ten minutes of the period; and Nayadley tallied two more saves to preserve the 2-1 victory for the Phoenix.

The Maroons out shot the Phoenix 22-6, including a 16-4 edge in shots on goal. Singer’s goal was her tenth of the season and marks the fourth time in her career she has scored at least 10 goals in a season. Nayadley’s 14 saves matches her career mark set in 2019 when she recorded 14 saves against Bryn Mawr.