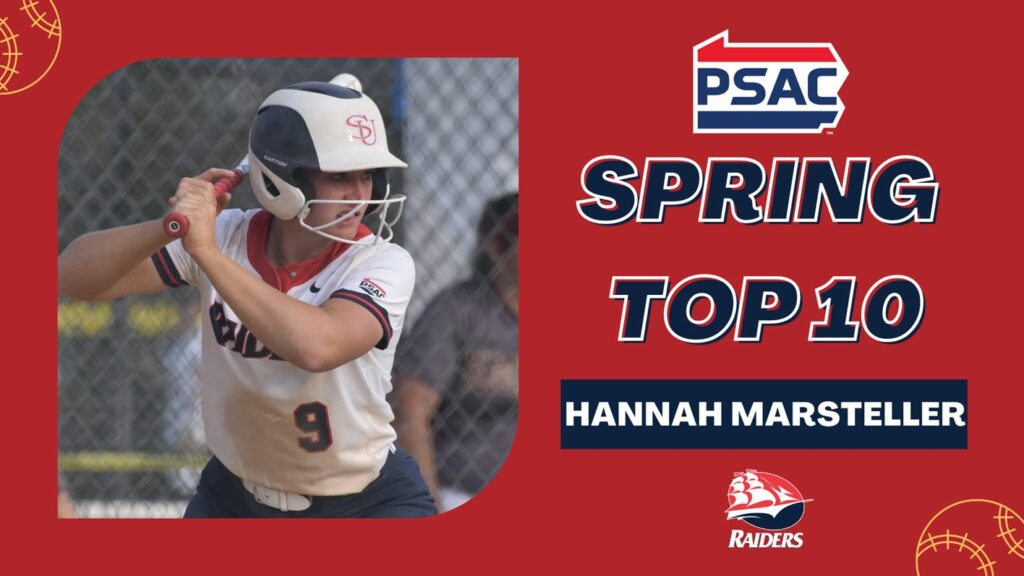 Marsteller is a senior academically and a junior athletically who is majoring in biology (pre-veterinary concentration). She maintains a 3.56 cumulative grade-point average (GPA).

Marsteller was part of the 2020-21 PSAC Top 10 edition that was amended to the PSAC Top 12 rather than the normal PSAC Top 10 awards. She becomes the first-ever SU Softball player to repeat as a PSAC Top 10 award winner and the first overall repeat winner in the same sport since Megan Lundy (outdoor track & field, 2014-15 and 2015-16).

Ron Lenz Player of the Year

The starting first basewoman for the Raiders, Marsteller is the only Raider to be named the Ron Lenz Player of the Year and has won the award in back-to-back seasons. She is the first Raider to be named a NFCA First Team All-American in consecutive seasons and is also the first Raider in 16 years to be named an NFCA First Team All-American twice (Kelley Tiesi, P, First Team, 2004, 2006). Marsteller is the fourth player to win multiple D2CCA Softball Player of the Year honors, and the third to do so in consecutive seasons.

In 52 games, Marsteller hit .521 with 17 home runs, 61 RBIs, 13 doubles, 54 runs, 154 total bases, a .588 on-base percentage (OBP) and a .933 slugging percentage. She leads the nation in batting average and on-base percentage, ranks fourth in slugging percentage, third in hits, sixth in total bases and is tied for eighth in home runs. She began the season on a 27-game hitting streak, which resulted in a PSAC record 37-game hit streak when including the final 10 games of 2021.

Marsteller is just the seventh player in PSAC history to hit .500 or better in a season and the only player in history to ever do it twice. She is also the first PSAC player to win back-to-back PSAC East Athlete of the Year awards in 20 years since Bloomsburg’s Erica Miller won the award four straight seasons from 1998-2001.

To be a candidate for the PSAC Top 10 Awards, a student-athlete must achieve a cumulative grade-point average (GPA) of 3.50 or higher and be a starter or key reserve with legitimate athletic credentials. A total of five men and five women are selected as award winners after each of the three competitive seasons (Fall, Winter, Spring).

It is the second straight week that Marsteller has been honored for academic excellence. Last Tuesday, Marsteller was named to the Division II Academic All-America ® Softball Team, an award selected by the College Sports Information Directors of America (CoSIDA).