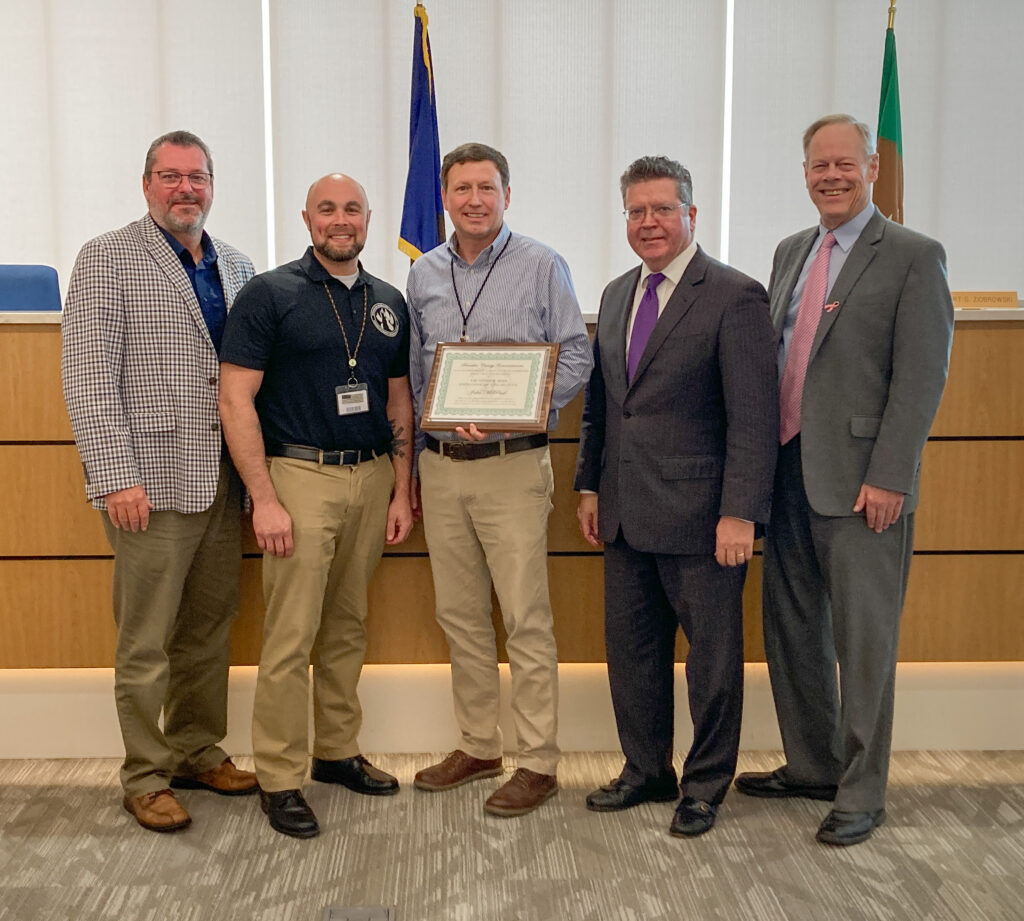 October’s Employee of the Month recipient was determined by the Special Thanks and Recognition (STAR) Committee, which received a record-high 46 nominations for the October award, five of which were for McPaul. When nominating a coworker, employees are asked to cite an event or instance that elevated an individual to Employee of the Month status. Several nominations cited the major role McPaul played in organizing another successful golf tournament fundraiser for the Veterans Affairs department in September.

“John was extremely prompt and courteous in responding to any questions from event volunteers or golfers,” said one nomination form. “He made sure the volunteers were always well supplied. He stopped what he was doing numerous times to meet someone else’s needs.”

“The event was huge with more than 250 golfers in attendance. I know that planning an event like that is far from easy, and I was impressed by how smoothly and organized the event was,” said another colleague. “John was a major part in coordinating this event. He was very calm, cool and collected as he was bombarded with tons of questions from golfers and volunteers…John was a great multitasker, which is critical to the success of such an event. I heard tons of compliments on how nice the tournament was, and it seems to be a tradition for some. That speaks volumes!”

The nomination continued, “There were tables upon tables of prizes that John and the Veterans Affairs staff took care of and handed out at the end of the tournament. That definitely takes some organizational skills. The staff was on the move the entire day and barely had time to sit down. I can’t imagine the preparation leading up to the day of the event and the aftermath as well. Shout out to John for his hard work, and I can see that Veterans Affairs Director Justin Slep can count on him! This fundraising event continues to be a huge success. Thanks for all you do for veterans!”

“Throughout the day’s activities at the golf tournament, John was multitasking and taking care of anything that needed to be done. I heard nothing but positive comments from the golfers on how well run the tournament was,” said another coworker. “Many of them were returning golfers from previous years, which speaks volumes to the success, fun and flow of the tournament. There was also a plethora of door prizes and items to bid on. These were donations from various local businesses that were solicited by the Veterans Affairs staff. That requires an entirely other set of organizational skills to keep all of that straight!”

The nomination form continued, “Earlier in the week, I bumped into John and he mentioned that not only was it the week of the golf tournament but another large monthly event was occurring the day before. He said this with a grin and kept on moving! It goes without saying that John is an invaluable resource not only to Justin Slep but to the entire department. This fundraising event was, again, a huge success and is a reflection of their dedication to the veterans of Franklin County.”

McPaul’s outstanding characteristics are attributes that have not gone unnoticed by his peers. The nomination forms describe him as courteous, organized, personable, a great multitasker and someone who works well under pressure. He is also described as someone who is resourceful, a skill required of someone in his position.

The Franklin County Commissioners congratulated McPaul for his recognition and thanked him for his excellent work and for exuding such a high standard of customer service, excellence and respect to the employees and residents of Franklin County.

“Our veterans affairs team continues to set the standard for other counties across the Commonwealth, and John has been a big reason why,” said Commissioner Chairman Dave Keller.