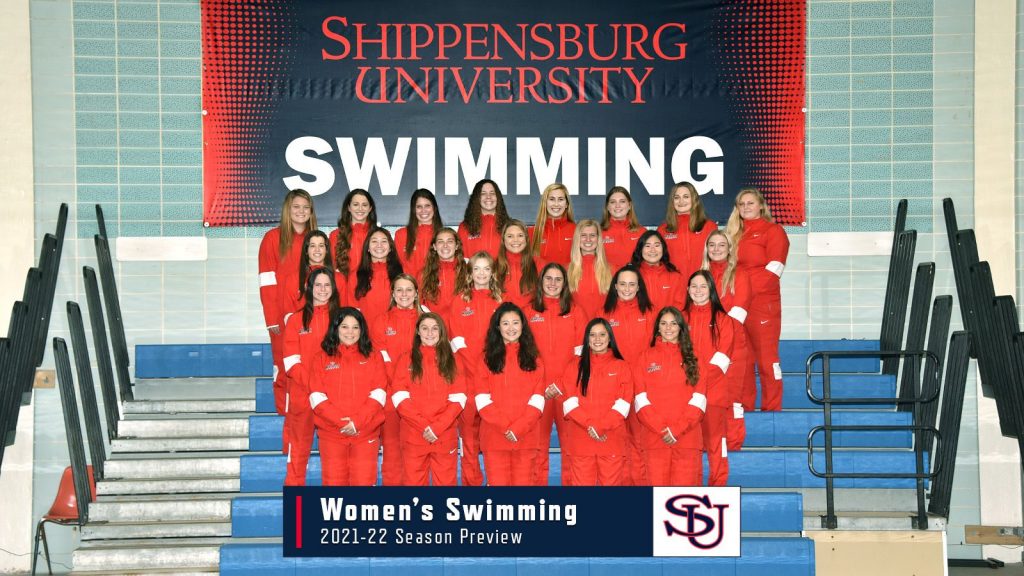 Members of Shippensburg’s women’s swimming program are excited to embark on its first full season of competition in two years. SU returns 21 swimmers to a team that placed third at the 2021 league championships.

The 2021-22 edition of the Raiders is an exciting mix of veterans (eight seniors, five juniors) and talented young members (eight sophomores, five freshmen).

Shippensburg finished third at the 2021 Pennsylvania State Athletic Conference (PSAC) Championships held in April, and the Raiders were motivated by their achievements at the league meet. The performance by the team members brought about some changes as it transitioned into this fall season.

“One of the things we decided to do was start a little bit later,” Verge said. “I actually thought last year worked out really well for us. I think the big focus right now is having fun, coming together, and being excited to be in the pool. Obviously, being sharp in their technique where they can (is important) and working to get better; but at the same time, I really want them to enjoy this phase and have some fun, to be excited about training hard, and seeing improvements here and there.”

Verge has taken to heart lessons learned during last year’s shortened season. One was that his swimmers swam really well on a shorter time frame; and they had fun with it.

“That’s our goal right now,” he said. “To go out and make sure we’re experiencing a really good environment with each other.”

As successful it was, the abbreviated campaign was far different from the traditional six-month season. There is a seeming eagerness among the Raiders to get back to a fall with practice and competition.

“I know a bunch of us feel refreshed coming off of last season,” senior Eva Tice said. “I think we’re coming in here with a clearer mindset of what we want to accomplish this season; given that last season maybe we didn’t have the opportunity to accomplish as much as we wanted to.”

Excitement is indeed one of the key buzzwords for the Raiders during the preseason. Nearly losing out on the opportunity to swim added perspective. Student-athletes have dealt with the adversity of the pandemic, the return to in-person classes, and the rigors of a fall semester.

As Tice said, the day in and day out is indeed exciting and fun, and the team holds a sense of optimism for what it hopes to accomplish. She added that getting back to some sense of normalcy is also key to that positive environment.

“It just excites me to be back with everyone, back practicing together,” Tice said. “We’re not separated in the pool like we were last year, so we’re able to have that one-on-one connection with the people in our lane. I just think all around, we’re just genuinely excited – that’s what I would say the theme is for this season.”

One of the daily keys to success is the work done in practice. Over the course of a six-month season, there are many lessons to be learned.

“Coming off of last year, we didn’t really have that one-on-one competition with each other,” Tice said. “I definitely think pushing each other in the pool and in practice, getting back to that, I think we’ll really thrive in that type of environment.”

Overall, Verge is hopeful that team members will cherish the long journey as they proceed toward the conference meet in February.

“I want everyone on the team to find success swimming,” Verge said. “Best times, if that’s what their goals are, or an enjoyment aspect, or a Top 10 list, or making the conference cut; that’s what we set our sights on. I don’t think we can control, especially in a talent-forward sport like ours, what everybody else is doing. I think we have the ability, if we max out to our best potential, to stay within the Top 5 of the conference, which would be a great goal for us this year.”

Shippensburg begins its season Friday with a tri-meet hosted at by West Chester that features Southern Connecticut State.

Six dual meets are on the schedule, including home dates against IUP (October 13) and Edinboro (January 14).

Team members are especially looking forward to a pair of invitational meets in which the team will likely taper to achieve its season-best times. SU travels to Franklin & Marshall on Nov. 19-21 and to Ithaca on Dec. 3-5. The Raiders will be heading to F&M this year in place of George Mason, the team’s previous invitational destination prior to Thanksgiving.