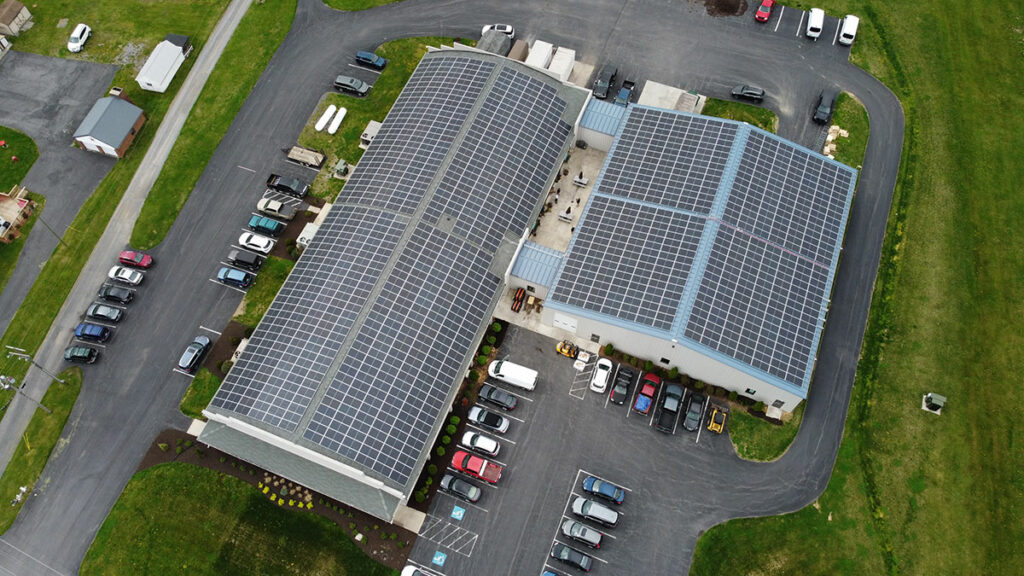 Mercersburg Printing, a commercial design and printing company is one such business. Between printing presses, climate control, and lighting, the company’s energy bills make up a significant portion of its operating expenses.

“We live in an area where the cost of electricity isn’t exorbitant at this point,” shares Doug Shenberger, Owner and President of Mercersburg Printing. “You take a look at some of the other areas of the country where they’re already paying dramatically more for power and realize that may be coming our way.”

Considering solar as an option

When Paradise Energy Solutions initially reached out to Mercersburg Printing as a potential customer, they weren’t sure it was the right move for their business.

“We hadn’t really seriously considered solar all that much,” Shenberger says. “Honestly, I wasn’t tremendously convinced it was going to be something that was a great option for us.”

But when Shenberger saw what his business could save with incentives and just how much free electricity a system could produce, his outlook shifted.

“When we looked at the numbers, and what was available with USDA Grants and tax incentives and how much power the system would actually produce, that was something that surprised us,” Shenberger says.

Between the 26% Solar Investment Tax Credit and 100% Bonus Depreciation, businesses can recoup a significant portion of installation costs in the first year alone. In addition to those widely available incentives, Mercersburg Printing secured a competitive USDA REAP Grants.

A 447.72 kW solar energy system made of 1,092 Axitec solar panels line the roofs of the business’s two buildings, supplying 466,052 kWh of electricity each year. That’s about 60% of the facility’s power.

“That was a lot more than we expected,” Shenberger shares.

The installation of the system required the Paradise Energy Solution’s team to mount the solar panels to the main building’s rounded shingle roof. This is different from typical installations in which the panels are mounted to a flat or pitched roof.

“We had a lot of engineering support to work through how we were going to attach to the rounded trusses and purlins,” shares Project Manager Charlie Allen of Paradise Energy. “We also had to work with our attachment manufacturer to find an attachment that would allow us to connect to those trusses and also maintain the water seal to the shingles.”

The team was able to complete the installation in a way that both looked great and performed well, leaving Mercersburg Printing with a solar system expected to last nearly three decades.

“To be able to basically lock in a price for our electric use, or a large part of our electric use, for many years to come is a way to control a cost point when we see a lot of things difficult to control,” Shenberger says. “We look at that savings as something that can give you a little competitive edge over time.”

But according to Shenberger, saving money isn’t the only benefit of going solar. “There’s also a marketing aspect to that—the ability to be in line with what people are looking for, as far as how their jobs are produced and the impact their jobs are having on the environment.”

Mercersburg Printing will offset 370.5 tons of CO2 each year by utilizing solar-generated energy in place of traditional fossil-fuel-derived electricity. That’s equivalent to saving 8,623.3 trees, or 781.3 barrels of oil.

“It gives you a new appreciation for sunny days,” Shenberger smiles. “To be able to not just have the sunshine, but know that you’re actually producing electricity with it.”