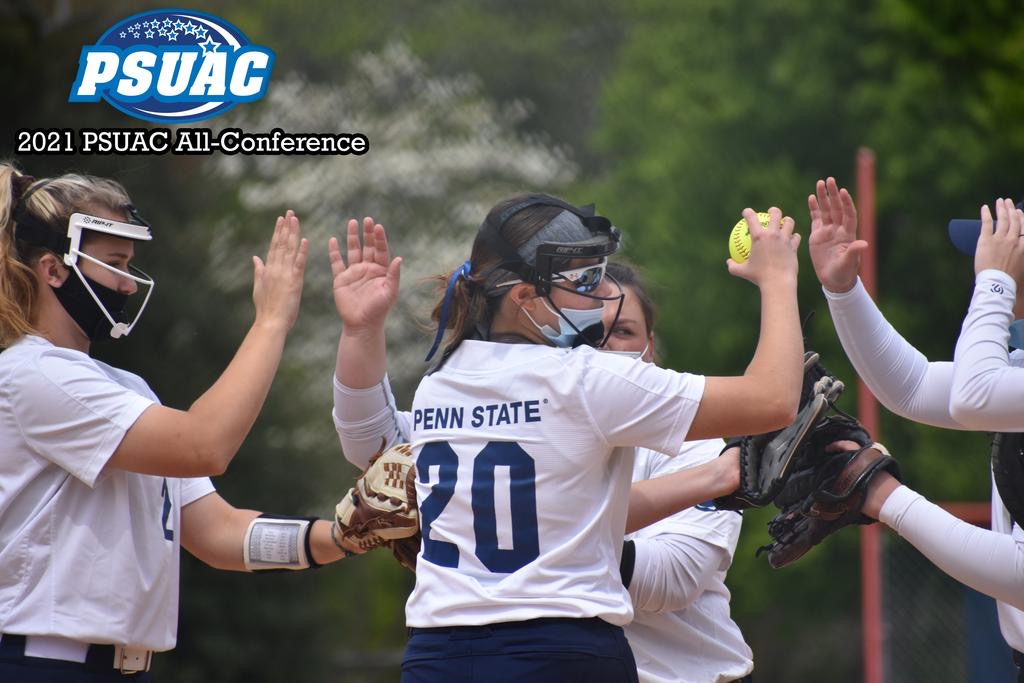 Wagner (Newville, Pa./Big Spring) has arguably revitalized the Mont Alto softball program during her illustrious career on the diamond. She was PSUAC Newcomer of the Year after her freshman campaign in 2018. The shortstop was also a USCAA All-American twice during her time on campus. She is one of the hardest outs in the entire PSUAC as she enters the postseason hitting .402; which includes 12 doubles, two triples and four home runs. Her four homers rank third in the entire USCAA and she has driven in 25 RBIs while also scoring 30 runs so far. Wagner is a slick fielder (.998) and has been a team captain for the past three years.

McKenna Sas (Canyon County, Calif. / Canyon County) has been an immediate force in the middle of the PSUMA lineup this season. The freshman outfielder is hitting.506 across 87 at-bats and her 32 RBIs, both rank second in the USCAA. She has had an astounding 21 extra base hits so far including five home runs. One of the most impressive stats that McKenna has achieved this season is that she has only struck out four times.

Kirsten Dell (Hanover, Pa. / New Oxford) has been another outstanding edition to the Mont Alto softball program that finished the regular season with its best record since 2011 (19-7). Dell has been Mont Alto’s top pitcher. She managed an 8-2 within the circle while striking out 48 opponents with a 4.24 ERA. She also has been a force at the plate in 2021; slashing .386, with 17 RBIs and 29 runs scored entering postseason play.

Wagner, Sas and Dell were also PSUAC First Team honorees along with Destiny Hall (McConnellsburg, Pa. / McConnellsburg) and Skye Herring (Pine Grove, Pa. / Pine Grove Area). Herring, a freshman third baseman, has been utilized as the DP for Mont Alto with her bat especially heating up down the closing stretch of the regular season. She enters the postseason hitting a solid .386, which includes 15 RBIs; and she has also scored nine runs. Meanwhile, Destiny Hall (McConnellsburg, Pa. / McConnellsburg) solidified herself as the starting third baseman for the Nittany Lions. She was a brick wall at the hot corner while also hitting .239 with six doubles and 13 RBIs.

Junior catcher Chelsea Cover (Waynesboro, Pa. / Waynesboro Area) started 24 games so far and has immediately made an impact as a leader behind the plate for Mont Alto. She’s been very solid behind the dish (.991 fielding percentage). The slap hitter concluded the regular season slashing .371 across 70 at-bats. She scored 22 runs, while stealing a team-best 12 bases.

For the first-time in her career, Payton Watkins (Robersdale, Pa. / Forbes Road) was selected as the team’s John Fritz Sportsmanship Award winner. Named after former PSUAC Commissioner John Fritz, the sportsmanship award is given to one player from each team in the league who best displays the core values of the league and sportsmanship to teammates and opponents throughout the season.

Mont Alto (19-7) won the PSUAC West Division during the regular season and will take part in the PSUAC Tournament Sunday when they take on No. 2 seed out of the East Division Penn State DuBois. Game time is 11 a.m. Check for live stats and a live video stream on the Mont Alto schedule page.