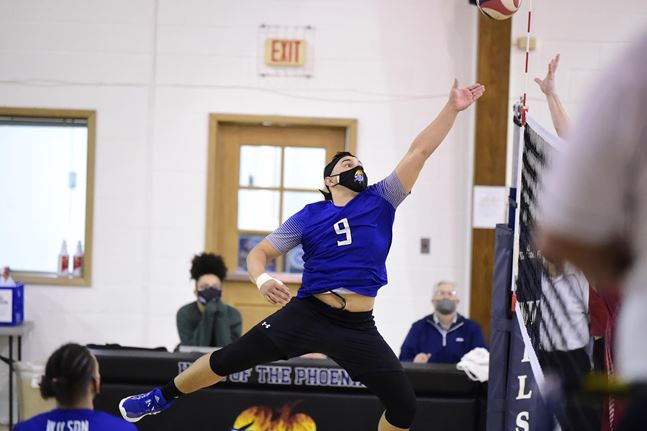 This Wednesday, Wilson College men’s volleyball team had a match against Mount Aloysius. The Mounties defeated The Phoenix with the final score being 3-0.

The first set started with both teams neck and neck early on. After Mount Aloysius took a 12-10 lead, Wilson jumped on a 6-0 run that propelled them in front, 16-12. The run was fueled, in part, by a block from senior Eric Holz (Williamsport, PA., Loyalsock Township). The Mounties snuck back into the match, eventually knotting it up at 19 apiece, but the Phoenix continued to fight and flipped the scoreboard in their favor, 22-19. The two teams duked it out for the final points, but Mount Aloysius walked away with the first set by a final score of 27-25.

Early in the second set, Wilson jumped out to a 5-2 lead. The Mounties tried to overtake the lead, but the Phoenix hung tough, keeping the lead at 12-11. Helping keep their lead was freshman Jackson Cordell (Waynesboro, PA, Waynesboro Area Senior H.S.), who came up with a kill, assisted by junior Noah Wickenheiser (Cresco, PA, Notre Dame), while Holz notched an ace. After that, Mount Aloysius jumped on a nine-point run that gave them a 20-12 lead. Wilson made a late push, but it proved to be too late as they dropped the second set by a score of 25-18. During the push, senior Shae Cardenas (Torrance, CA., West Los Angeles CC) recorded a kill while sophomore Ian Ruiz (Trujillo Alto, Puerto Rico, Colegio y Noviciado Santa Maria del Camino) tallied a kill and an ace.

Both teams came out firing in the third set, as they quickly moved the score to 4-4. The Mounties then took a 7-2 run, which gave them an 11-6 advantage. Later in the set, senior Connor Martin (Warner Robins, GA., Houston County) tallied a kill that helped push the Wilson offense. The Phoenix continued to battle but could not overcome the early deficit as they lost the final set by a score of 25-14.

Wilson will get set for a tri-match on the road against Immaculata and Wilkes on Saturday, February 19, at 1 p.m. and 3 p.m., respectively.