The Center Square describes one man’s struggle to pay for critical medications; and a new Senate bill to mandate pricing transparency by the pharmaceutical industry.

When he was diagnosed with leukemia a dozen years ago, doctors told Paul O’Hara he would live, as he describes it, “a happy and normal life.” So long as he took the critically important drugs prescribed to him, that is.

Then came the sticker shock.

In the early days of his diagnosis, O’Hara, a Doylestown resident, grappled with balancing the cost of monthly prescription. He said those costs were about the same as his mortgage payment.

O’Hara eventually faced foreclosure notices and other challenges to take his medications, though his financial struggles have since improved.

“I am very fortunate to live in a country that has drugs to treat these sorts of conditions,” O’Hara said. “But that’s a lot to put on a cancer survivor – it’s a lot to process.”

State Sens. Dan Laughlin, R-Erie, and Sharif Street, D-Philadelphia, have reintroduced legislation aimed at removing the cloak of mystery around prescription drug pricing. Laughlin and Street had presented a previous iteration ofSenate Bill 579. It didn’t gained traction in the first go-round, however.

If it moves forward this legislative session in the Pennsylvania General Assembly, SB 579 would require prescription drug companies to clearly break down the reason for their costs.

When the issue went before state lawmakers previously, several officials within the industry pointed to research and development as a reason for the pricing.

“I think we are all well aware these pharmaceutical companies provide researches that does result in lifesaving medications,” Laughlin said. “We want them to prosper and be able to continue this work. We just want to know how they arrived at these prices.”

Street said he has heard from constituents who face ongoing challenges for critical prescription medications; sometimes balancing their cost with such staples as food.

“Greater information will allow us to be more responsible legislators,” Street said. “We’ll never be able to get our arms around this without basic information.”

Laughlin and Street readily acknowledged research and development likely is a costly part of the balance sheet; and one of multiple expenses for pharmaceutical companies.

Breaking down the costs

The legislators’ bill also is asking for a detailed breakdown of the costs associated with clinical trials; the amount the companies receive in grants from the government and other sources; and costs related to patents and licensing specific drugs.

Recent polling data suggests SB 579 would have support among Pennsylvanians. According to Altarum, a research organization, 51% of surveyed residents within the state said they are “somewhat” or “very” worried about their ability to afford prescription drugs.

Respondents across the state also reported taking measures such as skipping doses or cutting pills in half to save. The highest concentration – 33% – reported taking such measures in the northwest portion of the state. Other areas hovered around 18 to 19 percent.

“We are seeing a very similar response, regardless of party affiliation,” said Lynn Quincy, a senior adviser with Altarum. “That suggests there is a lot of support.” 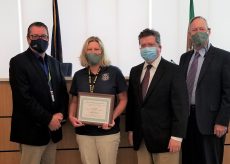 Franklin County: Seville is May Employee of Month