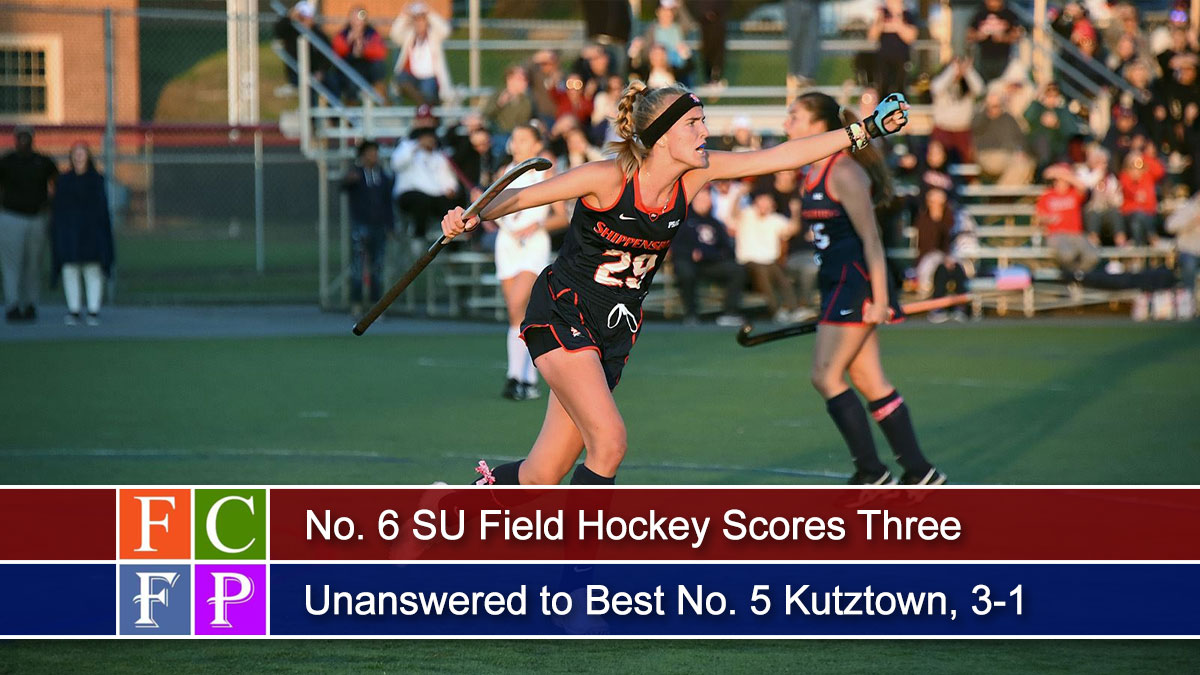 SHIPPENSBURG (Oct. 13, 2019) — The No. 6-ranked Shippensburg University field hockey team scored three unanswered goals in the second half Saturday, including the go-ahead tally with 3:48 to play, to defeat visiting No. 5 Kutztown by a 3-1 margin from Robb Sports Complex.

Shippensburg (7-4, 4-1 PSAC) trailed Kutztown (8-4, 3-2) by a 1-0 margin at halftime but equaled the score off a penalty corner less than three minutes into the second half. Junior Jazmin Petrantonio slammed home her 15th goal of the season off a feed from sophomore Valen Alonso to make it 1-1.

SU out-shot KU by a 9-1 margin in the fourth quarter and out-cornered KU by a 4-1 margin over the same timeframe but Golden Bear goalkeeper Kerri Hanshaw made six of her eight saves in the final 15 minutes to keep the score deadlocked until the final four minutes of play.

Shippensburg’s 12th and final penalty corner proved the difference, with sophomore Jenna Sluymer slapping home the game-winning goal off a feed from Petrantonio to make it 2-1.

The Raiders scored a brilliant insurance goal with 1:02 remaining off a restart in their own end. Sophomore Adrienne McGarrigle snuck a shot through Hanshaw’s legs off a feed from junior Emily Stauffer for her first goal of the year

The play was set up by a long aerial ball sent forward from the SU defensive zone by senior Rosalia Cappadora that found its way to Sluymer, who sent a pass between her legs to Stauffer, who dribbled forward and set up McGarrigle.

Shippensburg finished with an 11-3 edge in shots-on-goal and held a 12-6 margin in penalty corners. Redshirt-sophomore goalkeeper Megan Lay made two saves in the victory.

Saturday marked the second matchup of the season between the two teams. Kutztown won 3-2 in overtime at home back on September 14.

Shippensburg’s next match is an all-important road showdown Wednesday afternoon at undefeated No. 1 West Chester. The Golden Rams won the first meeting of the year at Shippensburg, 1-0 on September 18.

Staff Report - June 6, 2020 0
An avid outdoorsman, Larry enjoyed hunting and fishing with his family and friends. He also enjoyed woodworking and capturing family memories through photography.