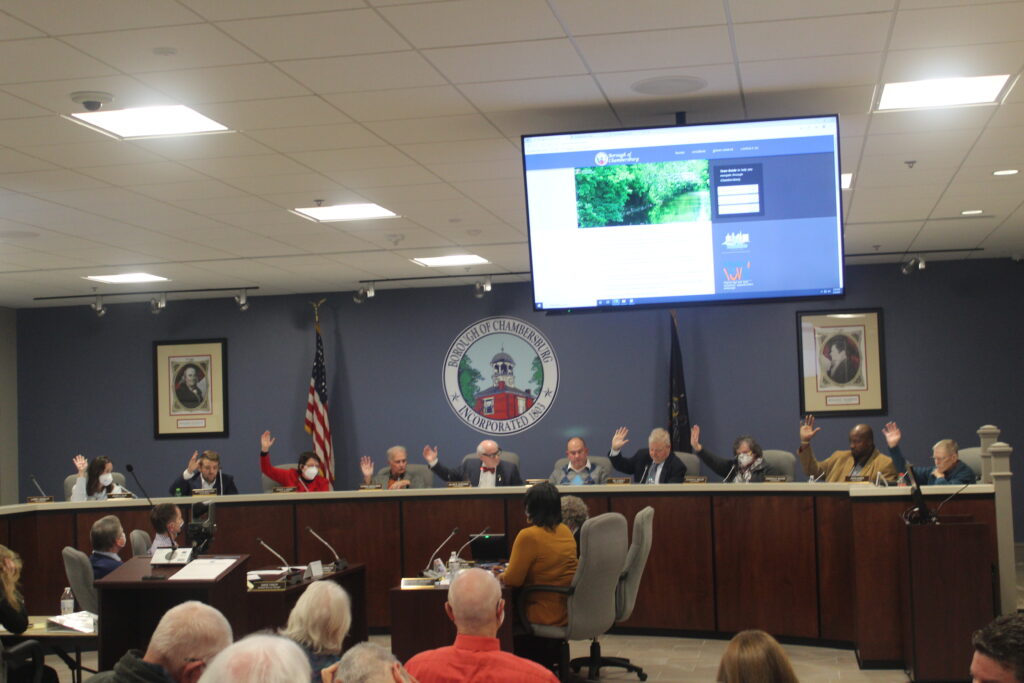 Chambersburg’s four-month-old non-discrimination ordinance died Monday night on a 7-3 vote to rescind the law that added a local layer of protection to its LGBTQ+ population and veterans. The borough became the first of among 70 boroughs with similar laws to repeal its NDO.

Votes were cast along party lines after Borough Council heard over three hours of comments from a packed in-person audience. The crowd overflowed Council Chambers into Borough Hall’s lobby. Almost 200 others viewed the proceedings online, many of them also providing comments.

The vast majority of those comments came from community members urging Council to keep the ordinance in place. Arguments in favor of rescinding it mainly focused on what was seen as flaws that some felt made it unenforceable.

Council’s seven Republicans voted to rescind the ordinance; but they insisted it was not a political issue but instead one of duplication of protections already provided by the state. The board’s three Democrats cast the no votes. All three made impassioned pleas in an attempt to table the issue. They proposed a compromise which would reword it and “give it teeth.”

The ordinance passed on a 7-3 vote last September when Council makeup was reversed, and Democrats were the majority.

A carbon-copy of Gettysburg ordinance

In addition to making discrimination against the LBGTQ community illegal, the ordinance includes protections based on race, color, sex, age, ancestry, national origin, and religious creed. It also includes protections for those that have a GED diploma rather than a high school diploma, a handicap or disability, use a guide or support animal, or are related to a person with a disability.

A week after it was passed in September 2021, then-Mayor Walter Bietsch vetoed it. He said he was concerned because the law (Local Law 2021-07) carried no penalties or provisions that would allow the town’s police department to enforce it. He called it “nothing more than an ideological solution to a non-proven problem” in his official veto message.

Bietsch cited problems with the law:

In Pennsylvania, the mayor in municipalities the size of Chambersburg are the elected head of the community’s police department.

Council overrode the veto the next week.

Some council members voting for repeal argued that the law, identical to nearby Gettysburg’s non-discrimination ordinance, divides instead of unifying the community.

Council Vice President Bill Everly used that argument in making the motion to repeal the ordinance.

Others argued it duplicated the state’s non-discrimination ordinance; Complainants would still have to take their issue to the PA Human Relations board if local mediation didn’t solve it.

Beitsch argued last year that it contained no provisions to force an individual to attend mediation hearings.

Speakers included both members of the local LBGTQ community and supporters; as well as some who felt a repeal gives the community a black eye.

The issue has received widespread publicity in the past few weeks. One individual warned the repeal could lead to Chambersburg’s economic ruin.