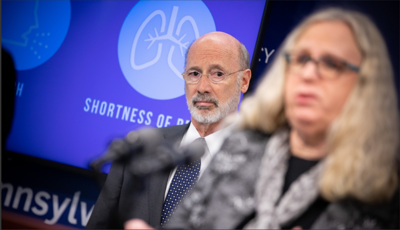 This op-ed piece by PA Rep. Russ Diamond on nursing home data is shared by The Opinion Square.

Last week, I introduced a resolution in the Pennsylvania House of Representatives calling on Pennsylvania Department of Health Secretary Dr. Rachel Levine to either resign or be removed from office by Gov. Tom Wolf.

I do not take my oath of office to my constituents lightly and I do not introduce this resolution to sow division. Hundreds of my constituents have sought help from the Wolf administration during this chaotic government shut down to no avail.

If he will not hear them because his office’s phone has been redirected to the Department of Health, or the phones and live chat at the Department of Labor are constantly busy, or he and Secretary Levine won’t take live questions and follow-ups from the press, then he will hear them through me. That is my duty as an elected state representative.

I introduced this resolution on Monday, May 18, with the backdrop of several editorials in our state press calling for transparency from the Wolf administration, and the shocking recent revelations of the state of our nursing homes that have been wrought by COVID-19.

Pennsylvania far surpassed most of our neighbors in the number of deaths at nursing homes and long-term care facilities. Our facilities are state-licensed yet the number of deaths at these facilities was unknown to anyone outside the Wolf administration until Sunday, May 17. Levine had directed on March 18, 2020, that “nursing care facilities must continue to accept new admissions and receive readmissions,” which “may include stable patients who have had the COVID-19 virus.”

As information began to drip out of the facilities about how they were struggling to receive testing and personal protective equipment from the state, and how nurses and residents were becoming increasingly infected while the rest of the population was largely unaffected, local officials sounded the alarm.

Across Pennsylvania from Beaver County to Lancaster County to Lackawanna County, the story has been the same: hospital beds are mostly empty, but our nursing homes and long-term care centers are a nightmare.

Levine finally released more data to the public, a month after it was requested by House Speaker Mike Turzai, on the demographics of those who have died as a result of COVID-19 in our senior care facilities across the state.

The public also recently found out that Levine removed her own mother from a central Pennsylvania personal care home and checked her into a premium hotel, but did not reveal that fact nor her reasons to the general public until questioned by ABC27 reporters.

This is the health care equivalent of insider trading, except that when it happens in the investment industry, mere dollars are at stake. Human lives were at stake here.

National news reports showed dozens of elderly residents and first responders testing positive, being quarantined and becoming gravely ill in Washington state when the outbreak first began. Instead of heeding that clear warning and working to protect all of our most vulnerable Pennsylvanians, Levine instituted Department of Health policies that halted routine inspections and issued guidance for nursing facilities to admit and readmit patients who tested positive for COVID-19. The American Health Care Association called Levine’s policies “a recipe for disaster.”

Most disturbingly, we now know that the state had an early plan to combat the spread of COVID-19 in these facilities but never implemented it.

In addition, recent state Senate hearings revealed that ECRI – the patient safety and health-care research institute that has a $1 million contract with the department – has only been invited to visit 14 percent of the nearly 500 infected facilities. The Pennsylvania Health Care Association told the Senate that providers were not consulted by the Health Department when implementing their mitigation efforts.

Our most vulnerable Pennsylvanians were being forced to live within a ticking time bomb.

This exceptionally rapid death rate amongst Pennsylvania’s most vulnerable is due to Levine’s lack of responsibility and competence. Levine’s actions have made national news and spurred Congressman Scott Perry to send a formal request to the U.S. Department of Human Services Office of Investigations to immediately open an independent investigation into Levine’s guidance to nursing facilities.

Levine has failed to protect our most vulnerable population, which is her first and foremost task as secretary of Health.

It is time for the governor to find a more competent leader for the Department of Health.

June 30, 2020
Thanks for subscribing! Please check your email for further instructions.