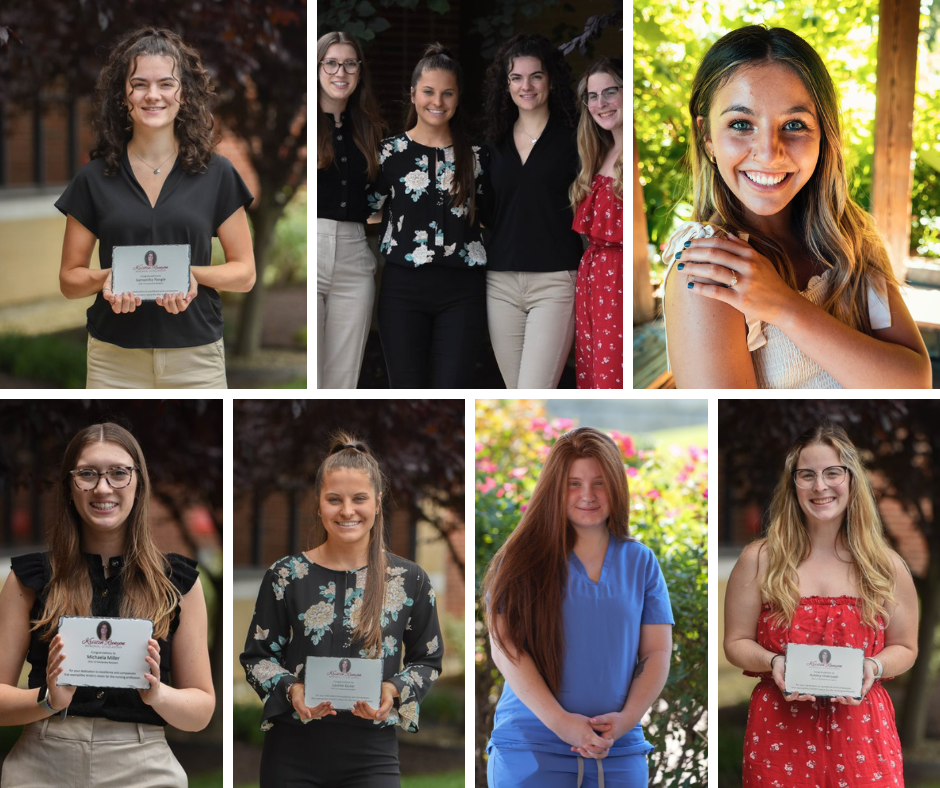 Nurses have shown an abundance of grit and perseverance throughout the last few years in the face of the pandemic and staffing challenges. Kristin Runyon displayed those attributes as a nurse at WellSpan Chambersburg Hospital before she was tragically killed in 2010.

The scholarship was created in memory of Runyon for students enrolled full-time in a registered nurse education program. Applicants must have a minimum grade-point average of 2.8 and live in Franklin County or the surrounding area.

Since its inception in 2011, the scholarship fund has supplied $84,000 to assist 27 nursing students and Barb says it wouldn’t be possible without the generous contributions from family, friends, co-workers, former patients, and the community at large.

Ashley Overcash of Orbisonia, Cierra Burger of Greencastle, Claire Barley and Lauren Guise, both of York, Michaela Miller of Chambersburg, and Sami Pangle of Mechanicsburg were recently awarded the Kristin Runyon Memorial Scholarship to support their nursing education.

“This scholarship has taken huge stress off my back. It allowed me to not have to take any private loans out and instead pay for books using this awarded money. I’m so grateful for this scholarship,” said Cierra, who would like to eventually become a certified registered nurse practitioner or midwife.

“In the beginning, there was a lot of support from physicians and staff to get the scholarship started. I have been so humbled by how it has evolved and the number of people from the community who have felt compelled to support the endeavor over the years,” Barb said. Sami is eager to carry on Kristin’s tradition of compassionate care.

“Winning this scholarship was an incredible honor, as it tells me that I truly stand for and possess those same qualities of excellence, integrity, compassion, and service, that Kristin represented so beautifully throughout her life,” Sami said.

Future plans for Claire include working in the behavioral health unit at WellSpan York Hospital and she says that the scholarship, “validates a lot of hard work I’ve been putting in.” Ashley wants to get her bachelor’s degree and eventually become a psychiatric nurse practitioner. “I think this scholarship is a great way to keep Kristin’s legacy alive,” Ashley said.

Michaela and Lauren were grateful for the scholarship and inspired by Kristin’s legacy. “Kristin embodied compassionate care and that is my favorite aspect of nursing, so I am grateful for this scholarship to help me pursue my dreams of becoming a nurse,” Michaela said. Lauren added, “Kristin serves as a role model for me and nurses in the future.”

“We can never replace Kristin, but we can support nurses to carry on her legacy and help meet the increased demand,” said Barb Runyon, Kristin’s mom.  Christopher Jones was Kristin’s husband. He mistook her for an intruder and shot her in the chest at their home in St. Thomas PA.

Excellence, compassion, integrity, and service – are core values we expect from those we trust to care for us when we are hurt or sick. Kristin Runyon, RN, embodied these qualities, and many more, in her nursing career. Her parents created this scholarship in Kristin’s memory to allow other bright and talented students to follow in her footsteps in becoming outstanding nurses.