Old pitchforks are his passion 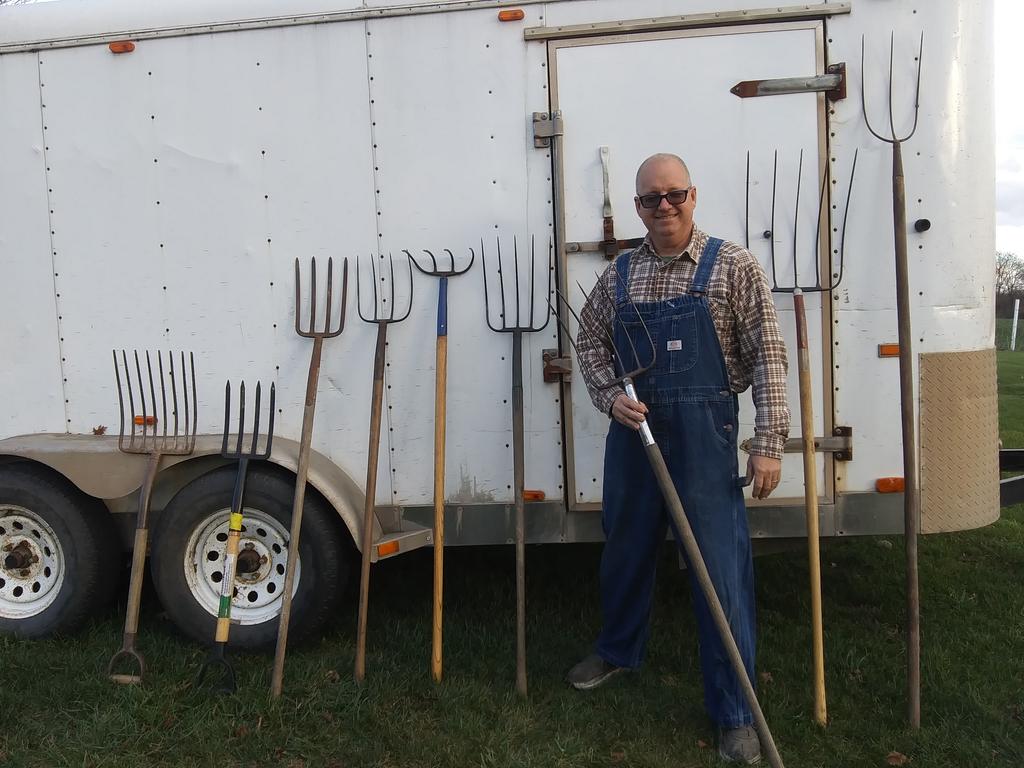 You could say old pitchforks are Bryan Maun’s passion.

It all started 25 years ago, when he was using a pitchfork that had once belonged to his great-grandfather, Emmett C. Lindsay, to fill his pickup with brush, and lost it.

“I do a lot of yard work for people and use a pitchfork to put brush on my truck,” he said. “Its a handy tool for me, something I use a lot.”

The situation was the same 25 years ago. His favorite pitchfork then is still his favorite today, even though his pitchfork choice has broadened over the years.

In fact, you could say that one old family heirloom that had once belonged to his great-grandfather inspired his passion for old pitchforks. It became the basis of a collection that grew over the next 25 years.

When Maun finished filling his Jeep pickup with brush that day, he put the pitchfork on the top of the brush, tied everything down and began the trek from the jobsite in Shippensburg back to his Greencastle farm, with a brief stop in Chambersburg.

This month his story was pick up by researcher Linda Osborn and featured in Franklin County Free Press’ daily history column, Looking Back.

When he got home that evening, the pitchfork was gone. To say he was upset was putting it mildly. This pitchfork might have been old, but it was in excellent shape. It felt right in his hands as he used it. It would later be described as a family heirloom.

Maun wanted his pitchfork back, but he didn’t know where in that 30-mile journey the treasured pitchfork had fallen off the truck. So he decided to run a classified ad in the local newspaper and offer a $50 reward for its return.

It was a pretty big reward to offer for an old pitchfork back then. That’s the equivalent of $85.43  today, factoring in inflation.

“I could have bought a brand new one for less, but I really wanted it back,” he remembers. “I figured if I made the reward high enough, someone might find it and call me.”

A similar pitchfork today, new, would still cost less than the $50 reward, even with prices adjusted for inflation, comparing the price for a five-pronged forged pitchfork on home improvement websites.

A reporter who saw the ad and thought it might make a good human interest story contacted Maun. Soon the lost heirloom pitchfork made the news. “If you found Bryan Maun’s heirloom, please fork it over. He did not pitch it,” the story that appeared in the Saturday, Nov. 11, 1995 issue of Chambersburg’s Public Opinion read.

The power of the press

The story caught the eye of someone who had found a pitchfork in an alleyway behind Pizza Hut in Chambersburg. He immediately called Maun and made arrangements to return it.

The finder at first declined the reward but Maun insisted.

“It was worth every penny,” Maun said. “It had sentimental value. That pitchfork still just feels right in my hands.”

Maun still uses that pitchfork today. You could say its loss and recovery inspired a passion for old pitchforks in Bryan Maun’s life.

In the 25 years since, he has added a number of old pitchforks to what has become a pitchfork collection.

Four hay forks from Maun’s late Uncle Wayne M. Wolfe of Mercersburg joined the collection of old pitchforks, as well as a pitchfork from his good friend, Emory Becker, formerly from Chambersburg.

His most prized possession remains that first pitchfork handed down from his great-grandfather Lindsay through his great-uncle Paul M. Lindsay.

“Using it is half the fun of owning it, because of the sentimental value,” he is quoted as saying in the 1995 story..

Maun was 27 in 1995. He and his wife are still living in his great-grandfather Lindsey’s house on Cool Hollow Road, which they bought from his great-aunt’s estate. It’s the home where they have raised three adoptive daughters, all from different countries.

“We had first right of refusal when she died,” Maun remembers. “She and her sister were two old maids who never married. They were like a second pair of grandmothers to me.”

The ancestral home and his extended family has always been an important part of Maun’s life, even as a child.

“I’ve been mowing the grass and taking care of the flower beds since I was 12 yrs old,” he said. “That’s 40 years of tending to the property that’s been in the family for over a hundred years.”

Back in 1995, Maun was an insurance agent and handyman. He got out of the insurance business about 12 years ago and currently runs two different businesses: a wholesale promotional business and a handyman service.

Over the last 16 years they added three daughters to their family.

“So, yes, my life has changed over the past 25 years,” he said this week, reflecting on the last 25 years. “The adoptions are miracles in themselves.”