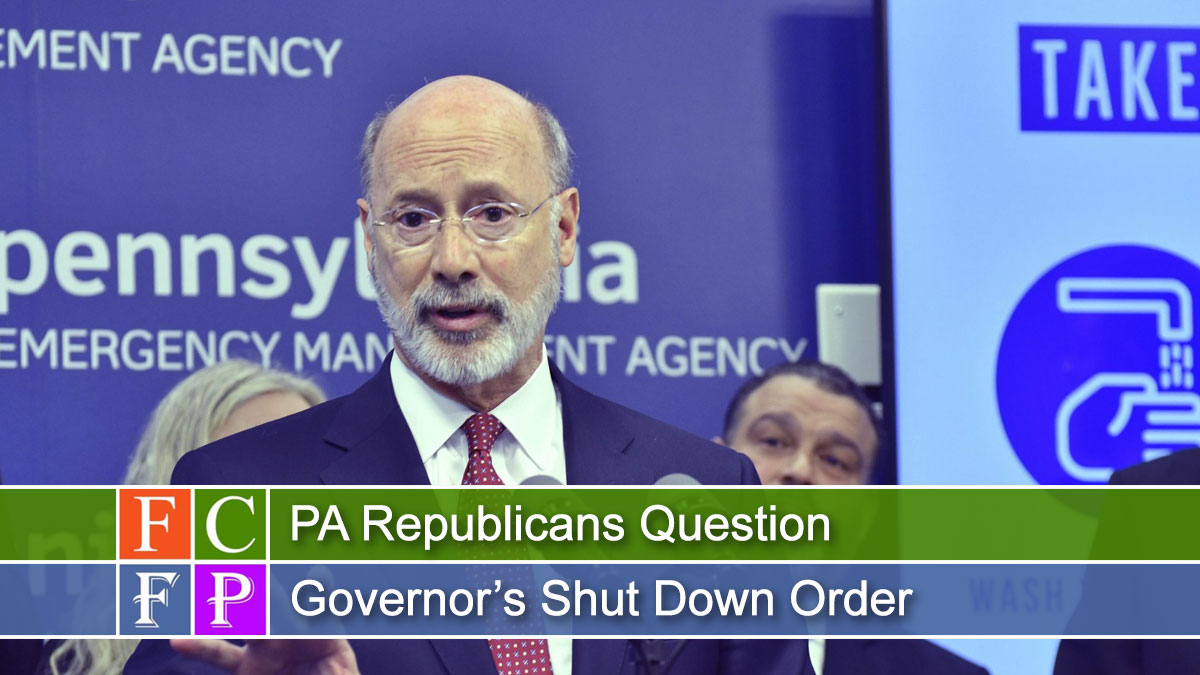 By Christen Smith | The Center Square

Legislative Republicans questioned the constitutionality of Gov. Tom Wolf’s sudden shutdown order for non-life-sustaining businesses, arguing that it caused nothing but chaos and panic across the state.

It’s the latest criticism levied against Wolf’s handling of the coronavirus outbreak – mostly from members of the state’s majority party – which has killed one resident and sickened 268 others.

“The Wolf Administration set off a panic tonight throughout the Commonwealth with its edict to shut down employers,” House GOP leadership said in a news release Thursday evening. “The ill-prepared actions, announced after normal business hours, are not only an economic blow to every worker in the state right now but will have ramifications long into the future.”

The administration said emergency powers awarded during a disaster declaration give it the authority to shutter businesses and protect the public. Wolf said the drastic step became necessary after too many ignored his recommendation Tuesday to shut down for two weeks to mitigate anticipated strain on the health care system from an onslaught of cases, known as “flattening the curve.”

Wolf’s order went into effect 8 p.m. Thursday, though he said enforcement action would begin at 12:01 a.m. Saturday. Businesses that refuse to close could lose their licenses, face criminal prosecution or forfeit disaster aid, among other punishments.

“Before we can save livelihoods, we must save lives,” Wolf said.

House Republicans said the list of non-life-threatening businesses provided by the administration was nonsensical and the economic repercussions so severe that some may never open their doors again.

“The sprawling and confusing list provided by the governor is provided with no explanation, and we will explore all avenues available to us to determine whether the action he’s taken is allowed within our state Constitution,” the leaders said.

Senate Republicans agree the unprecedented situation calls for extreme measures, but said the governor proceeded without much thought or clarity. They asked the administration for an appeals process that businesses could use to stay open without facing extreme enforcement action.

“We understand that we are in uncharted territory as we try to prevent the spread of this deadly disease,” Senate GOP leadership said in a joint release Thursday. “At the same time, we know that every business is life-sustaining to someone – whether employers or employees. The economic devastation that is being caused will last long into the future, especially for small-business owners. Because of the manner in which the Governor released this information, we have more questions about his unilateral decision than there are answers.”

Senate Democrats said Friday they stood “firmly” with the governor’s decision and that lawmakers have been working closely with the Department of Community and Economic Development (DCED) and the Commonwealth Financing Authority (CFA) to arrange emergency funding for businesses impacted by the order.

“We are in the middle of a public health crisis like we have not seen in more than a century, and the Governor’s order will mitigate the threat, flatten the curve and save lives,” Minority leader Jay Costa, D-Allegheny, said.

Senate Democrats have also asked the state Supreme Court to halt evictions and foreclosures; requested utilities suspend service shut-offs; and introduced legislation mandating paid leave for sickened workers or those who must act as caregivers for others.

“Getting through this crisis will require compromise and sacrifice, in the public and private sector,” Costa said. “Our first priority remains keeping people alive and slowing the spread of COVID 19.”

House Minority Leader Frank Dermody, D-Allegheny, said the criticism was likewise “off base.”

“The governor is facing impossible choices and is making decisions based on the advice of medical experts,” he said. “We will continue to work and offer help and guidance to all affected employees and employers. We thank all the business owners who have led the way in this effort and helped prevent the spread of the virus, as well as the medical professionals and first responders who are once again running toward an emergency as others run away.”

Waynesboro to Host an eCycling Event