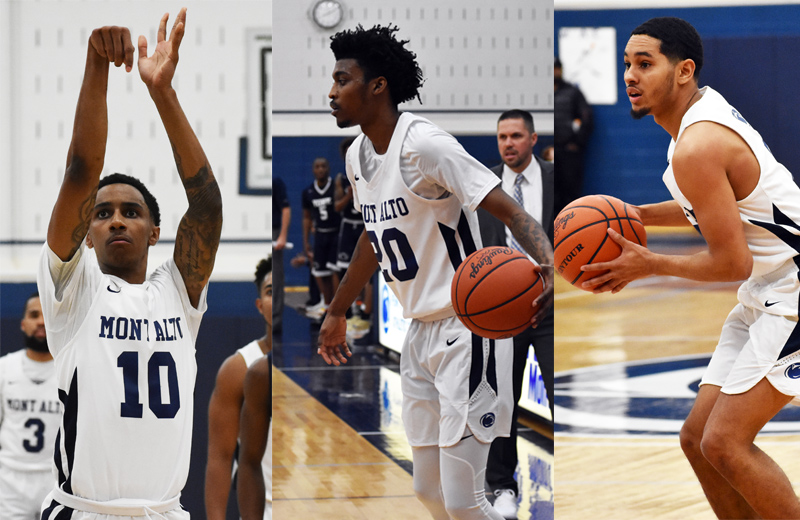 Head coach Jack Schenzel earned the nod as the Coach of the Year, leading his team to the PSUAC West Division crown, finishing the regular season 16-3 in PSUAC play and 20-6 overall.

This was the second time in which he was named Coach of the Year during his eight seasons at Mont Alto.

It has been another impressive year for Smith as he once again led the offense averaging 18.7 points a game in 26 games this season.

Smith also leads the team in rebounding (5.7) and has produced three double-doubles all of which happened against PSUAC competition.

During 21 games versus conference foes, Smith reached 20 or more points on eight occasions, including a 32-point performance on Senior Night against PSU Scranton.

Holston earned all-conference representation for the first time in his career.

He is an all-around player that at times guards the opposing teams leading scorer.

The senior forward averaged 9.7 points per game and shot 36.7 percent from downtown.

Overall, he has grabbed a career-high 100 rebounds and his 34 steals ranked him 19th in the conference.

Flemister is the defensive spark for Mont Alto and has over 35 confirmed charge call in which he has taken according to the Mont Alto coaching staff.

He grabs 4.2 boards per game as a guard while averaging 9.6 points. His 2.0 steals per game rank him third in the PSUAC and is tied for 17th in the USCAA.

He also is one of Mont Alto’s top three-point threats, having splashed 67 three-pointers this season and ranks sixth in the league in three-point shooting (41.0).

Named after former PSUAC Commissioner John Fritz, the sportsmanship award is given to one player from each team in the league who best displays the core values of the league and sportsmanship to teammates and opponents throughout the season.

Roper netted a career-best 29 points in a 98-72 win over Penn State New Kensington on Feb. 13. He has averaged 8.6 points per game this season.

Mont Alto, which fell in the PSUAC Semifinals to eventual conference champions Penn State York, owns a 20-7 record entering the USCAA Tournament which begins next week in Uniontown.

PSUMA received an at-large bid and are the No. 7 seed in the D2 National Championships.

Tournament play will begin on Sunday, March 3 and the Nittany Lions will play Vermont Tech at 4 p.m.