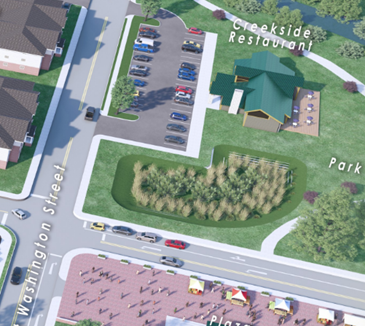 On April 7, 2022, the Chambersburg Area Municipal Authority (CAMA) purchased Phase 1 of the Southgate Shopping Center redevelopment project, which included the part of the shopping center south of W. Washington St., including the large parking lot, the building formerly occupied by Gold’s Gym and the building occupied by various businesses.

On October 13, 2022, CAMA purchased the balance of the shopping center facility, including the part of the center between W. Washington Street and Loudon Street, and between Cedar Street and the Conococheague Creek. This includes the building currently occupied by Rent-A-Center as well as the former home of the JCPenney Auto service facility.

This is also the site of the famous meeting August 19th to 21st, 1859, between Frederick Douglass and John Brown. The two abolitionists met here at a stone quarry and discussed Brown’s plans to raid the federal arsenal at Harpers Ferry. He urged Douglass to join an armed demonstration against slavery. Douglass refused, warning the raid would fail; the October 16, 1859 attack confirmed his fears. Brown was captured with his surviving followers and was executed December 2, 1859.

Finally, this transaction also cleared up the title to the small parking lot on the east side of Cedar Street, generally referred to as the I-Hop parking lot; which will also be owned by CAMA.

These transactions have resulted in CAMA being the owner of all of the Southgate Shopping Center.

In 2021, Town Council approved a list of projects to utilize the Borough’s share of American Rescue Plan Act, Coronavirus State and Local Fiscal Recovery Funds. This Federal grant, with no local match requirement, will fund eight transformational projects in the Borough, including subsidies for low-income utility customers, landlords, restaurant owners, extensive improvements to the Borough storm sewer system, the purchase of a dilapidated warehouse on S. Fourth St. and the Southgate Shopping Center. These projects were important goals in the 2022 Borough budget that was approved in December 2021.

Town Council and the former owners, Franklin Southgate, LLC, reached a negotiated sales agreement to permit CAMA the opportunity to purchase the shopping center so it could be subdivided and resold to private third-party developers for redevelopment. In 2021, Town Council authorized the execution of an Agreement of Sale for the purchase of the property, for a total price of $4,500,000 for both phases, with the Federal funding to provide any necessary money to accomplish the purchase of Phase 1 and all of Phase 2. By using the Federal funding, CAMA is able to obtain control of the site, something no other private developer has been able to do for generations. This is because of the Borough obtaining the Federal grant, which allows the project to make financial sense. The project is to be funded without any Borough taxes. In addition to no local taxpayer money being used, none of the Federal funding recovered through the resale of the site will need to be returned to the Federal government. Town Council can reprogram any money recovered by resale for use at the shopping center or at any other eligible community and economic development project in the Borough.

On August 25, 2022, the Chambersburg Area Municipal Authority (CAMA) reached an agreement to sell the former Gold’s Gym building at the Southgate Shopping Center to Keystone Health. Keystone Health is the only federally qualified Community Health Center serving Franklin County. With more than 540 employees and serving more than 59,000 patients annually, Keystone’s Community Health Center is characterized by five essential elements that differentiate them from other providers.

Phase 2 was included in the original sales agreement already approved by the parties and is included in the original price of $4.5 million. Control of Phase 2 was merely delayed in the original agreement timetable to allow the balance of the federal money to be remitted to the Borough; which has happened. Just as with Phase 1, the acquisition is being fully funded by the American Rescue Plan Act (ARPA) by proceeds already received by the Borough of Chambersburg for this project from the U.S. Treasury Department. Just as with Phase 1, the Borough will provide those grant funds to the Chambersburg Area Municipal Authority, who will in turn assign the Borough as the property manager.

Unlike Phase 1, which will be mostly resold, the Borough will retain a part of the Phase 2 property and CAMA for stormwater management as an existing large drainage basin passes through this property on the way to the creek. The stormwater management area can also be used for passive recreation and creek access. Those plans have not yet been completed.

Questions about the Southgate Shopping Center redevelopment project should be directed to Guy Shaul, Community & Economic Development Specialist, at 717-251-2446 or gshaul@chambersburgpa.gov.