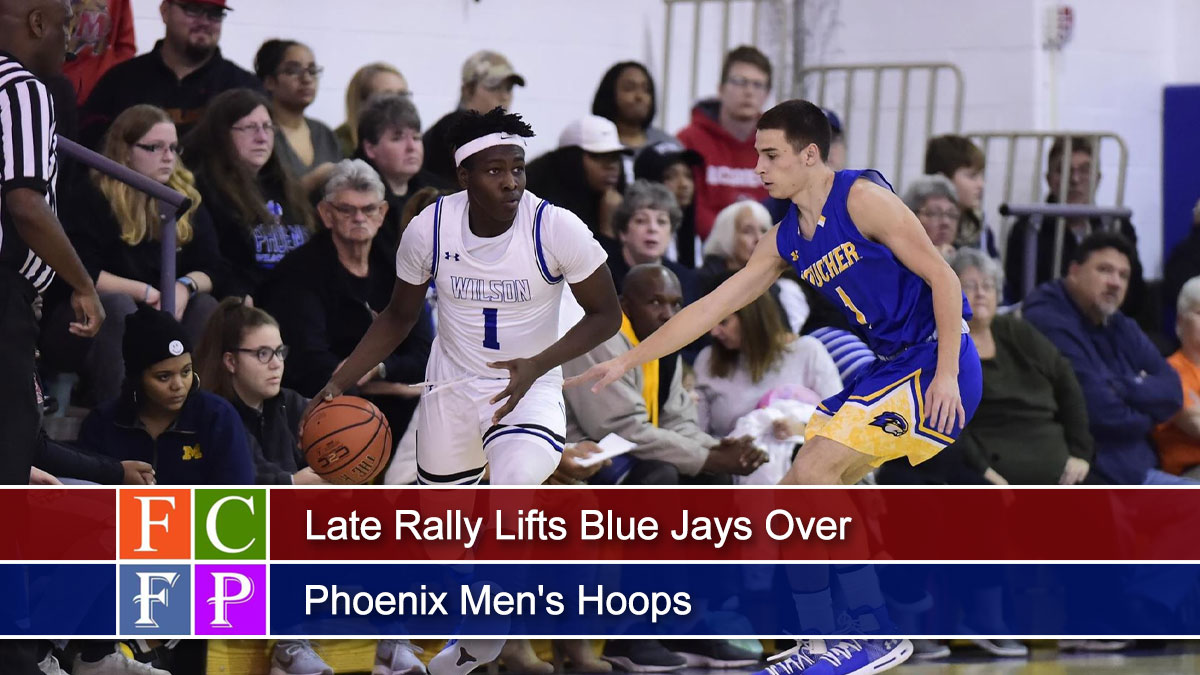 The Wilson College men’s basketball team opened the 2019-20 season on the road versus Elizabethtown College in non-conference action. The host Blue Jays (1-0) rallied late in the second half to top the Phoenix (0-1) 82-77.

The Phoenix got their first points when sophomore Olamide Banjo (Largo, MD, Largo HS) drilled his first jumper of the season. The first lead came a few minutes later when Junior Christian Evans (Baltimore, MD, Our Lady Of Mount Carmel) knocked down a jumper. The play gave the Phoenix a 6-5 lead.

A back and forth battle ensued for the opening ten minutes. A steal and a layup by sophomore Adrian Thomas (Germantown, MD, Northwest HS) pushed the team’s lead to 24-17. With under three minutes left in the half, a three-pointer by sophomore Jeremiah Delaney(Manassas, VA, Osbourn) gave the Phoenix a 34-25 lead. An 8-0 run by the Blue Jays closed out the half, cutting that lead to 34-33 at the intermission.

Trailing by two early in the second half, the Phoenix used a 12-2 run to take a 46-38 lead. A three-pointer by Thomas with an assist from junior Kyle Hoffman(Waynesboro, PA, Waynesboro) followed by a steal and a monster dunk by sophomore Anthony Desruisseau (Burtonsville, MD, Springbrook HS). That brought the Phoenix lead to 60-46 with just over ten minutes left in regulation.

The Blue Jays answered with an 8-0 run, taking advantage of a turnover and a few empty possessions by the Phoenix to pull within 62-56.

Bean answered with another bucket. Then another free throw and a steal leading to a fast break by the Blue Jays knotted the game at 69-69. There was 3:36 minutes left on the clock.

Trailing by one, the Phoenix got a jumper by Evans to go up 75-74. The Blue Jays answered with a layup. A clutch shot by Thomas put the Phoenix back on top 77-76 with just over a minute remaining.

The Phoenix couldn’t get a shot to fall in the final minute of play. The Blue Jays closed it out at the free throw line with an 82-77 win.

The Phoenix had four players score in double-digits led by Thomas with 19 points. Evans added 14 points and Delaney had 12 points including 3-of-6 from downtown.

Bean tallied 11 points and 6 boards while the team forced 12 turnovers which they converted into 33 points.

The Blue Jays held a 36-28 edge in points in the paint. The Phoenix had a 22-6 advantage in fast break points.

Wilson will face Hood College in the home opener on Wednesday at 7:00 p.m.

March 6, 2020
Thanks for subscribing! Please check your email for further instructions.