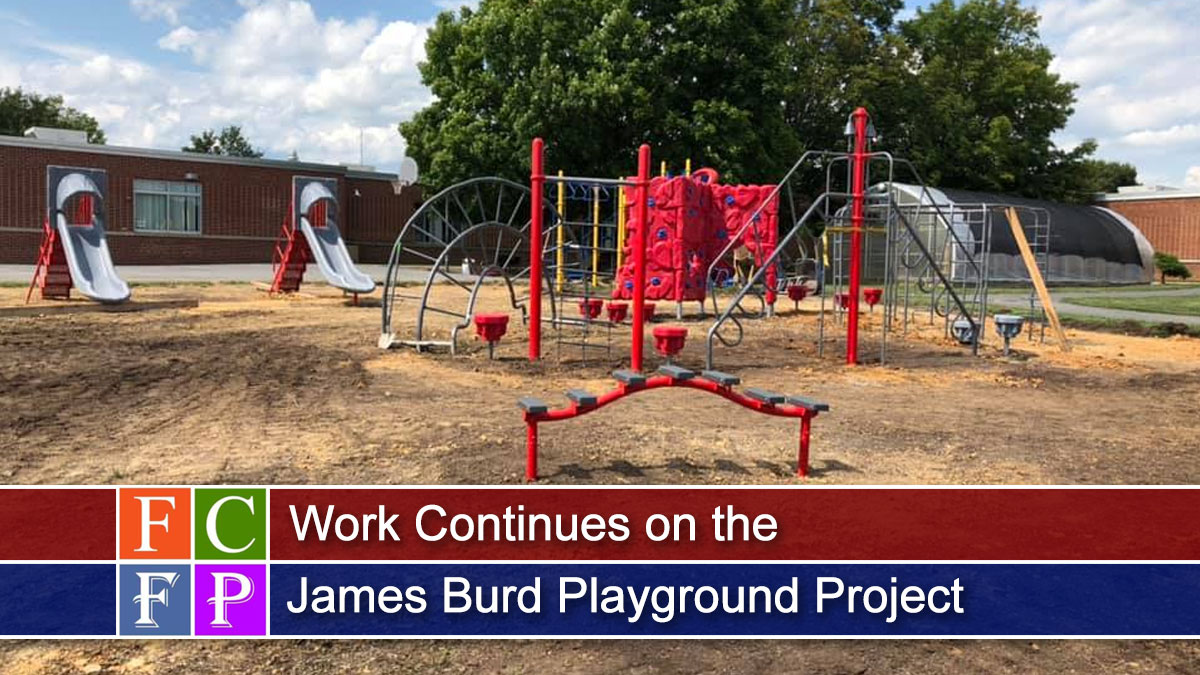 SHIPPENSBURG (Aug. 8, 2019) — Local residents leaned something Thursday. Building a playground together is a lot of hard work, but lots of fun.

Dozens of people worked together to install slides, swings and other playground equipment at James Burd Elementary School.

“It’s been a process but so much fun to see this go from concept to reality,” said Angi Jackson.

The equipment, and its installation, cost Shippensburg Area School District nothing, thanks to the generosity and hard work of donors like JLG and the local community.

Jackson is a JB Burd parent and works for JLG, one of the main sponsors of the project. She was instrumental in bringing the project to fruition, from its inception through the “build” project Thursday.

“JLG has this fantastic program for community engagement,” she said during a lull at the school Thursday afternoon. Jackson felt the school might be a good fit for that program.

So she took action after talking to Principal Scott Shapiro about the school’s need for new playground equipment.

She soon had a commitment from JLG for a $25,000 matching grant for the project. A community fundraising drive for the matching money brought commitments from the Greyhound Foundation, PA Partnership for Better Health, and the Shippensburg American Legion.

Organizers came up with the idea of a community build project to put together and install the equipment as a cost-saving measure.

That way they could put their funds into a little more playground equipment.

“A community build is a more cost-efficient effort,” Jackson said. “It also allows the community to participate and have a sense of ownership with it.”

JLG employees stepped up to the plate in the build phase of the project too.

Some used those hours to help with the playground project.

So on Thursday, employees from JLG and Jerr-Dan, representing the Access Segment of Oshkosh Corporation, and the Shippensburg community worked together to build and install a new, inclusive playground for students.

The day began with a groundbreaking at 8 a.m. attended by all the financial donors, Shippensburg Area School District officials and the community.

By early afternoon most of the work was done.

On Friday the last few pieces of equipment will be added and mulch will be spread over the playground. When school starts Aug. 22, James Burd Elementary School students will have a new playground, thanks to their community.

“It has been phenomenal,” Jackson said of the project.

Staff Report - July 6, 2020 0
She was a longtime member of the Grandpoint Church in Chambersburg. She enjoyed sewing, camping and loved cats.

September 10, 2019
Thanks for subscribing! Please check your email for further instructions.