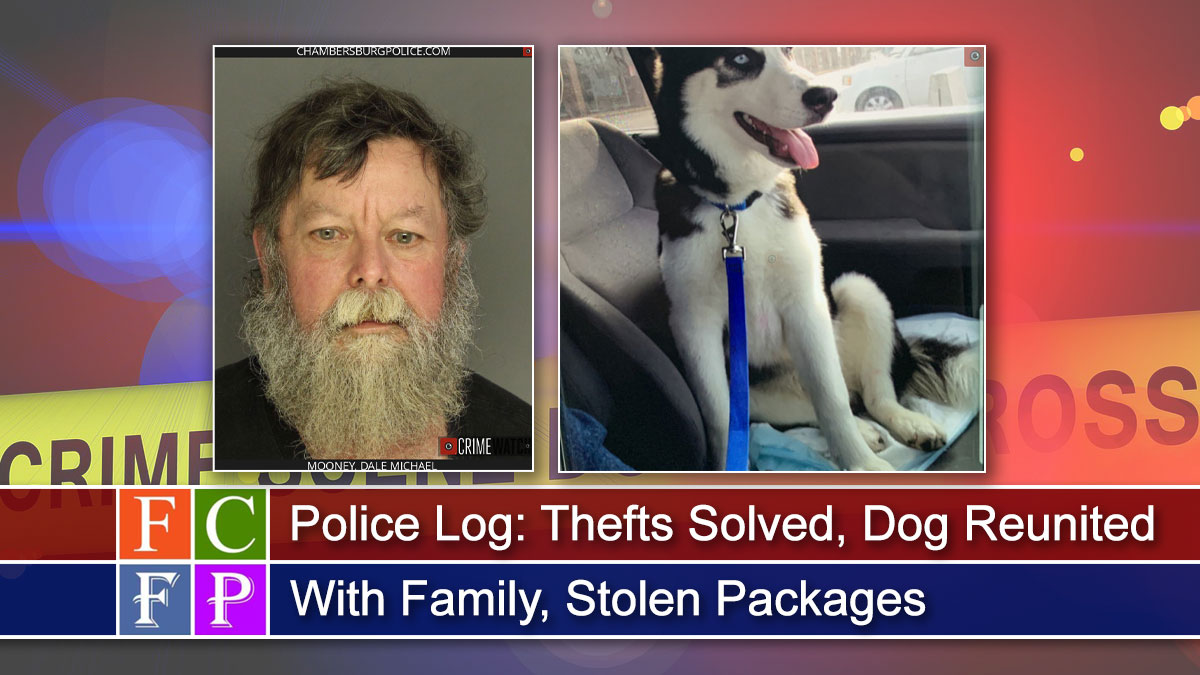 Local police made an arrest, reunited a dog with its owner, investigated a couple of other crimes and was looking for someone who stole some packages as 2019 ended.

Chambersburg police arrested Dale M. Mooney, 59, following an investigation into an unattended death in the 20 block of Butternut Lane.

They were called to the residence at 3:36 p.m. a police reported an investigation implicated Mooney in the disappearance of a .22 caliber firearm and the dead man’s debit card. He allegedly used the card to take several hundred dollars from the man’s bank account. Police said Mooney admitted to stealing the victim’s money and the firearm.  The firearm was recovered by the Chambersburg Police.

THEFT ARREST: A local man suspected of stealing a set of keys and key fob at Coyle Free Library Monday was seen the next day by a Chambersburg police officer, who thought he matched the photo of the thief caught on surveillance cameras.

The officer stopped Tayshon Quivers, 23, in the area of West Catherine Street and Linden Avenue for questioning. Police said Quivers still had the keys and key fob in his possession.

Manns released him on his own recognizance with the provision that he shows up in court for a preliminary hearing Jan. 14.

LOST DOG: A lost dog was reunited with its owner Tuesday, just hours after it went missing in Chambersburg.

The five-month-old black-and-white Siberian Husky with strikingly bright blue eyes was reported missing by its owner at 5:05 p.m. yesterday. A police report said the dog was last seen in the 400 block of West Washington Street. In their update reported, police did not give details about the Husky’s return home.

PACKAGE STOLEN: Chambersburg police ask for the public’s help in an investigation into the theft of a package containing two Apple iWatches last month.

Police said the package was left at a home in the 200 block of Birch Street in Chambersburg Nov. 29. The package was stolen before being retrieved by the victim. The theft was reported to police Dec. 20.

Anyone with information about the stolen package is asked to contact the Chambersburg Police Department at 264-4131.

Police didn’t say where the crash happened in their report. They are looking for the pickup truck pictured in the above surveillance photo, however. The driver did not stop to exchange information.  Anyone with information relating to this incident should contact the Chambersburg Police Department in person or by phone at (717) 264-4131.

SCATTERING RUBBISH: Sometime between Dec. 24-31 someone dumped a mattress on the property of Gearhouse Brewing Co., 253 Grant St.

Anyone with information on the person(s) responsible contact the Chambersburg Police Dept. at 717-264-4131.