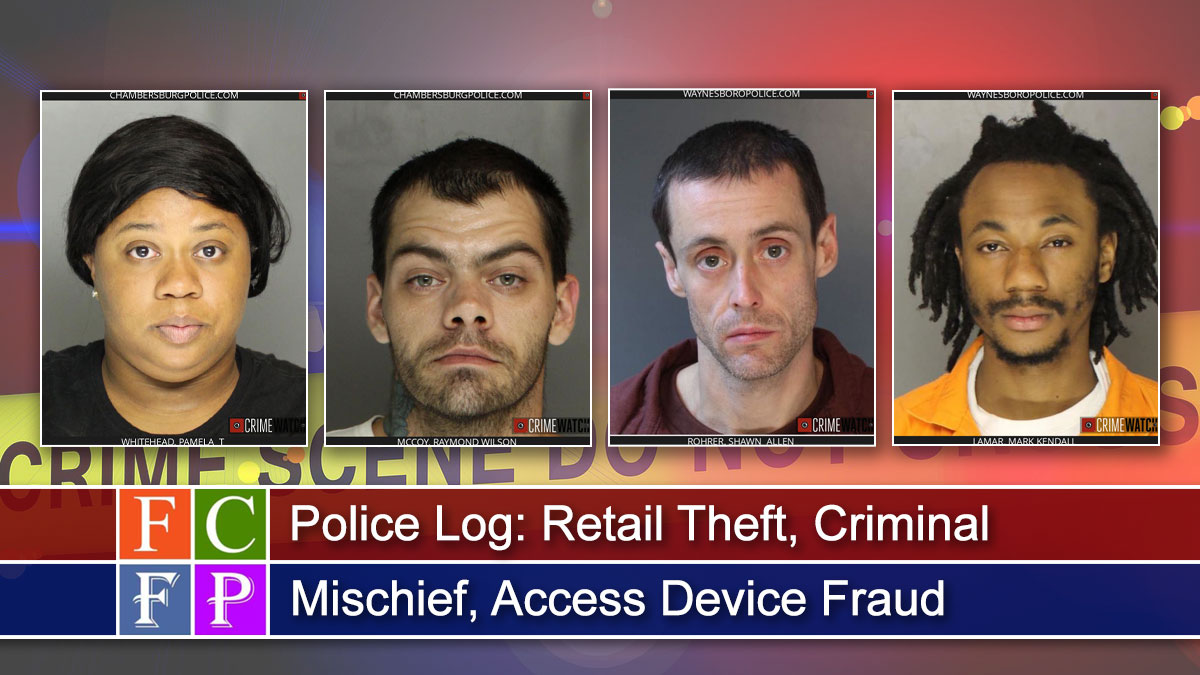 Area police investigated retail thefts, hit and runs, criminal mischief and a number of other incidents over the last two weeks.

RETAIL THEFT: On Jan. 3 The Wine & Spirits Store located at 987 Wayne Ave. reported a theft of a bottle of Patron Tequila valued at $52.99. Further investigation revealed that Pamela Whitehead, 28, was observed concealing the bottle of Tequila in her purse before departing the store without purchasing the item. On Jan. 10

Whitehead was charged with one count of Retail Theft (M2) after admitting her actions in this incident.

CRIMINAL MISCHIEF: On Jan. 4 at 5:45 p.m., CPD  responded to the 939 Wayne Avenue Puff-N-Snuff for a reported Criminal Mischief. Investigation revealed Raymond McCoy, 31, damaged the outer door of the business after having a verbal altercation with the cashier.

He was subsequently charged with one count of Criminal Mischief.

The time frame the parking meter pole was struck is unknown. Anyone with information is asked to contact the Chambersburg Police Department or submit a tip on Crimewatch.

THEFT, ACCESS DEVICE FRAUD: On 11/11/2019, a credit card was stolen from a mailbox along Industrial Dr in Chambersburg, Franklin County.  The stolen credit card was used at the Walmart in Hagerstown, MD located on Walmart Dr at 1609 hours.  A black male purchased a television and left the area in a white Jeep.

The suspect was wearing a striped, gray sweatshirt, black pants, and blue, white, and red shoes.  The driver of the Jeep was a white male with facial hair.  Another male wearing a red jacket was in the vehicle.  The vehicle did not have an attached license plate. The persons shown in these photos may have information relevant to an ongoing police investigation. They are a person of interest, but not necessarily a suspect at this time.

If anyone has information relating to this incident or knows the identity of the actor they should submit a tip through Crimewatch or contact the Chambersburg Police Department in person or by phone at (717) 264-4131.

MAKING TERRORISTIC THREATS: Shawn A. Rohrer, 35, Waynesboro, has been charged with terroristic threats after an incident occurred on December 31 at 4:33 p.m. on S. Potomac Street.

SIMPLE ASSAULT, HARASSMENT: Mark K. Lamar, Waynesboro, has been charged with one count each of simple assault and harassment after a domestic occurred on December 22 at 12:35 p.m. on Mt. Vernon Terrace.

DUI: Diane M. Pucciarella, Chambersburg, has been charged with two counts of driving under the influence of alcohol and/or a controlled substance after police made contact with her on December 19 at 3:21 a.m. on Hamilton Avenue.

INVASION OF PRIVACY: Bradley L. Dinger, 27, Fairfield, has been charged with invasion of privacy after an incident occurred on November 15, 2019, at 7:18 a.m. on Hawbaker Avenue.

ENDANGERING CHILDREN: Cassandra N. Schook, 29, Waynesboro, has been charged with one count of endangering the welfare of children as the result an incident Reported to police at 9:11 a.m. December 7 on N. Church Street.