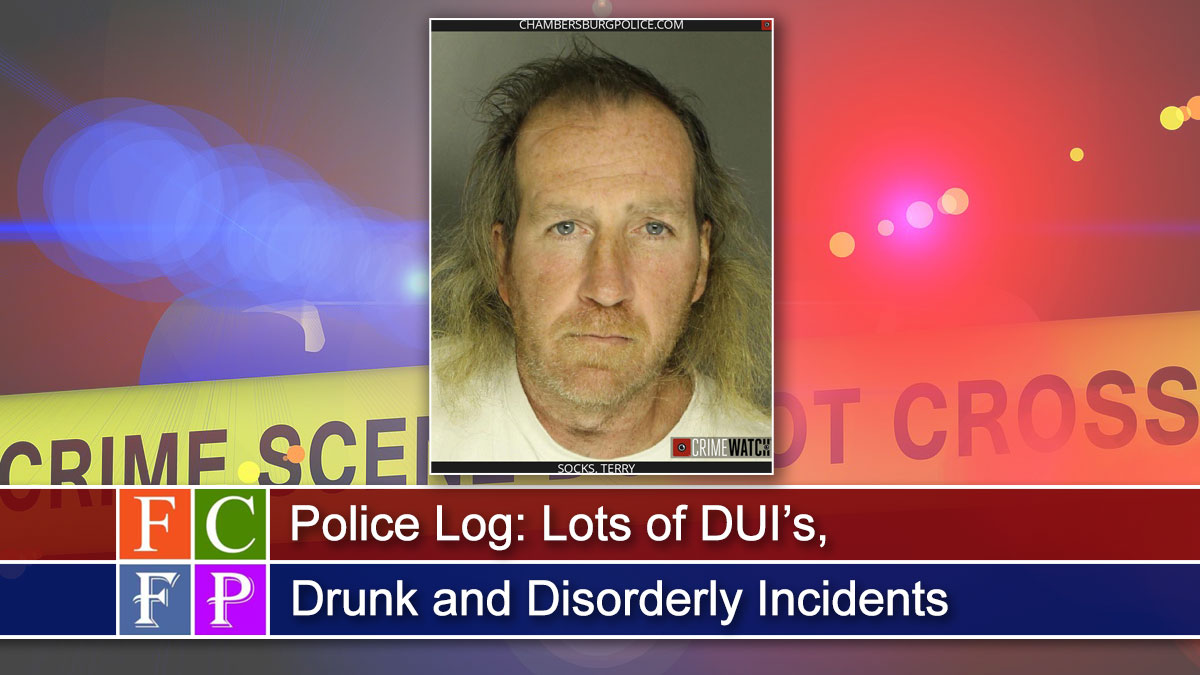 Local police investigated incidents that resulted in DUI arrests in Chambersburg last weekend, while Waynesboro reported a variety of investigations going back to December for summary offenses, including harassment and disorderly conduct.

DUI: On Jan. 12 at 1:59 a.m., a traffic stop was conducted on a silver Toyota Camry that was going the wrong way on South Main Street.  Investigation revealed that the driver of the vehicle, Feliciano Velasquez Lopez, 34, was under the influence of alcohol and had a BAC level of .168%.  Velasquez Lopez is being charged with two counts DUI and an additional summary violation.

DUI: On Jan. 11 9:11 p.m., CPD responded to the 300 block of East King Street for a report of an accident involving two parked vehicles.

Upon investigation, it was found that the driver of the striking vehicle, Terry Socks, 48, was under the influence of alcohol and had a BAC level of .177%.  Socks is being charged with two counts DUI.

DUI: On Jan. 11 at 1:18 a.m., CPD conducted a traffic stop on a silver Toyota Camry that struck the curb in the 400 block of Hollywell Avenue.  Investigation revealed that the driver of the vehicle, Sica Clemente, 29, was under the influence of alcohol and had a BAC level of .185%.  Clemente is being charged with DUI highest rate and two additional charges.

DUI: On Jan. 11 at 3:08 a.m., Chambersburg Police observed a vehicle run a red light on South Second Street at East Queen Street.  This vehicle was stopped and the operator, Max Mercado-Marrero, 28, was found to be under the influence of alcohol.  Mercado-Marrero was charged with DUI.

CRASH: Jamie D. Rhoads, Hagerstown, has been cited for accidents involving damage to unattended property after a hit and run occurred on Dec. 10 at 2:04 p.m. on W. Main Street.

SCATTERING RUBBISH: David L.B. Oliver, Waynesboro, has been cited for scattering rubbish after trash was left at a business on West Main Street on Dec. 11 at 9:49 a.m.

PUBLIC DRUNKENNESS: Brian E. Miller, Waynesboro, has been cited for public drunkenness after police received a report of an intoxicated subject on Mt. Vernon Terrace on Dec. 21 at 8:27 p.m.

FALSE REPORTS: A 16-year-old male has been charged with False Reports to Law Enforcement Authorities after an incident occurred on Dec. 22 at 8:17 p.m.

HARASSMENT: Cody L. Leidig, Greencastle, has been cited for harassment after an incident occurred on Dec. 30 at 7:02 p.m. on Elder Avenue.

DISORDERLY: Latoya N. Walters and Brian T. McCartney, both of Chambersburg, were cited for disorderly conduct after an argument occurred on Dec. 31 at 3:09 p.m. on South Church Street.

Vicky Taylor - April 2, 2020 0
While the numbers on COVID-19 cases continue to climb in Franklin, Cumberland and Adams, the numbers are growing faster in the southeastern part of the state around Philadelphia and the northwestern side where Pittsburgh is located.