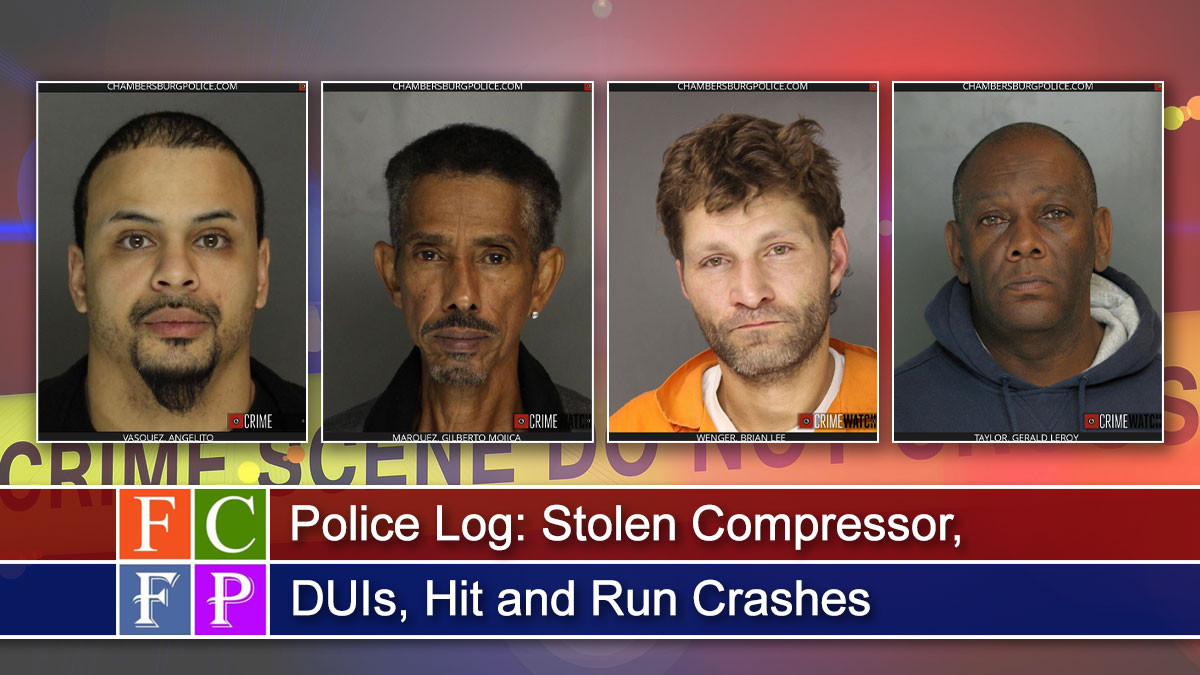 Area police investigated a number of alcohol-related crimes during the week between Christmas and New Year, as well as a criminal mischief incident.

THEFT: Chambersburg Police Department is asking for the public’s help in solving a theft reported on Dec. 10. Police said someone stole an air conditioner compressor unit from a 2000 Dodge Durango parked in the 200 block of Pomeroy Court.

Anyone with information about the crime is asked to contact Chambersburg Police at 717-264-4131.

Police arrested Angelico Vasquez, 33, after he crashed the vehicle he was driving into an East Washington Street house at 8:10 a.m. and fled the scene. Vasquez was located a short time later, still operating the vehicle involved in the hit and run. His blood alcohol level was above .16, twice the legal limit, according to court records.

Anyone with information regarding this incident is asked to contact the Chambersburg Police Department at 717-264-4131.

PUBLIC DRUNKENNESS: Chambersburg Police Department responded to the 300 block of East Queen Street At 6:03 a.m. New Years Day for a report that a man who had fallen down in the roadway.

Police said they found a highly-intoxicated Gilberto Mojica-Marquez, 63, Chambersburg, in the road. Mojica-Marquez was released to a sober party, and a citation was filed for public drunkenness.

Police allege that Lagos-Godinez struck an occupied vehicle and left the scene of the accident without providing the victim with his name and insurance information.  Lagos-Godinez was charged with one count of accidents involving damage to the attended vehicle.

DUI: Brian Wenger, 39, Newburg, faces a driving under the influence charge as the result of a traffic stop at 3:35 a.m. Dec. 30 in Chambersburg for a traffic violation. Police said Wenger was found to be under the influence of an alcoholic beverage and was also found to have a suspended driver’s license from a prior DUI.

Wenger was also in possession of an open container of Four LOCO during the stop. Wenger is charged with DUI as well as four summary charges.

Taylor was located and found to be under the influence of alcohol.  Taylor was charged with DUI and two additional charges.

DUI: Police arrested Colby Coy, 25, Dec. 19 and charged him with driving under the influence of alcohol following a crash at 9:38 p.m. at the intersection of Lincoln Way East and Walker Road.

An investigation revealed that Coy turned left onto Lincoln Way East from Walker Rpa d from the improper lane, causing the crash.

Coy‘s blood alcohol content was .180%, police said.  Coy was charged with one count DUI highest rate of alcohol and an additional summary offense.

DRUG CHARGES: Waynesboro police charged Barris C. Williams, 29, Hagerstown, with possession of a small amount of marijuana after a traffic stop was conducted on November 27 at 11:20 p.m. on West Third Street.