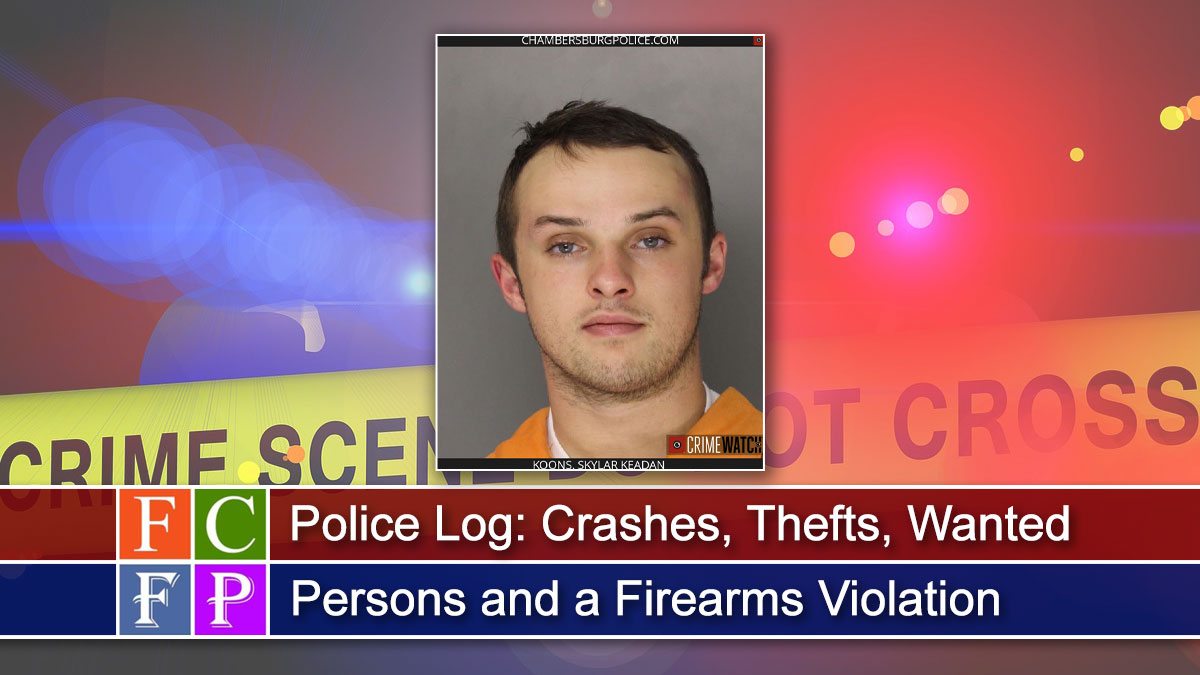 Area police looking for a suspect who vandalized a car this weekend and has made an arrest for public intoxication and firearms violations. State police investigating an auto accident and the theft of $7 and a credit card.

RESISTING ARREST – Chambersburg police arrested Skylar Koons, 21, Chambersburg, at about 11 p.m. Jan. 14 after he was reportedly staggering and under the influence of synthetic marijuana in a parking lot in the 100 block of North Main Street.

During contact with Koons, he fled on foot and was apprehended a short distance away.  Koons was charged with Resisting Arrest and Public Drunkenness or Similar Conduct and subsequently transported to Franklin County Jail.

During a search incident to arrest, a handgun was located within the waistband of the juvenile. The juvenile was a convicted felon, concealed the handgun without a license and was also a minor.  The juvenile was subsequently charged for the violations.  He was placed in Abraxas by juvenile probation pending hearings.

CRIMINAL MISCHIEF – The Chambersburg police responded to an address on South Coldbrook Avenue for a report of criminal mischief On January 5th. The victim reported that someone had broken the driver’s side window to her 2013 Jeep Wrangler sometime between 2 p.m. Jan. 4 and 10 a.m. Jan. 5.

There was nothing taken from the vehicle. Anyone with information is asked to submit a tip or contact the Chambersburg Police Department.

THEFT – Pennsylvania State Police in Chambersburg are investigating the theft of $7 in cash and a Patriot Federal Credit Union credit card from a 2004 Hyundai Santa Fe belonging to a Shippensburg woman, 50, while it was parked on Grand Point Road Sunday.

AUTO ACCIDENT – There were no injuries reported in a two-car crash on Mason Dixon Road in Antrim Township at 6:49 a.m. Friday, according to PSP, Chambersburg.

Police said Alexis C. Jack, 23, Williamsport, Md., was west-bound on Mason Dixon weren’t she made a left-hand turn into the path of an east-bound car driven by Gabriel E. Hollingsworth, 46, of Clearsprings, Md. A one-year-old child was in a rear-facing car seat in Jack’s car.

Both vehicles were towed from the scene.