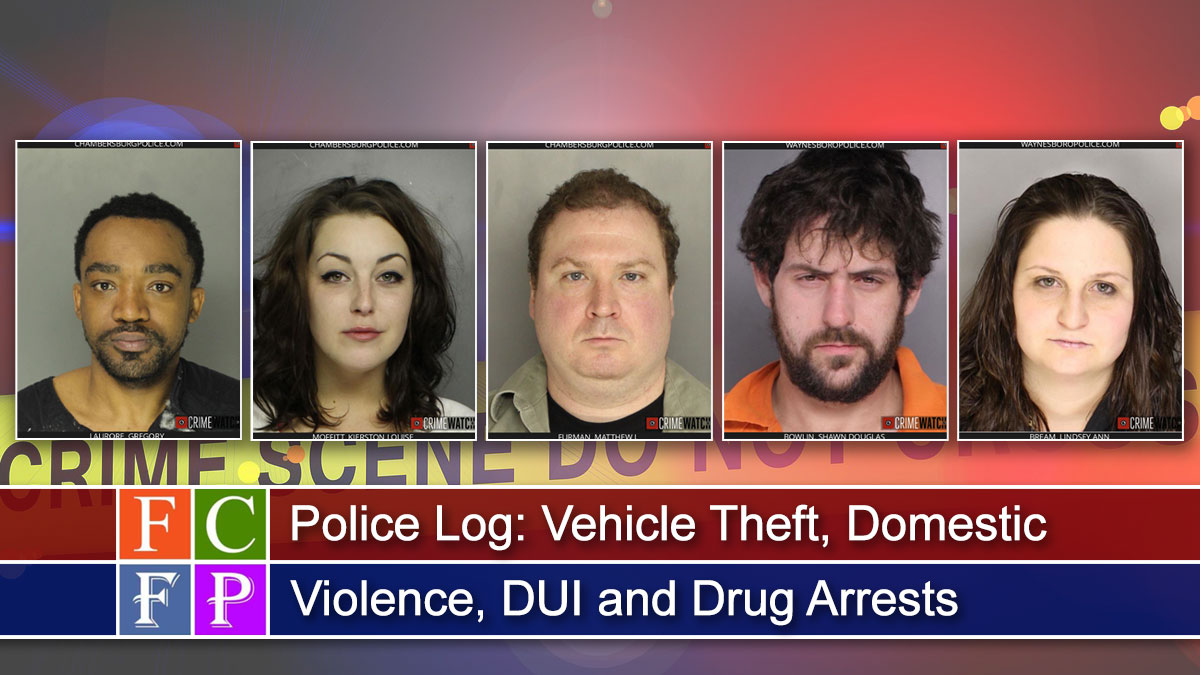 Local police have been kept busy investigating thefts, drunken customers and a variety of other incidents recently.

CRIMINAL WARRANT – Chambersburg police obtained an arrest warrant for Gregory Laurore, 37, Chambersburg, who is accused of tasking a vehicle without the owners’ permission on Nov. 30. He still has not returned the vehicle, police said.

Laurore is now wanted for unauthorized use of a motor vehicle.

He is described as a black male, 5’7” tall, weighing 160 pounds with brown eyes and black hair.

Moffitt was found to be operating the vehicle without an ignition interlock as required by Penn Dot.

A Criminal Complaint was filed charging Moffitt with Illegally Operating a Vehicle Without Ignition Interlock.

ARREST – Chambersburg Police responded to Starbucks at 913 Norland Avenue, on Jan. 16 to assist EMS with an unconscious subject.

Police arrived on the scene and found Matthew Furman, 42, lying on the floor in the cafe.  Furman was found to be highly intoxicated.

He was transported by EMS to Chambersburg Hospital due to his level of intoxication.  A citation was filed charging Furman with Public Drunkenness.

ARREST – Shawn D. Bowlin, 26, Waynesboro, has been charged with one count each of intimidation of a victim, terroristic threats, simple assault, and harassment.

The charges are the result of a domestic assault incident reported at 8:29 a,m, on January 8.

ARREST – Charles E. Rickard, 47, Waynesboro, has been charged with two counts of driving under the influence of alcohol and/or a controlled substance after police received a report of an intoxicated subject on January 3 at 2:34 a.m. on South Potomac Street.

ARREST – Lindsey A. Bream, 25, Hanover, has been charged with one count each of possession of a small amount of marijuana and possession of drug paraphernalia.

The charges stem from an investigation of an incident that took place at 12:19 p.m. on Tritle Avenue.