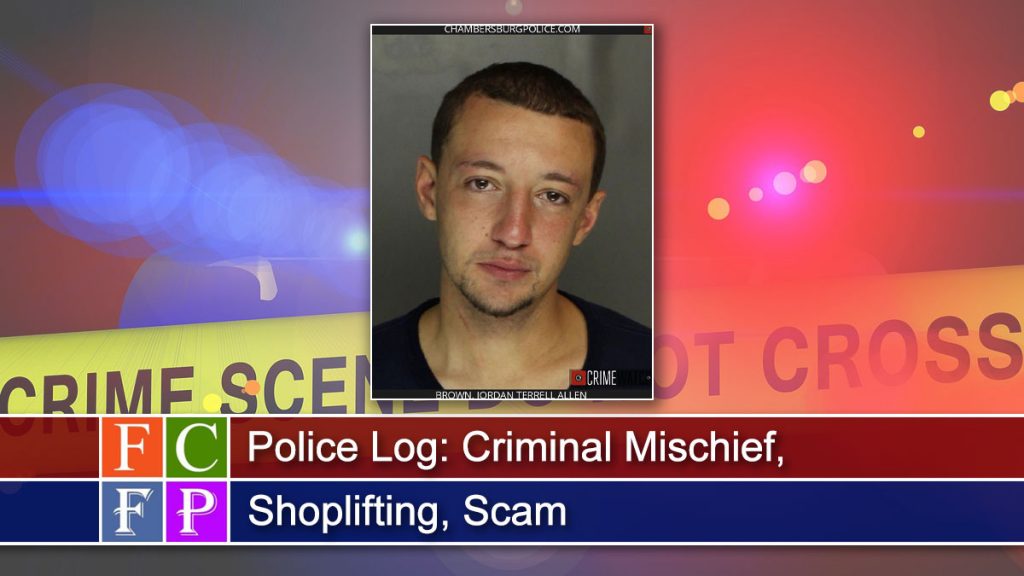 Area police investigated a variety of crimes recently, from criminal mischief to retail theft to scams.

On 01/10/20 at approximately 1840 hrs, Jordan Brown, 26, got into a verbal altercation with the resident of 226 Lincoln Way West.  As a result of this argument, Brown became upset and threw a metal chair into the rear window of the victim’s 2006 Nissan, breaking it.

A Chambersburg man and a juvenile were arrested Sunday On shoplifting charges, according to Pennsylvania State Police. Police arrested Leonard Baker, 62, and a 16-year-old girl after they allegedly took about $80 worth of merchandise from Walmart in Guilford Township and left the store without paying for it.

A Chambersburg man escaped injury when he lost control of his car at 12:23 a.m. Sunday on Sycamore Grove Road in Greene Township and it overturned.

Police said Hunter C. Paquette, 20, was southbound on Sycamore Grove when he lost control of his Honda as he approached a right-hand curve about 100 yards from Mickey’s Inn Road.

The car went off the west side of Sycamore Grove and hit a mailbox. It then hit an embankment on the west side of the road, overturned and landed on its roof facing east. It came to rest in the southbound lane.

Paquette was uninsured. The car had to be towed.

A 32-year-old Shippensburg man was taken into custody early in the morning Jan. 14 by PSP after he entered a Southampton Township home and fell asleep.

Police were called to the home on Orrstown Road at 12:55 a.m. after the home’s residents heard a noise and thought a burglary was in progress.

When police arrived, they found the heavily intoxicated man asleep on a recliner in the living room. Police said the man had urinated on himself while in the recliner.

A 70-year-old Quincy Township man was scammed out of $6,500 in Walmart and Best Buy gift cards Sunday, according to PSP.

Police said scammers convinced the man to buy the gift cards to pay for fixing his computer. He then provided numbers from the cards to the scammers.