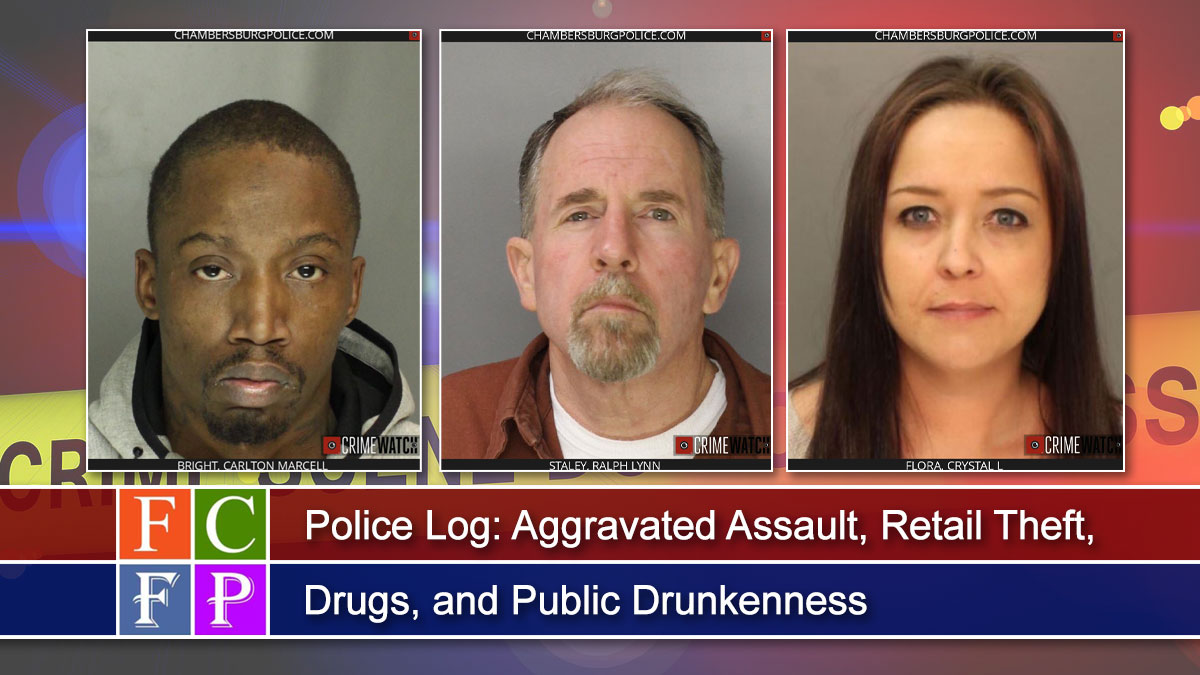 Area police investigated a number of summary and misdemeanor crimes recently. Some of the crimes include Aggravated Assault, Retail Theft, Drug Possession, Public Drunkenness. The Chambersburg Police are seeking information about a set of Missing Keys.

AGGRAVATED ASSAULT: Carlton Marcell Bright is wanted by the Chambersburg police for the listed charges after a domestic violence incident.

Anyone with information on the location of Bright is asked to contact the Chambersburg Police Department at (717) 264-4131.

PUBLIC DRUNKENNESS: Ralph Staley was arrested for Public Drunkenness on Nov. 24.  Staley was found laying on the ground to the rear of a residence in Chambersburg.  Several citizens found Staley and called for ambulance and police due to his intoxicated demeanor.

Staley was found to be under the influence of alcohol to a degree that he endangered himself.  He was taken to Franklin County Jail to await arraignment before a judge.

He pleaded guilty to a summary public drunkenness charged and made arrangements to pay a fine, according to online court records.

RETAIL THEFT: The Chambersburg Police Department was dispatched to Sheetz 1 Monticello Court Oct. 23 for a report of retail theft. A female was observed concealing merchandise and then leaving the store without paying for the item.

The female was identified at a later date as Crystal Flora, 39, and charges were filed through Magisterial District Judge Glenn Manns Office on Nov. 21 on a misdemeanor theft charge.

A preliminary hearing is set for January 7 in the case.

LOST KEYS: A set of keys were lost on Nov. 7 at Results Fitness, 1600 Orchard Dr. The key chain had a rubber pig logo, three house-style keys, and one vehicle key/fob.

The missing keys are nearly identical to the set of keys pictured. If you believe you have found these keys, or have information as to who may have them, please contact the Chambersburg Police Department at (717) 264-4131

DRUG POSSESSION: Morgan E. Gastley, 34, Hagerstown, has been charged with one count each of possession of a small amount of marijuana and restriction on alcoholic beverages after police made contact with several subjects at 9:55 p.m. on November 11 on South Broad Street at Memorial Park Drive.

Mohammad is charged with one count of retail theft in connection with a July 12 shoplifting incident at a business on East Main Street.

DRUG POSSESSION: Ali A.M. Billings, 41, Hagerstown, was charged with one count each of possession of a small amount of marijuana and restriction on alcoholic beverages after contact was made with several subjects Nov. 11 at 9:55 p.m. on South Broad Street at Memorial Park Drive.

Drink and Drive? DUI Task Force Will Be Watching