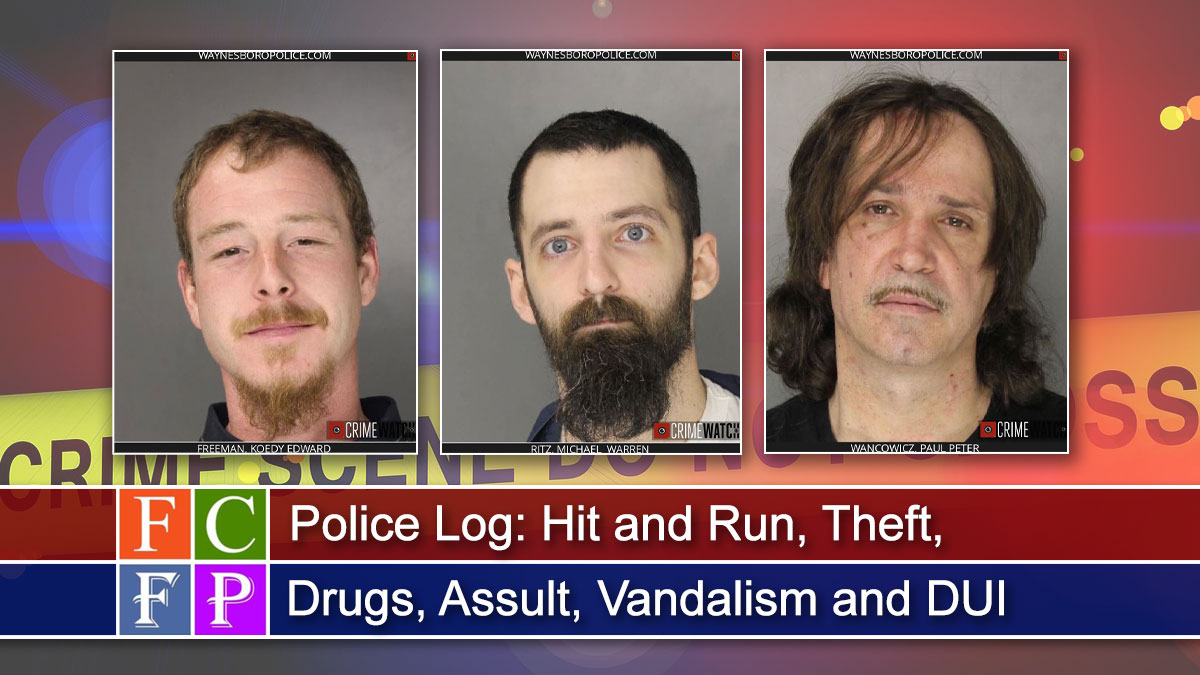 THEFT: Chambersburg police are investigating the theft from a motor vehicle That happened Dec. 14. The suspect broke the passenger side window of the victim’s vehicle and took a brown purse.

The purse contained a blue and white wallet containing multiple cards and cash. The theft happened between 8:30 and 9:45 a.m.

HIT AND RUN: Chambersburg Police Department took a report of an accident involving damage to an unattended vehicle in the 500 block of Broad Street Dec. 14. The striking vehicle hit a legally parked vehicle and damaged the driver’s side mirror.

If anyone has information relating to this incident you can contact the police at (717) 264-4131.

RETAIL THEFT: Chambersburg Police responded to Target at 930 Norland Avenue Dec. 5 for retail theft in progress.  Officers arrived on the scene and took a 13-year-old boy into custody as he was leaving the store.

After talking with the store’s Loss Prevention, police determined that the juvenile had been in the store on Dec. 4 and taken additional items.  The juvenile took a total of $213.94 worth of merchandise from the store without paying for it.  Retail theft charges were filed and the boy was released to his family.

VANDALISM: Someone broke a plastic spotlight in the ground at a Chambersburg residence sometime between about 8:30 p.m. Dec. 9 and 10 a.m. Dec. 10. Police did not provide a physical address.

The light, valued at $20, was about 2 feet from the edge of the sidewalk and appeared as though someone had stepped on it breaking it.

Anyone with information regarding this damaged property can contact the Chambersburg Police Department at (717) 264-4131.

CURFEW VIOLATION: Chambersburg police cited two juvenile boys with curfew violations Saturday after finding then out in the area of South Franklin Street at 2:55 a.m.

The boys were given summary curfew citations to the boys, who were then returned to their respective residences and released to their parents.

Charges are a result of a domestic violence incident reported Dec. 2 at 8:29 p.m. on West Main Street in Waynesboro.

DUI: Michael W. Ritz, 30, Waynesboro, was charged with two counts of driving under the influence of alcohol and/or a controlled substance and one count of disorderly conduct along with multiple traffic offenses.

DUI: Paul P. Wancowicz, 49, Waynesboro, faces charges of driving under the influence of alcohol and/or a controlled substance and going the wrong way on a one-way road

The incident occurred at 12:21 a.m. Nov. 23 on West Second Street in Waynesboro.

DRUG POSSESSION: Courtney M. Dotsen,19, Hagerstown, was charged with one count of possession of a small amount of marijuana after police made contact with her on November 22 at 11:05 p.m. on South Potomac Street.

DRUG POSSESSION: Waynesboro police charged Norman L. Jacobs, 20, Hagerstown, with one count of possession of a small amount of marijuana after police made contact with him on November 22 at 11:05 p.m. on South Potomac Street.

VANDALISM: The Shippensburg Police Department is asking for the public’s help in locating a man believed to have vandalized a local business last month.

Police said they are looking for a white male with short black hair, wearing a navy blue tracksuit with white stripes on the sleeves and a gray hoodie underneath.

The man pulled a large wooden sign at the Raspberry Jam out of the ground on Saturday, Nov. 2.

Anyone with information about the crime or the identity or whereabouts of the suspect is asked to call the Shippensburg Police Department at (717) 532-7361. Callers can remain anonymous.

Police found used hypodermic needles and empty baggies used for packaging heroin during a search of the vehicle. Gross was taken into custody and processed at Cumberland County Prison on charges of possession of drug paraphernalia.

November 14, 2019
Thanks for subscribing! Please check your email for further instructions.