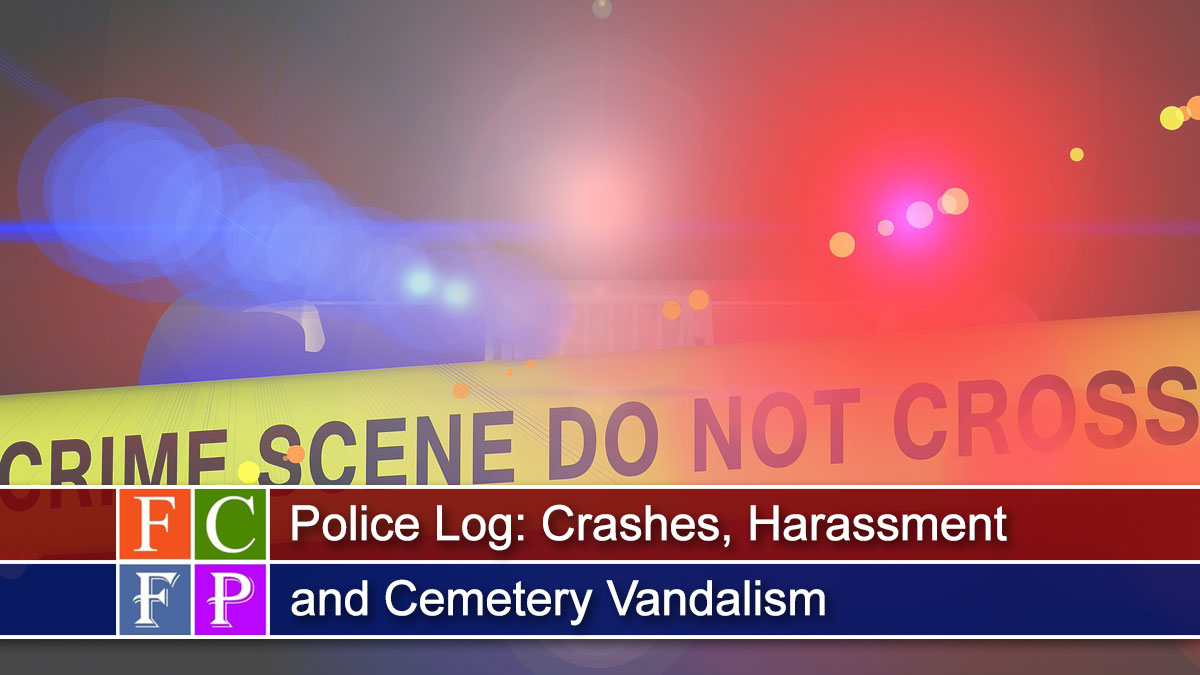 Police are looking for a gold-colored Chevrolet truck with off-road lamps on its front grill in connection with the vandalism of a Quincy Township cemetery and some nearby residents early Friday morning.

The truck was seen in the area around the time the vandalism is believed to have happened, according to police.

Police responded to a report of vandalism at south Mountain and Loop Roads at 4:20 a.m. Friday. A large number of tombstones were vandalized as well as light posts and nearby residential fences, police said.

Police ask anyone with information to contact PSP Chambersburg at 717-264-5161.

a Chambersburg man who hit a car in a driveway in Hamilton Township Jan. 22 was cited by PSP for not staying on the roadway.

Cashdollar was uninjured. Treat was treated at the scene for minor injuries by emergency medical personnel.

A Hancock Maryland man suffered injuries in a two-vehicle crash at 7:13 a.m. Friday in the intersection of Lincoln Way East and Third Street in McConnellsburg, police said.

Raymond O’Rourke, 49, was taken to Fulton Medical Center for treatment of minor injuries following the crash.

Dylan Payne, 18, of Hancock, Maryland, had suspected minor injuries after he failed to negotiate a curve on TimberRidge Road in Thompson Township 1:37 p.m. Thursday.

A passenger in his Jeep Cherokee, William Dailey, Hancocjk, also had minor injuries. Both refused transport to a medical facility.

Police said Payne was southbound on Tiber Ridge Road when he failed to negotiate a turn in the road and the Jeep went off the road and hit a tree with the passenger side of the vehicle.

The Jeep continued south parallel with the road for about 30 yards before coming to rest along the west side of the road.

Charges were filed against an 11year-old boy who bit a 42-year-old woman during an incident at Central Fulton High School in Ayr Township Jan. 16. Police said the boy was “acting out” at the time.

According to a police report, Clopper crashed his vehicle along Mill Hill Road at 8:24 p.m. Wednesday, then fled the scene. He was later located at his residence.

After taking him in custody, Police charged him with driving under the influence of alcohol, attempting to disarm a law enforcement officer, obstructing the administration of law, resisting arrest and five summary offenses.

He is in Franklin County Jail, unable to post bail, according to online court records.

John R.. Bumbaugh, IV, Waynesboro, was cited for harassment as the result of an incident Nov. 18 at 11 p.m. on West Third Street.

Brandon C. Bowermaster, Orrstown, was cited for harassment as the result of an incident Dec. 15 at 4:39 p.m. on South Potomac Street.

Shawn A. Nolan, Waynesboro, was cited for criminal trespass as the result of an incident Jan. 2 at 4:43 p.m. on Hawbaker Avenue.

Florida Woman Accused of Being Part of Multi-State Criminal Organization