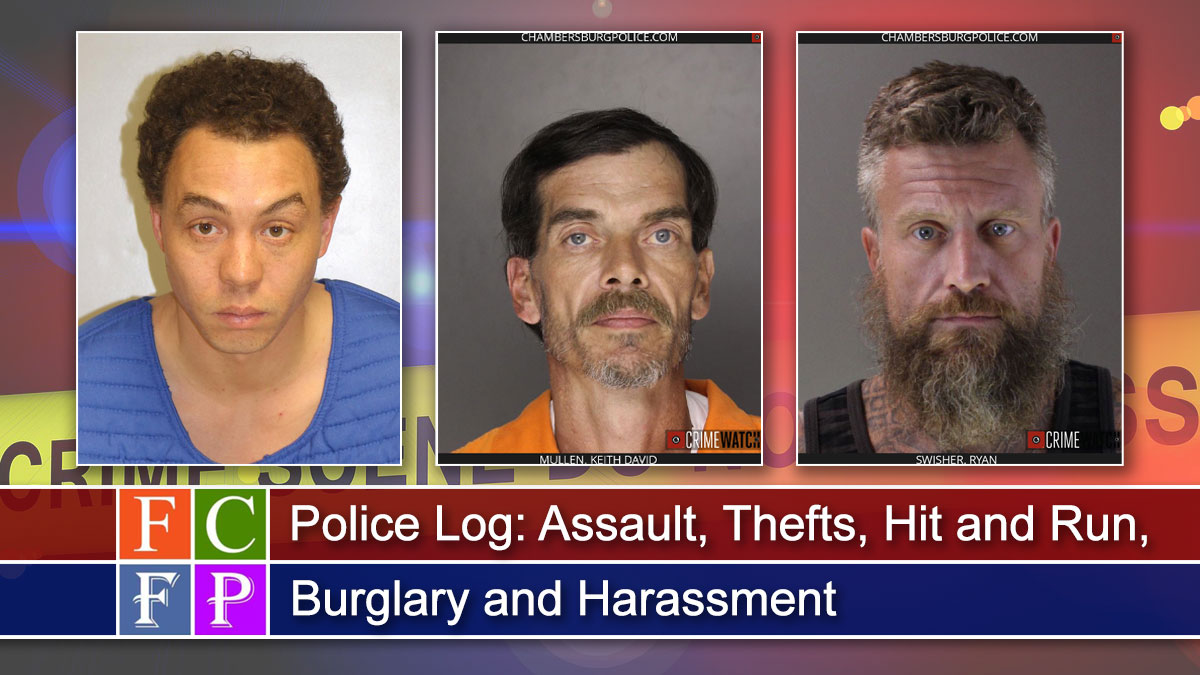 Chambersburg police were kept busy the past week investigating assaults, thefts, hit and run crashes, burglaries and a number of other crimes.

ASSAULT: A Shippensburg man accused of punching a Chambersburg Hospital security guard in the face Monday night in the hospital’s emergency room is in Franklin County Prison denied bail on assault charges.

Police were called to the hospital at 5:45 p.m. for a report of an assault in the emergency room, according to court records. When an officer arrived, Stine had been subdued by the security guard, but not before he punched the guard in the face, according to an affidavit filed with court papers.

Multiple nurses and other security personnel were also with Stine when police arrived, according to the report. Police were told Stine had voluntarily asked to be taken to the hospital and had been there for about five hours when he caused a disturbance.

The guard, who was watching Stine at the time as part of his job duties, told police Stine got up and began walking around. When he was asked to sit back down on the bed, he became angry and told the guard he didn’t like the way he was looking at him.

At that point, he punched the guard in the jaw before being restrained.

Stine was arraigned on the charges by Magisterial District Judge Glenn Manns, who denied him bail, citing “No means to assure the safety of the public or the defendant” as the reason for the denial.

THEFT: Keith David Mullen, 45, Chambersburg, faces multiple theft charges stemming from four separate incidents around Chambersburg. He is charged with stealing $5,607 worth of fencing and treated lumber from job sites on Gateway Avenue, and catalytic converters from vehicles at Memorial Park, a business on Norland Avenue and a residence on Ramsey Avenue.

Stine is charged with:

Chambersburg police area also investigating additional thefts in which Mullen is a suspect.

BURGLARY: Chambersburg police are investigating a burglary that happened sometime between 5 and 6:45 p.m. Wednesday in the 300 block of Lincoln Way West.

RETAIL THEFT: Frederick County, Md., sheriff’s officers apprehended a Winchester, Va., man wanted in Franklin County on retail theft charges last week. Ryan Swisher, 40, was taken into custody by the Frederick County Md. Sheriffs office Jan. 11.  In charging documents, Chambersburg police said Swisher entered Kohl’s department store on Norland Avenue and removed clothing from the shelves. He then took the items to customer service and returned them as though he actually purchased the items. He is charged with three misdemeanor counts of retail theft.

Swisher was brought back to Franklin County Wednesday for prosecution. During his initial arraignment Wednesday, Magisterial District Judge Glenn Manns set his bail at $25,000. He is currently in Franklin County Jail, unable to post bail.

His preliminary hearing on the charges is set for Feb. 25 in Franklin County Central Court.

DUI, ESCAPE: A Chambersburg man who fled from police during a traffic stop at 1:30 a.m. last week faces charges of driving under the influence of alcohol and escape, as well as traffic citations. Police said they observed Douglas Simmons Jr., 35, violating multiple traffic laws while driving a silver BMW in Chambersburg Feb. 9.

Simmons fled from the vehicle when a traffic stop was conducted but was able to be taken into custody by police. Police determined Simmons was under the influence of alcohol to a degree he was incapable of safely operating a motor vehicle. He has been charged with DUI, Escape and traffic violations.

RETAIL THEFT: Chambersburg police charged Mary Alice Miller with retail theft as the result of an incident on Feb. 12 in which Miller allegedly entered Sheetz on Norland Ave and stole a bottle of wine.

FOUND PROPERTY: Chambersburg police took a report of a found bag at 55 South Second St. on Feb. 9. The bag is an over-sized grey and orange Burton bag.

The owner of the bag can retrieve it at the Chambersburg Police Department.

HIT AND RUN: Chambersburg Police responded to a report of a hit and run at 565 Hood St. Monday. The property owner reported that a vehicle struck a wooden post and a metal clothes line pole in the back yard of the residence between the evening of Feb. 14 and the morning of Feb. 15.

If you believe you have information that can assist the police, please contact the Borough of Chambersburg Police Department at (717) 264-4131.

FOUND: A pink Anne Klein clutch purse found in the area of 415 E. Queen St. Monday was turned into the Chambersburg Police Department. Information contained within the purse suggests it possibly belongs to a Cydmarie Febres.

The owner of the property can claim it at the Chambersburg Police Department.

HIT AND RUN: Chambersburg Police responded to 1070 Stouffer Ave, Manor Care on Feb. 13, for a report of a hit and run. Police said a parked vehicle had been struck between 1:45 and 4:30 p.m. that day.

HARASSMENT: On Monday, Feb. 10, an officer spoke with a citizen who was followed to his place of employment by a male operating a black Saturn sedan. The male approached the victim and demanded monetary compensation for being run off the road. The male threatened to contact the victim’s employer after he was not given any money.

The subjects shown in this photo may have information relevant to an ongoing police investigation. He/she is a person of interest, but not necessarily a suspect at this time.

If you believe you have information that can assist the police in identifying or locating these subjects, please contact the Borough of Chambersburg Police Department at 264-4131.

Police Log: Child Abuse, Thefts and a Hit and Run