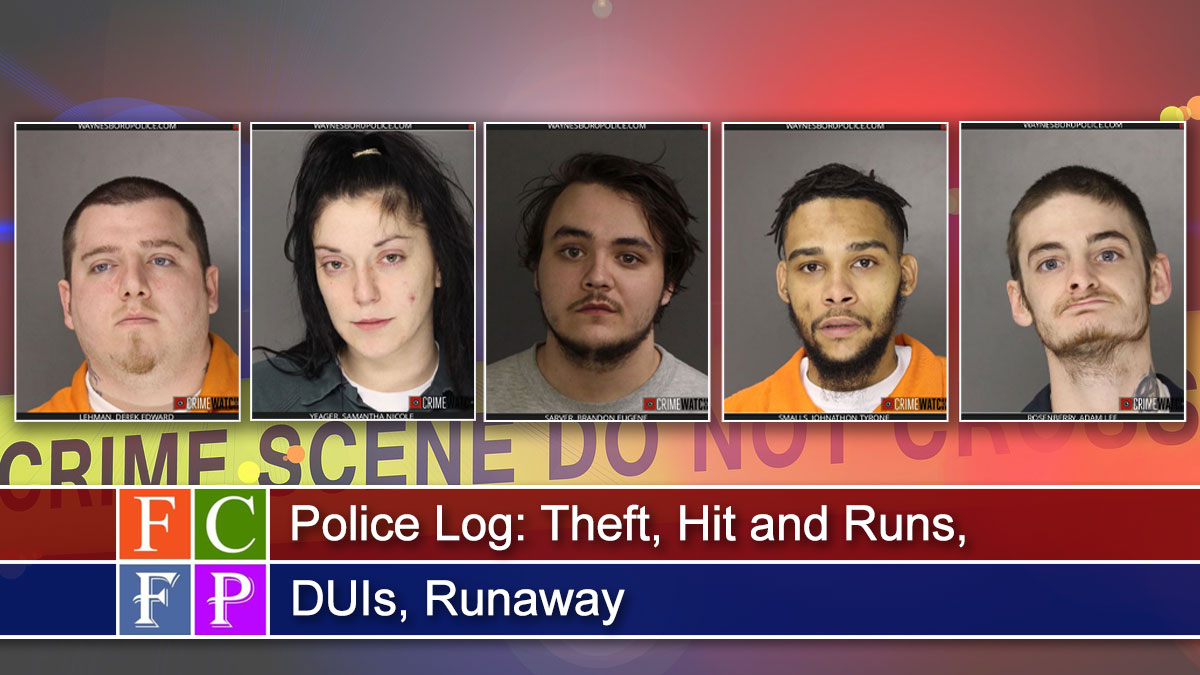 Police are still looking for information about a runaway who disappeared back in October. They have also investigated crimes, made traffic stops and sent a juvenile home following a curfew violation.

THEFT: Chambersburg police responded to the 300 block of East Washington Street Friday for a report of a theft from a motor vehicle. Sometime overnight Thursday, someone stole a wallet from a vehicle. The thief then managed to use it to charge merchandise at multiple businesses in the early morning hours Friday.

The person shown in these photos may have information relevant to an ongoing police investigation.  He is a person of interest, but not necessarily a suspect at this time.

If you believe you have information that can assist the police in identifying or locating this person, please contact the Borough of Chambersburg Police Department at (717) 264-4131.

RUNAWAY: Chambersburg Police are still seeking information regarding a runaway, Corey Bonitto, who left home on October 24, 2019, and hasn’t returned.  Bonitto is approximately 5′ 5″ tall and weighs about 134 pounds.

HIT AND RUN: David H. Dodge, 66, Waynesboro, has been charged with one count each of accidents involving damage to attended vehicle or property and stop signs after a hit and run occurred on February 3 at 11:30 a.m. on S. Potomac Street.

HIT AND RUN: Derek E. Lehman, Waynesboro, 28, has been charged with one count of accidents involving damage to attended vehicle or property.

ASSAULT: Samantha N. Yeager, 26, no fixed address, has been charged with two counts of aggravated assault and one count each of disorderly conduct and public drunkenness.

Police made contact with her on February 13 at 5:14 a.m. on South Potomac Street.

DRUGS: Brandon E. Sarver, 21, Hagerstown, has been charged with one count each of possession of a small amount of marijuana and possession of drug paraphernalia.

Police made the arrest after an incident occurred on February 7 at 2:23 a.m. on W. Second Street.

Police arrested Smalls after a search warrant was executed on February 3 at 12:10 p.m. on Green Street.

DUI: Robert S. Meyer, 46, Waynesboro, has been charged with two counts of driving under the influence of alcohol and/or a controlled substance and one count of operation following suspension of registration after a traffic stop was conducted on January 23 at 12:01 a.m. on South Potomac Street.

VEHICLE VIOLATION: Adam L. Rosenberry, 26, Waynesboro, has been charged with one count each of unauthorized use of a motor vehicle and driving while operating privilege is suspended or revoked

DUI: Robert S. Meyer, 48, Waynesboro, has been charged with two counts of driving under the influence of alcohol and/or a controlled substance and one count of operation following the suspension of registration after a traffic stop was conducted on January 23 at 12:01 a.m. on South Potomac Street.

PUBLIC DRUNKENNESS: Ryan C. Staley, Waynesboro, has been cited for public drunkenness after a pedestrian accident occurred on January 31 at 10:24 p.m. on Clayton Avenue.

FLEEING, ELUDING POLICE: A 17-year-old male has been charged with one count each of fleeing/attempting to elude police, recklessly endangering another person, driving vehicle at safe speed, turning movements and requirements and curfew.

CURFEW VIOLATION: A 16-year-old male has been cited for the borough’s curfew ordinance after a traffic stop was conducted on February 8 at 1:23 a.m. on West Main Street.

Murder Trial Begins Tomorrow for Man Accused in 2014 Killing on...