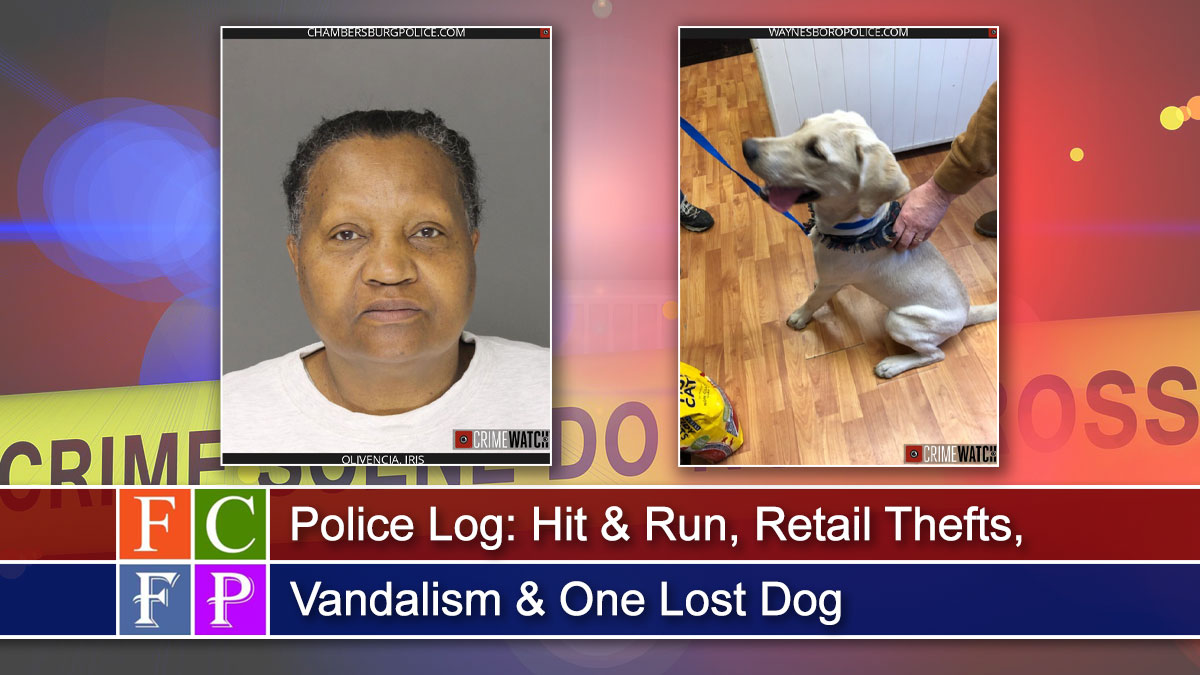 Chambersburg police are investigating a variety of crimes, while in Waynesboro, police were called Saturday afternoon toke a dog roaming a West Eighth Street neighborhood into custody.

HIT AND RUN: An 83-year-old Maryland man has been charged with hitting a street sign in Chambersburg and leaving the scene of the crash without notifying police.

He is charged with causing an accident involving damage to unattended property.

Christopher Brant, 43, of Frederick, Md., was identified by police during an investigation into the crime as the individual that took the candy Feb. 18 without paying for it. He has been charged with summary retail theft.

FELONY RETAIL THEFT: A Shippensburg woman faces a felony charge in a retail theft case in which she is accused of taking 25 items from the Wayne Avenue Dollar Tree store Feb.18 without paying for them.

She is free on $25,000 unsecured bail while awaiting a March 3 preliminary hearing in the case.

Police said the decision to charge Olivencia with a felony was based on multiple prior retail theft convictions.

THEFT: Chambersburg police are investigating the theft of a set of Apple AirPods at the Chambersburg YMCA Jan. 25. The owner of the AirPods told police someone took the device while they were with his property in the facility’s gym.

Anyone with information regarding the theft is asked to contact the Chambersburg Police Department.

VANDALISM: Chambersburg police took two separate vandalism reports this month, and ask for tips from the public to help solve the cases.

Police said vandals damaged siding on a house on East Garfield Street with BB’s in late January. The crime was reported Feb. 9.

Vandals damaged a window in the front of a house the 1600 block of Clinton Avenue sometime after 11 p.m. Feb. 16.

FOUND DOG: The Waynesboro Police Department was called for a loose dog Saturday afternoon. A male, yellow lab was found in the 400 block of West Eighth Street.

The dog has been taken to the Antietam Humane Society.

DOMESTIC ASSAULT: Pennsylvania State Police, Chambersburg, arrested David Kelly, 51, Chambersburg, Saturday and charged him with simple assault and harassment in connection with an incident that happened early that morning in Guilford Township.

Police said Kelly punched a 40-year-old woman in the face multiple times and shoved their 9-year-old daughter against a wall during an argument that morning.

He allegedly became angry while the woman was talking on the phone with an ex-boyfriend, threatened to leave and have the cable to the residence shut off. When he tried to take back Valentine’s gifts he had given the woman, she tried to stop him, police said. She told police he threw her to the ground and began punching her in the face.

When their daughter tried to pull him off her mother, he allegedly shoved the child against a wall.

Kelly was arraigned before on-call Magisterial District Judge Jody Eyer, who set his bail at $50,000. According to online court records, he was in jail Sunday night, unable to post bail. His preliminary hearing takes place March 3 in Franklin County Central Court.

Linda Osborn - April 7, 2020 0
Take a look back at Franklin County’s history through news and photos that appeared in local newspapers 25, 50, and 100 years ago on April 7th.