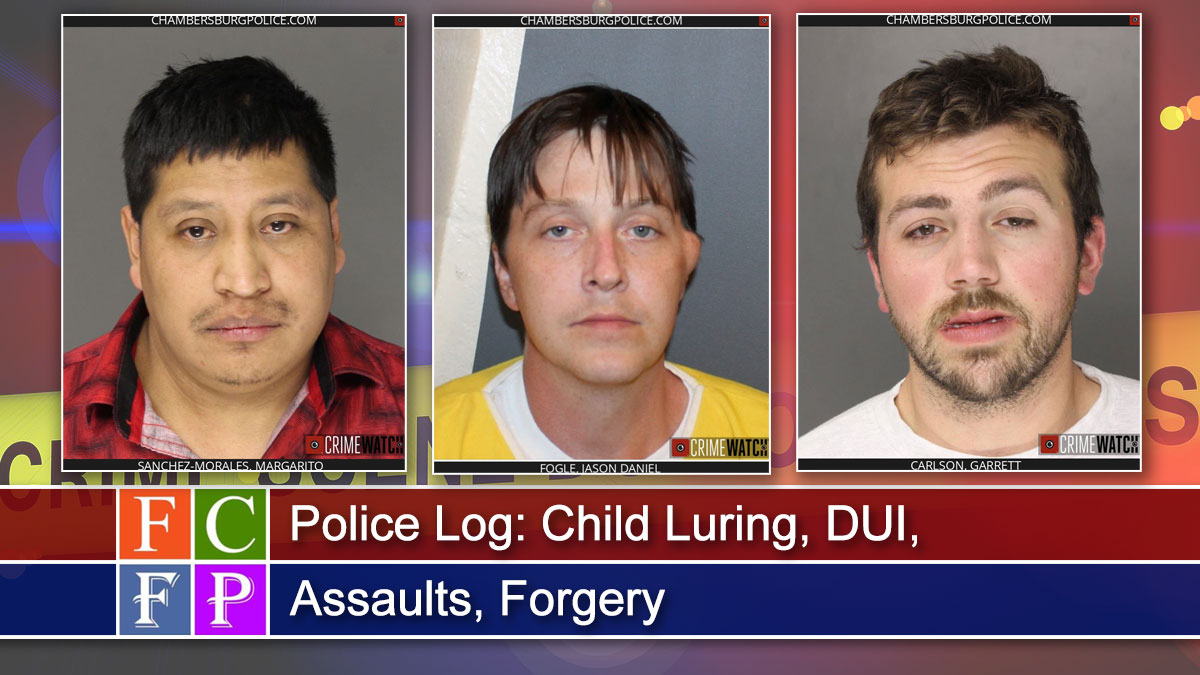 ATTEMPTED CHILD LURING: Carlisle Police are investigating a report that a man tried to lure children into his vehicle Sunday evening.

Police said the incident happened at around 6:45 p.m. in the parking lot of the Carlisle Post Office. The man approached several juveniles and tried to get one of them to get into his vehicle by asking for assistance and offering the child money.

The juveniles were able to run away and report the incident to their parents, who notified police.

DOMESTIC ASSAULT: On 02/16/2020 CPD officers were dispatched to the 100 block of E. Catherine Street for an active domestic assault.

Once on scene, officers located the victim who showed signs of being physically assaulted. The suspect, who had been described as a Hispanic male wearing a red shirt and gray sweatpants, was found in close proximity to the crime scene hiding in a back yard.

He was identified as Margarito Sanchez-Morales, 35, Chambersburg, and taken into custody. He was then transported to FCJ to await arraignment.

ASSAULT: Chambersburg police are investigating a report that a 16-year-old boy was assaulted by four males while at an address in the 500 block of South 2nd Street Feb. 15 at 3:50 p.m.

Bolivar Rodriguez, 19, was identified as one of the assailants. The other three have not been identified.  Rodriguez was charged with one count of Harassment.

Anyone with information regarding this incident contact the Chambersburg Police Dept. at 717-264-4131.

DUI: On Feb. 23 Chambersburg Police conducted a traffic stop on a vehicle that had failed to stop for a stop sign.  Lisa Barnhart, 49, was operating the vehicle.  Barnhart was found to be under the influence of alcohol and arrested for DUI.

FORGERY: Jason Daniel Fogle, 35, is wanted for forgery after he allegedly attempted to cash a check that was taken from a local business.

Anyone with information on Fogle’s whereabouts is asked to contact the Chambersburg Police Dept.

DUI CRASH: On Monday at 2:32 a.m., Chambersburg police were dispatched to a single vehicle accident in the 1500 block of Edgar Ave.

Units arrived to find Garrett Carlson, 22, passed out in the driver’s seat of his vehicle. Carlson had struck a parked vehicle, causing disabling damage to his vehicle, and came to rest in a nearby yard. Carlson was found to be under the influence of an alcoholic beverage and was subsequently arrested for DUI.