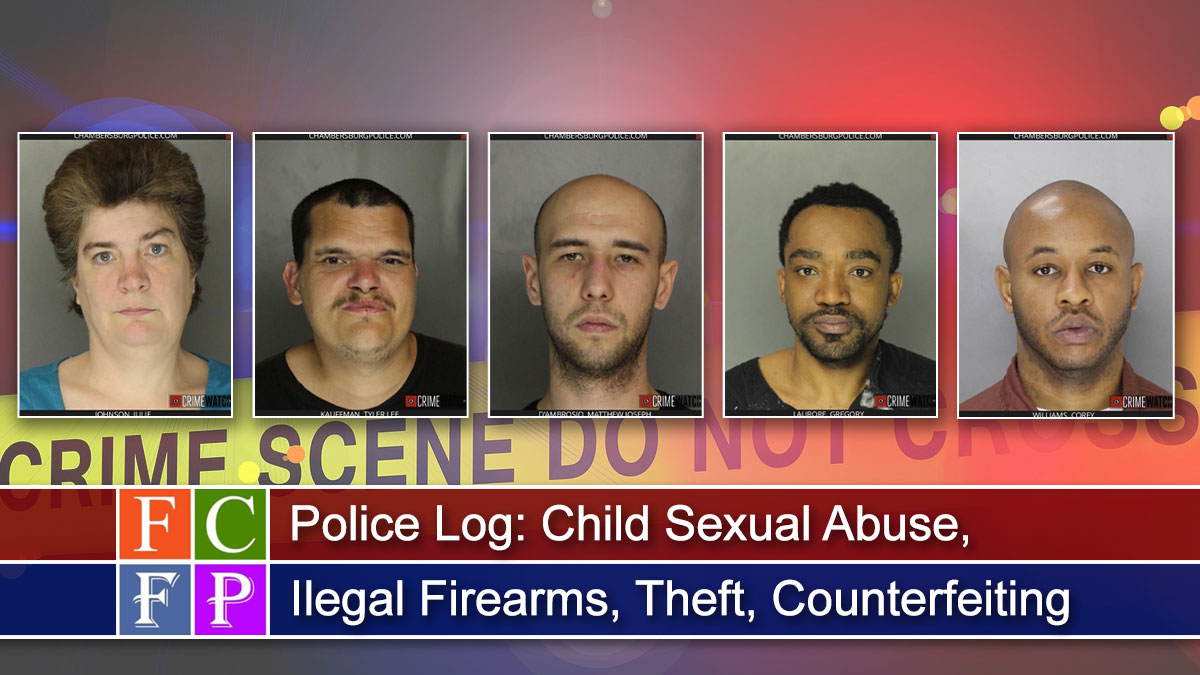 Area police investigated and arrested two people accused of sex crimes against a child this week and apparently thwarted an armed robbery at a local bar well before it could happen. They also warned local businesses about counterfeiters passing fake currency in the local area.

Julie Johnson, 51, and Tyler Kauffman, 35, both of Chambersburg, are in Franklin County Jail today, charged with Sexual Abuse of Children (Child Pornography), Felony Unlawful Contact With Minor, and Corruption of Minors resulting from a Chambersburg Police Department investigation involving an 8-year-old boy.

Magisterial District Judge Glenn Manns set their bail at $100,000 each during a preliminary arraignment Friday. Their preliminary hearing on the charges takes place Tuesday in Franklin County Central Court.

Chambersburg Police are looking for Matthew J. D’Ambroiso, 26, Chambersburg, on firearms charges. Police received information Friday from the Pennsylvania State Police‘s Chambersburg Barracks that D’Ambrosio was in possession of a sawed-off shotgun.

It was reported that D’Ambrosio was planning to execute an armed robbery at a local bar in the Chambersburg Borough with the altered weapon.

A search was conducted of D’Ambrosio’s residence and CPD officers located the altered weapon.  D’Ambrosio is currently wanted by CPD for (1) count Prohibited Offensive Weapons (M1).

A man accused of stealing a car in Chambersburg last November is in custody in Virginia today.

Chambersburg Police were notified Friday that Gregory Laurore, 37, Chambersburg, was in custody in Frederick County, Virginia.

He is wanted on a warrant on a charge of unauthorized use of a vehicle. Police said Laurore took the victim’s vehicle without her permission on November 30.

Corey Williams was taken into custody Wednesday by the Washington County Sheriffs’ office in Hagerstown, Md. on an active arrest warrant.

He is charged with Strangulation, Terroristic Threats and Simple Assault in connection with an incident on Dec. 18 in Chambersburg.

Chambersburg police are warning local businesses that counterfeiters are at work in the area, passing Faye currency. A criminal passed a fake $50 bill at a business on Bedington Avenue sometime last weekend.

The pictured fraudulent $50 bill was passed to the business at some point over the previous weekend.  CPD would like to make businesses aware that these bills are being passed around, and to report any incident in which one is received.

The people shown in these photos may have information relevant to an ongoing police investigation.  They are a person of interest, but not necessarily a suspect at this time.

If you believe you have information that can assist the police in identifying or locating these people, please contact the Borough of Chambersburg Police Department at (717) 264-4131