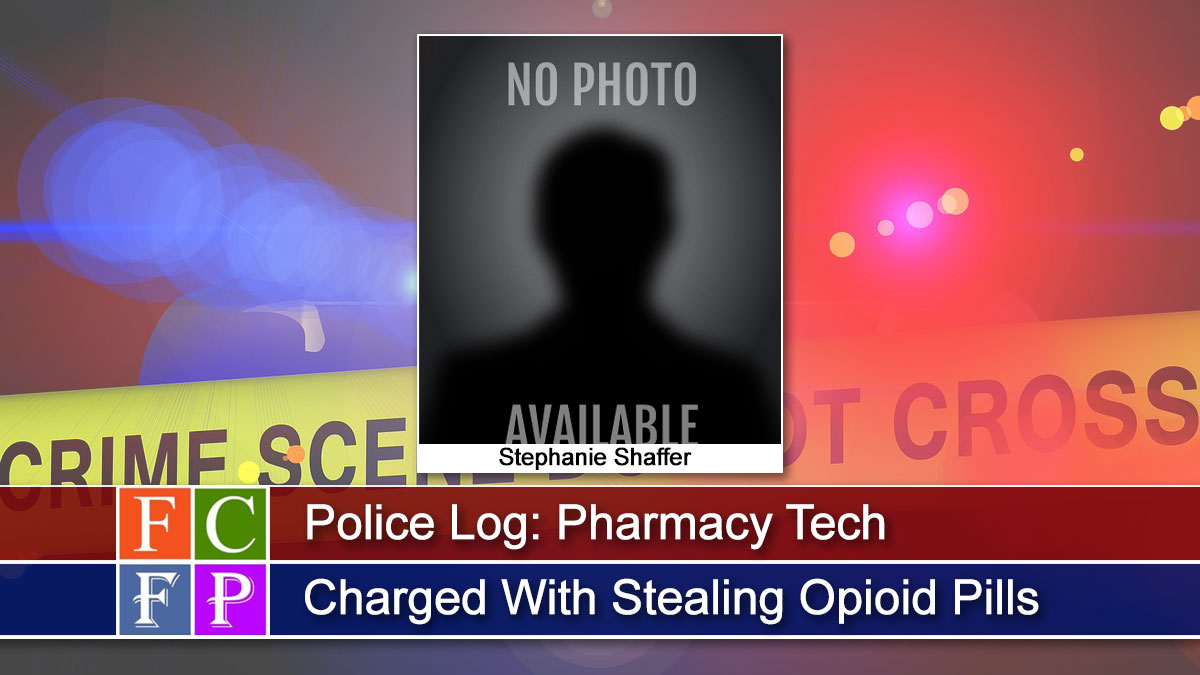 FRANKLIN COUNTY (Sept. 10, 2019) — A Waynesboro woman faces almost 100 different charges, most of them felonies, in connection with the theft of opioid pills police said she stole from her employer, a Waynesboro pharmacy.

Stephanie Shaffer, 38, was taken into custody by members of the Waynesboro Police Department, Franklin County Drug Task Force, DEA Diversion Unit and the Pennsylvania Office of the Attorney General at 6:45 a.m. today at her West 10th Street residence.

Police obtained a warrant for her arrest Monday following a Months-long investigation that began in May.

According to a WPD news release, that was when Shaffer was first suspected of stealing Schedule II opioid narcotics from a local pharmacy where she was employed as a pharmacy technician.

From Other Police Reports:

STOLEN BICYCLE: Sometime between approximately 3:30 p.m. Aug 23 and 3 p.m. Aug. 24, a bicycle was taken from the 200 block of South Main Street in Chambersburg.

The bicycle is described as a blue three-wheeled bike with a basket on the back.

Anyone with information about this theft or knows where the bicycle could be located is asked to contact the Chambersburg Police Department at (717) 264-4131.

HIT AND RUN: Sometime between Friday 5 p.m. Sept. 6 and 1 p.m. Sept. 9, a vehicle hit a parking meter pole in the the first block of North 3rd Street in Chambersburg.

Anyone with information on the vehicle or its driver or owner is asked to contact the Chambersburg Police Dept at (717) 264-4131.

BICYCLIST CITED: At around 2 a.m. Monday, Sept. 9, a Shippensburg police officer observed 23-year-old Joseph Kennedy Jr. of Roxbury Road operating a bicycle haphazardly in the middle of the lane in the first block of West King.

The bicycle did not have front or rear lights and Kennedy appeared to be under the influence, but just under the legal limit to be cited for Driving Under the Influence of alcohol.

He was warned to walk the bicycle on the sidewalk.  A short time later he was observed on traffic cameras again haphazardly riding the bicycle north in the south lane of North Earl Street between Burd and Fort.

Since reasonable warnings didn’t suffice, citations were filed charging Kennedy with Pedestrian under the influence to be on sidewalks, for not having lamps as required and for not operating his pedalcycle on right side of the road.

FOUND DOG: On Sunday, September 8, the Waynesboro Police Department was called for a found dog. The dog was found at Memorial Park. Officers were unable to locate the dog’s owner.

If you recognize the dog or know who the owner is please have them contact the Antietam Humane Society (8513 Lyons Rd, Waynesboro, PA 17268), that is where the dog was transported.