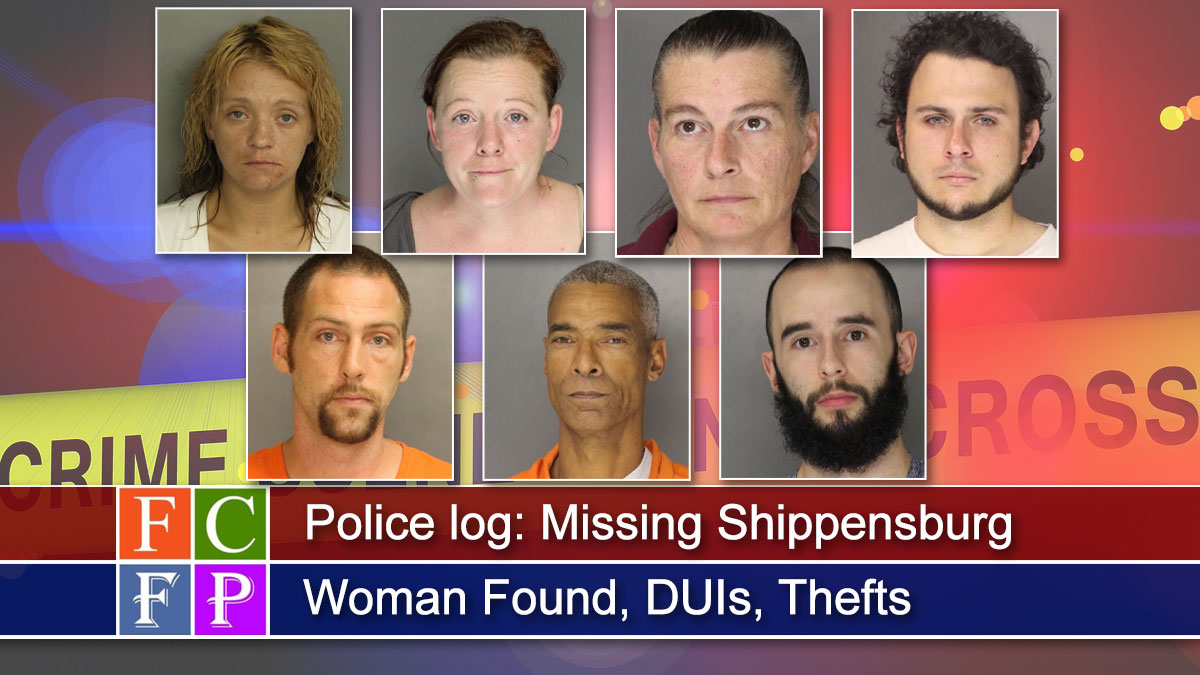 FRANKLIN COUNTY (Sept. 17, 2019) — Shippensburg Police have announced that Heather Keppley has been found after a week of searching for her. Other local police departments have reported a variety of crimes throughout Franklin County.

FOUND: (Sept. 17, 2019) — A Shippensburg woman missing since Sept. 9 has been found, according to Shippensburg Police.

Heather Keppley, 37, was last seen in Shippensburg in the afternoon of Sept. 9. Police gave no details about the circumstances of her disappearance or the conditions under which she was located. They issued a statement today saying she had been located.

TRAFFIC CHARGES: Shippensburg police have charged Barry C. Knott, Newburg, with a misdemeanor offense of Illegally Operating A Motor Vehicle Not Equipped With Ignition Interlock. The charge stems from a traffic incident at 5:14 a.m. Mat 2 at the intersection of Rowe Road and Volvo Way.

DUI, x2: Kristen Robbins, 30, St. Thomas, was arrested by Chambersburg police last week and charged with driving under the influence of alcohol after she showed up at the police station drunk to pick up her drunk boyfriend.

Her boyfriend had been arrested earlier for DUI and was being released from custody. He needed a ride since, being intoxicated, he couldn’t drive himself home.

When officers realized Robbins was also intoxicated, they investigated and found she had driven to Chambersburg. She parked her vehicle along Central Avenue before walking to the police station. Court records show her BAC was .16%, twice the legal limit for driving.

Police did not release the name of her boyfriend or report his charges.

DUI: Katherine J. Moats, 49, Waynesboro, has been charged with two counts of driving under the influence of alcohol and/or a controlled substance as a result of an auto accident at 8:50 p.m. on West Main Street August 24. She was arrested on August 27.

RETAIL THEFT: Nicholas R. Healey, Waynesboro, was charged with one count of retail theft after it was reported that numerous items were stolen from a business on East Main Street at 3:28 p.m. August 24. He was arrested September 3

DUI: Dakota T.J.L. Ball, Waynesboro, has been charged with two counts of driving under the influence of alcohol and/or a controlled substance and careless driving after an auto accident occurred on August 24 at 1:55 a.m. on East Fifth Street. Arrest Date:  Wednesday, August 28, 2019

THEFT: Adamec V. Stevens, 31, of Altoona, has been charged with one count each of theft by unlawful taking, theft by deception, theft by failure to make required disposition of funds received, receiving stolen property and bad checks after a transaction was made involving a motorcycle on August 28 at 2:04 p.m. on South Potomac Street.

DRUGS: Robert L. Brooks, Jr., 56, Waynesboro, has been charged with one count each of possession with intent to deliver a controlled substance and criminal use of a communication facility after a drug transaction occurred on August 23 at 11:11 a.m. on East Main Street. He was arrested on Aug. 23.

STALKING, HARASSMENT, TT: Brandon K. Gregory, 25, Martinsburg, West Virginia, was charged with one count each of stalking, harassment and terroristic threats after a report was made to police on August 26 at 8:36 a.m. on East Fifth Street. He was arrested on September 3.

Vicky Taylor - May 27, 2020 0
Pennsylvania State Police believe he hired an Uber driver to take him to Hagerstown, Md., after abandoning a stolen Hyundai near a Sheetz on Norland Avenue in Chambersburg.

Dora the Explorer Is Homeless Today