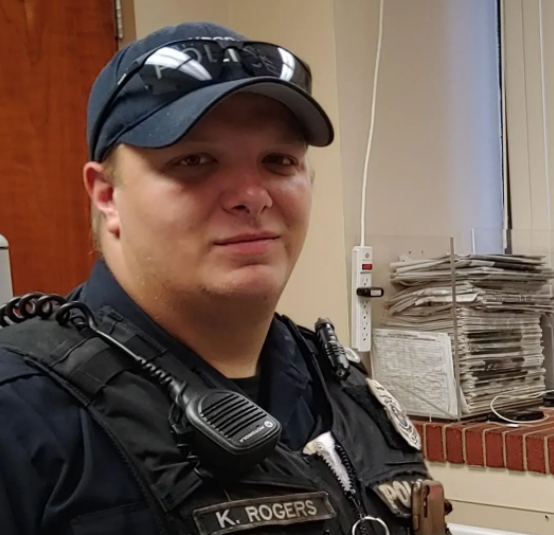 According to court records, on January 25th, 2022, the Franklin County District Attorney’s office was contacted regarding the involvement of then-Police Officer Kellee Rogers with a 19-year-old male. The male was the target of an on-going criminal investigation.

On the 27th, members of the Attorney General’s Office Child Predator Section, assisted in taking the 19-year-old into custody without incident from his residence.

The 19-year-old male met with Rogers in August last year, after his family reported receiving anonymous images over Facebook of the teen’s penis.

He told the officer he had been having sexual relations with a 16-year-old girlfriend. During his interview he acknowledged knowing Officer Rogers and described him as a close friend he could confide in.

He said Rogers asked if he had video of the two having intercourse and if he did, that it would prove as “evidence” of consensual sexual relations. He confirmed that he had video. Roger’s then allegedly instructed him to forward the image of his penis, and the video of the two having intercourse to be put into evidence. He complied and sent Rogers the files.

It felt strange, he told investigators; but he did not want to question Rogers because he was a Law Enforcement Officer. In an February 22nd interview with police the man said he didn’t understand the need for video.

Roger’s admitted on March 8th to receiving a photo and video from the male in August or early September 2021. He stated that he received an image of the male’s penis and a 45 second video of him and his girlfriend having intercourse. He described it in some detail.

Roger’s admitted it was for his own personal possession rather than evidence needed in the investigation. He stated he was sexually attracted to the male and shared those feelings with his husband.

Roger’s denied knowing the female in the video was only 16 at the time and said he wasn’t attracted to any female. Further he denied having any child pornography.

Today the following statement was put out by the Franklin County District Attorney’s Office:

“Waynesboro Chief of Police James Soubier IV has worked tirelessly to ensure that his department and his
personnel are held to the highest standards. In the last year and a half, two Patrolmen from his department have now unfortunately committed criminal offenses, but they have both been held accountable under his watch.

“Waynesboro citizens can thankfully be assured that their Chief is committed to transparency and
will confront internal misconduct without hesitancy. This matter was referred to the Franklin County District Attorney’s Office, in order to avoid any perceived conflict of interest by Waynesboro Police Department.

“After thorough investigation, a Criminal Complaint was filed on May 12, 2022, charging former Patrolman Kellee Rogers with Official Oppression and Sexual Abuse of Children.

“Rogers was preliminarily arraigned at the office of Magisterial District Judge Jody Eyer. A copy of the filed Affidavit of Probable Cause is attached to this release. This investigation was conducted by Chief County Detective Scott Mummert from the Franklin County D.A.’s Office Bureau of Detectives.”

*NOTE: The Defendant is accused of the above offenses, and readers are reminded that all defendants are
presumed innocent unless and until proven guilty.