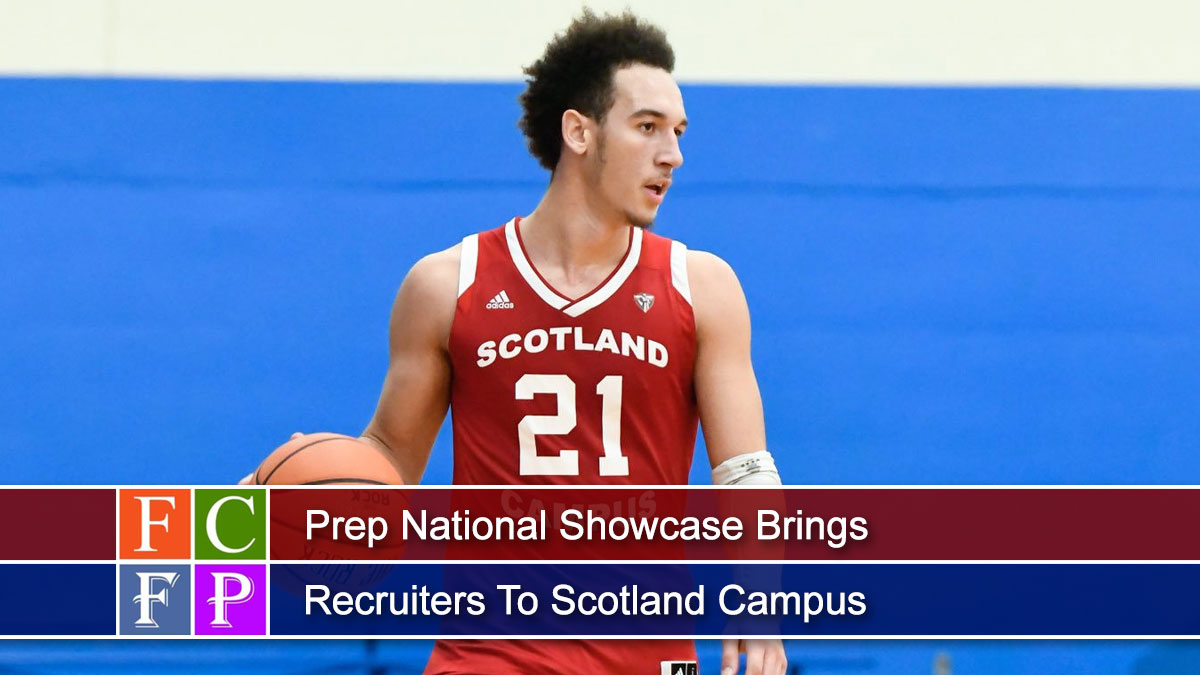 The recent Prep National Showcase drew a flurry of interest from colleges and recruiters across the country to Franklin County’s Scotland Campus.

The kid they call “JZ” has been instrumental in operating offense for the Knights. He’s currently is leading the GAC in assists to turnover ratio while averaging a team-best 6.5 assists. Zackery’s hard-driving style and surges to the rim have been noteworthy. Given Zackery’s shifty and well built 6-foot-3, 205-pound frame, he’s become a chore to stay in front of.

He’s displayed a consistent mid-range game and a crafty overall scoring arsenal. That showed most recently during the Prep National Showcase at Albertus Magnus College in New Haven, Conn.

Since de-committing from Cleveland State following the axing of Dennis Felton last year, 6-foot-9, 225-pound Class of 2020 five-man Abou Ousmane has garnered a steady assortment of interest and scholarship offers from high and mid major programs.

After pulling in recent offers from Fordham and Toledo, programs such as St. John’s, Niagara, and Siena have inquired about the physical and skilled Brooklyn native.

With his back to the rim aptitude and ability to carom boards and provide second chance scoring opportunities, Ousmane is an enticing potential pickup for any program looking to fill a void in the middle. He poses a threat similar to that of former Woodstock Academy stud Tre Mitchell (now a freshman at UMass), given his stature as a throwback big man who can really bully his way to the rim and overpower defenders.

Many coaches have likened Ousmane’s sheer style and make-up to a 1990s NBA Center. He embraces physicality.

He finishes through hard contact. He’s able to maneuver his way around defenders with one-on-one moves. During his 14-point performance in a dizzying and dramatic 91-88 loss against his former team Putnam Science, Ousmane displayed a feathery baby hook and a penchant for around the rim ambidextrously.

He’s opened up a dependable short to mid range jumper. This has become a vital component of his game, as it drags rim protecting centers away from the paint.

Both Niagara and Siena appear to be moving with a sense of urgency at Ousmane, citing the need for an interior Class of 2020 bruiser. Both programs watched him throughout the recent Prep National Showcase.

UMBC is the latest program to develop interest in high-rising 6-foot-6 forward Noble Crawford, the recruit they hosted the Retrievers’.

While the Class of 2020 prospect missed the National Prep Showcase while nursing an injury, the Florida native possesses explosive athleticism and springboard-bouncy style which aligns with today’s game.

Crawford has improved incrementally with his skill set. He was raw and still new to this level of the game as a senior at Orlando national power West Oaks Academy last season.

He leaned on his prodigious vertical leaping ability to turn in dazzling plays under decorated head coach Kenny Gillion. Crawford has worked at putting a skill set behind the talent he arrived at the doorstep with. He’s become more comfortable with his 15-20 foot jumper and is steadily developing a reliable outside shot.

Jayson Woodrich’s stock is heating up after the 3-point ace nailed 13 treys in two games. Beyond proving himself as one of the top unsigned marksmen in the country, Woodrich proved he could rebound consistently and actively play adequate, multi-positional defense.

Siena, Vermont, Kent State, Wofford, Youngstown State, and a host of others reached out about Woodrich, who earned full scholarship offers from Bryant and Fairfield. and most recently Cleveland State. Stony Brook, the latest program to express interest, will be in to see Woodrich this week.

With his deep range and quick release, the issue Woodrich creates for defenders is apparent. He’s also a pure shooter and doesn’t need to be in a rhythm to hit big, momentum-bolstering 3-pointers.

Norrance Berry recently shot a scalding 8-for-11 from 3-point land during the Mount Zion tournament in Maryland. Scotland pounded Shooting 4 Greatness 103-78 in that game and ran roughshod over a hapless Virginia Sports Acad. team in a 112-57 dismantling.

The 6-foot-3 off guard is an appealing prospect because of his length (6-foot-10) wingspan and poised on-ball defensive play.

Jarmon made a verbal commitment to prolong his career at Clarion University (PA) on Saturday. The program’s national prominence and the opportunity to play quality minutes immediately helped propel Jarmon’s decision.

Jarmon, who had 28 points during a recent win over Harcum College (PA), hit a trio of 3-pointers during the Putnam Science (CT) game. He’s been a steady source of energy and competitiveness off the bench. Clarion and California University of Pennsylvania have been in steady pursuit of Jarmon.

He crushed a pair of back to back dunks in 30 seconds that went viral several weeks ago. Walters State (TN) recently inquired about the acrobatic 6-foot-6 forward.