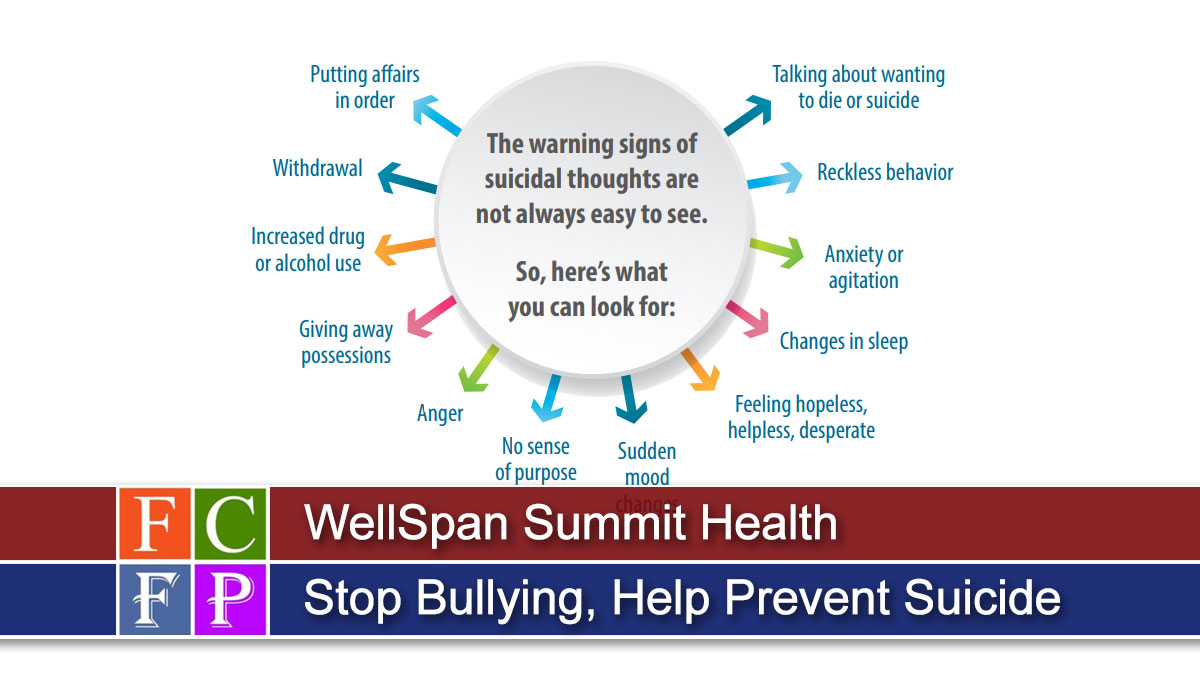 This article is courtesy of WellSpan Summit Health

September is Suicide Awareness Month, and as part of the priority to lead the conversation on suicide prevention, WellSpan Health is encouraging parents to remind their children to spread kindness instead of rumors in an effort to stop bullying and help prevent suicide.

According to the Centers for Disease Control and Prevention, bullying is any unwanted, aggressive behavior, commonly seen among school-aged children, that results in a real or seeming imbalance of power.

“Bullying becomes apparent when one person or group appears to have mental or emotional leverage over another,” said Candace Rutherford, director of outpatient behavioral health services and licensed clinical social worker with WellSpan Behavioral Health. “This doesn’t include isolated events that happen once or twice. Bullying is habitual.”

Bullying can include verbal or physical attacks, threats, exclusion and rumors. Over the years bullying traditionally occurred in person. Today’s use of social media platforms and cell phones means bullying is happening more and more via technology.

The Role of Technology

“In a lot of ways, technology makes it even easier for bullying to occur,” said Rutherford. “People can be empowered and often feel safer from repercussions when they use technology versus being in person.”

How can parents know if their child is being bullied online? Simply asking the question often uncovers a problem. According to the Second Youth Internet Safety Survey, published in the journal Pediatrics, 68 percent of cyberbullying victims spoke up about their harassment to friends, parents, or other authority figures.

One of the primary ways to shut down in-person bullying is surprisingly simple: Stick with friends.

“It’s easy to pick on one person, but it’s a lot tougher for a bully to go head-to-head with a group of people,” said Rutherford. “If friends stick together and support one another, it limits the opportunity for a bully to pursue his or her target.”

There are several ways adults can help stop bullying, according to StopBullying.gov:

Research shows that when elementary students perform several kindness acts a week, there is an increased level of acceptance of their peers. Below are some ways parents can help instill kindness in their children.

According to the Jason Foundation, a national organization dedicated to teen suicide awareness and prevention, four out of five young people who attempt suicide give clear warning signs.

While some of the signs listed below don’t necessarily mean someone is suicidal, they do indicate the person may be suffering. They might need help in order to avoid suicide in the future.