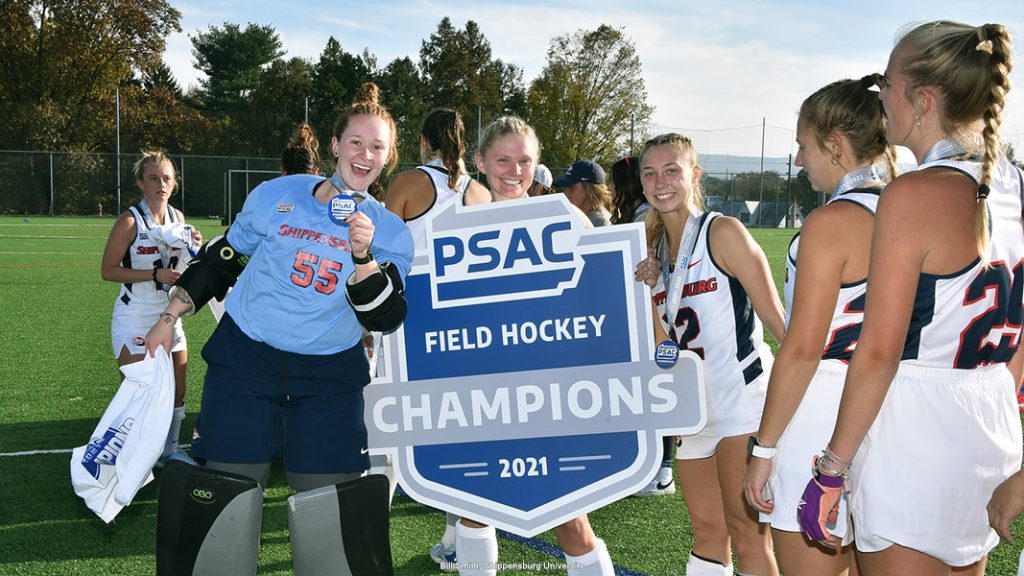 The 2021 PSAC title was claimed by Shippensburg University’s field hockey team Sunday with a 3-1 Raiders win over West Chester.

The No. 1-ranked Raiders won its second Pennsylvania State Athletic Conference (PSAC) Field Hockey Championship in school history; and its first since 2005. It happened on a sunny Sunday afternoon at Robb Sports Complex with a 3-1 victory over No. 2-ranked West Chester.

Shippensburg (18-0) was on the offensive from the start of the game, but West Chester (15-4) struck first. The Golden Rams scored with 10 seconds left in the first quarter on a tipped goal by Olivia Quagliero from Cameron Smith. It gave the Golden Rams the lead heading into the second quarter. It also marked the third time this season that the Raiders trailed in a game.

The Raiders forced a penalty corner in the 21st minute. Freshman defender Merel Hoekstra (Wassenaar, The Netherlands/Rijnlands Lyceum Wassenaar) scored from the top left of the arc to even the game at 1-1. This is Hoekstra’s second goal of the season, both of which have come off penalty corners.

“I usually don’t score so that was something,” Hoesktra said. “If you look back, I think I looked shocked to score the goal. But that excitement, building up, it was great.”

Just over a minute after Hoekstra’s goal, Tournament MVP and PSAC Athlete of the Year, senior midfielder, Jazmin Petrantonio (Saenz Pena, Argentina/Colegio Nuestra Senora de la Misericordia) dribbled through multiple Golden Ram defenders and buried a reverse shot from the top left of the circle to give the Raiders what proved the game-winning goal. It was Petrantonio’s 105th career goal, third-most in NCAA Division II history.

“I’m so happy,” Paul said afterward. “The goal was for my family in Argentina.”

Paul’s goal ultimately capped the scoring, as Shippensburg finished with a 16-9 advantage in shots on goal while West Chester had a 6-5 margin in penalty corners. SU was held to a season-low five penalty corners.

Golden Ram goalkeeper Claire Nielsen had a career-high 12 saves and All-PSAC First Team defender Caitie McNamara had one defensive save.

All-PSAC Second Team goalkeeper, freshman Lindsay Tripodo (Gibbsboro, N.J./Eastern Regional), finished with eight saves – her second-highest total of the season. Tripodo has made 40 saves this season; 20 of which have come against the Golden Rams.

Shippensburg extended its perfect season with its 18th win and is now 3-0 against West Chester this season.

“At the start of the game, this win was going to be for our SHIP family, for all the women that came before us that dreamt of winning a PSAC championship and came so close,” Head Coach Tara Zollinger said. “This championship win was for them. We are so excited to celebrate with so many of our alumni and family here today.”

“The student-athletes are so hardworking and so willing to do whatever it takes to make the adjustments that we needed to make to continue to grow as a group,” Zollinger said. “This is the most exciting thing about this team, that I don’t think we’ve played our best game yet, I think our best game of hockey is yet to come.”

PSAC Defensive Athlete of the Year, graduate Caitlyn Wink (Princess Anne, Md./Delmar), nearly scored her fourth goal this season in Sunday’s win and once again was integral along the team’s defensive back lines.

“I’ve been here for five years and have been going at this (PSAC title trophy) for five years, and it is finally happening; it’s definitely bittersweet,” Wink said. “It took a lot of hard work, everybody being selfless and everybody putting in the hours, putting in the work and never settling for less. We knew coming into the game it wasn’t going to be a cakewalk; so we knew that everybody had to do their role.”

After trailing only once during the regular season, Shippensburg had to come from behind in both of its PSAC Tournament games to claim victory, and the PSAC title.

“We didn’t come out the way we wanted to at first, but coming back to 3-1 was crazy,” All-Conference First Team forward senior Jenna Sluymer (Nieuw-Vennep, The Netherlands/Haarlemmermeer Lyceum, Hoofddorp) said. Sluymer had four shots on goal in Sunday’s game. “I’m so proud of my team and everyone that came to Shippensburg to support.”

Petrantonio totaled two goals and an assist over the course of the PSAC Semifinals and Finals and finished with four shots on goal en route to the Tournament MVP honors.

“Everything we worked for the whole season, the pre-season, the spring, COVID year, it’s all worth it now,” Petrantonio said. “We’re not done yet and that’s a little scary for us and for everybody, we didn’t even play to our full potential. It’s just crazy to think what this team can achieve in the next two weeks.”

Petrantonio added: “We woke up so many mornings during the COVID year, asking ourselves why we are doing this, when is it going to be done, and when will we be able to play. Looking at the big picture, today was the big picture. It was all worth it, every single sprint, every single run test, it’s worth it today.”

Shippensburg and West Chester will now be among the schools who await the announcement of the NCAA Tournament field, which is set for 3 p.m. Monday via a selection show, which can be seen here.

“We are going to prepare for tomorrow as we wait for the NCAA selection show,” Zollinger said. “We will be 0-0 tomorrow when we wake up and prepare to go out for a national championship.”