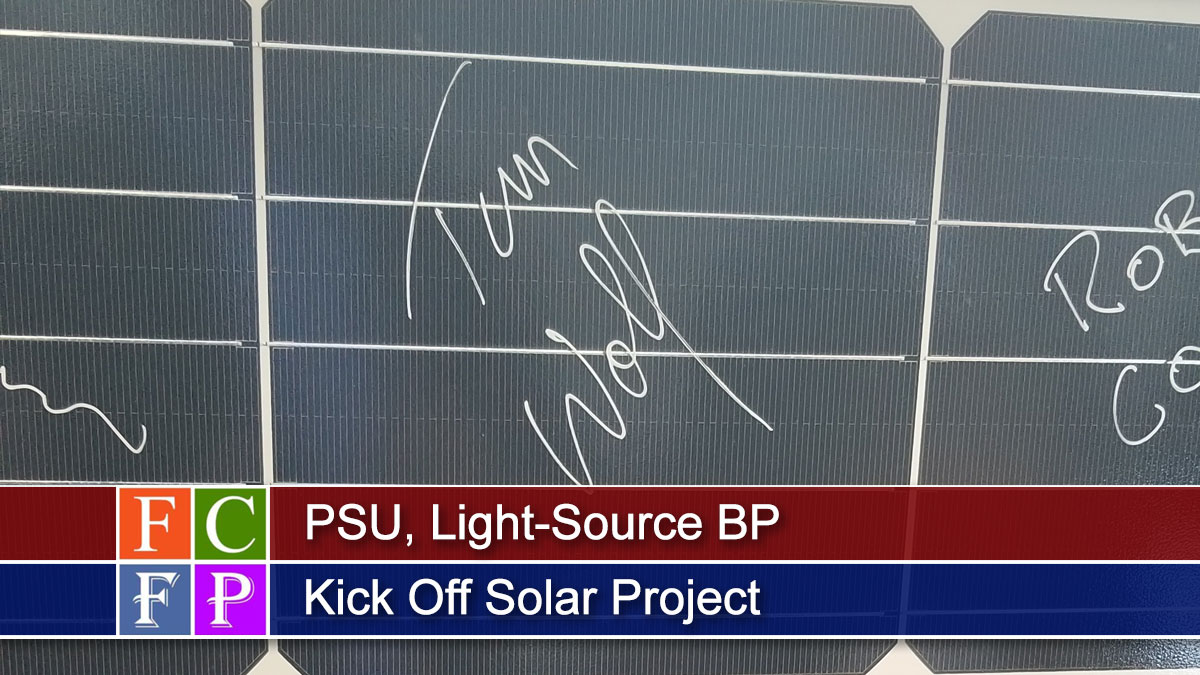 LURGAN TOWNSHIP (Sept. 7, 2019) — Franklin County is about to become home to one of Pennsylvania’s largest solar farm projects.

The 70-megawatt project will provide clean renewable energy for PSU and save the university a minimum of $14 million dollars over the next 25 years.

Along the way, it will expand the use of solar energy throughout the commonwealth, something Wolf praised on Friday.

The “groundbreaking” and symbolic solar panel signing took place on the Glenn and Catherine Dice Farm Friday. There were no shovels in sight, and no earth turned. Just two large solar panels everyone present was invited to sign.

The Logistics of the Solar Project

Lightsource BP will finance, build, own and operate the solar farms, leasing the land on which they sit from local farmers, including the Dices. Penn State will buy all of the electricity generated under a 25-year power contract.

The project will save Penn State at least $14 million dollars over the contract term through solar’s low cost of electricity, while meeting 25 percent of the university’s state-wide electricity needs. It will also help develop the Pennsylvania solar market and employ over 250 people during the construction period.

But the project’s benefits go beyond simple economics, PSU President Eric Barron said. The solar farms will be a living lab for PSU students, where they will gain real-world experience in solar technology.

Barron said just three years ago he was standing on a platform celebrating the last shovel full of coal going into a PSU furnace.

“Today we are using renewable energy,” he said. “This (project) will help us create a sustainable future.”

The project goes beyond just producing cheap, clean electricity for PSU, however. Or educating students in a new technology, or even saving the environment.

It will also be a pollinator friendly project, according to Emilie Wangerman, Vice President, business development with Lightsource BP.

Penn State researchers chose grasses, shrubs and plants for the site to promote biodiversity and pollination. The goal is to improve soil health and create wildlife habitat, according to PSU and Lightsource speakers.

Barron suggested there is a symbolism there too. Pennsylvania is a coal state and a natural gas producer. This project could lead the state in a new energy-producing direction.

“Our goal at Penn State is to be a renewable energy leader in the United States,” he said.

“It can be used to power Pennsylvania’s energy revolution, he said.

Property owner Dice reflected on his years as a farmer and keeper of the land. He said he is happy with the project and believes it to be important to the future.

“This is a new livelihood. It is one of the most important things I have ever done,” he said of his lease agreement with Lightsource BP. “Thanks for making me a very small piece of a very large puzzle.”

Staff Report - April 2, 2020 0
Barry had a great appetite for life and food. As we remember Barry in the days and months ahead, participate in an activity that would honor his memory.

COVID-19 numbers up, locally and statewide