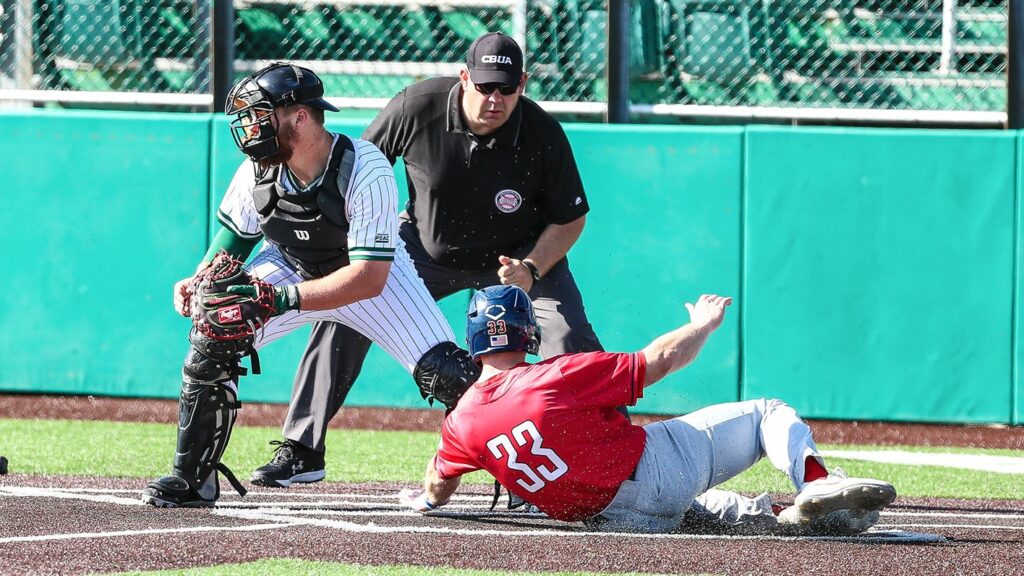 At Jack Critchfield Park this Wednesday, the Shippensburg University baseball team went toe-to-toe with one of the strongest teams in the region to start the 2022 Pennsylvania State Athletic Conference (PSAC) Baseball Championships, facing host Slippery Rock in an elimination game. The Rock scored a run in the bottom of the 10th inning to defeat the Raiders, 4-3.

Shippensburg (26-23) and Slippery Rock (33-14) each got strong starts from their respective pitchers, as Nick Zegna threw nine innings and struck out a career-high 13 batters for the Raiders. Zegna scattered six hits, walked just one, and struck out multiple batters in four of his nine innings, including the side in the sixth.

SU scored a run in each of the first two innings to take an early 2-0 lead. With two outs in the first, senior Ben Werkheiser singled and fellow senior Justin Darden promptly doubled into the right-center field gap to bring him home. In the second, senior Lake Lloyd and graduate Jordan Yoder drew walks and Lloyd eventually scored with two outs on an error on a fielder’s choice.

Slippery Rock, receiving votes in the Division II national coaches poll and ranked No. 21 in the National Collegiate Baseball Writers Association (NCBWA) poll, tied it in the third with back-to-back RBI-singles with two outs by Jon Kozarian and Connor Hamilton, but Zegna escaped further trouble by striking out Eddie Morris to strand the bases loaded and keep the score at 2-2.

SU regained the lead with in the sixth by virtue of another two-out hit. Lloyd sent a full-count pitch down the left-field line for a double to score sophomore Andrew Chronister and give the Raiders a 3-2 lead. The Raiders got the first two runners on in the seventh and chased Rock starter Devin Dunn, but a double play ended the threat.

With one out in the bottom of the seventh, Koby Bubash hit a solo home run to even the score at 3-3. It was the only extra-base hit allowed by Zegna in the game.

Shippensburg loaded the bases with two outs in the ninth, but Slippery Rock ace Ricky Mineo negotiated the hosts out of danger with a two-out popup.

The Rock won in the bottom of the 10th in walk-off fashion against sophomore reliever Jackson LoBianco. The leadoff batter for The Rock reached on an error, and with two outs, that runner came home as Kozarian slid into first safely due to another error, resulting in an unearned run.

Six of the nine Raider starters had at least one hit, with Lloyd going 2-for-3 and drawing a walk to reach base three times.

Zegna’s 13 strikeouts are the most by a Raider in a single game since Zack Sims struck out 14 at Mansfield on April 20, 2018. His 103 strikeouts this season rank fourth in SU single-season history.

With 102.1 innings pitched in 2022, Zegna set a new single-season school record as he is the first Raider to throw 100 or more innings in a season in school history.

The loss marks the end of a run for an impactful group of Raider seniors. Eight men were recognized in the Senior Day ceremony held two weeks ago: JuJu Cason, Darden, Andres Garcia, Lloyd, Matt Shilling, Werkheiser, Yoder and Zegna.