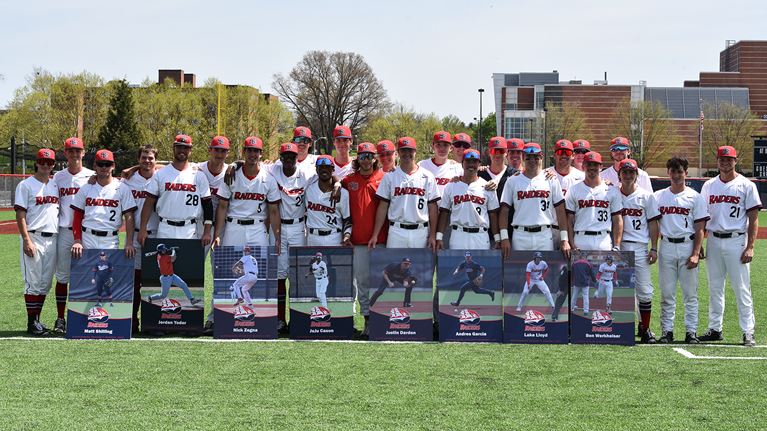 On Saturday at the Fairchild Field, the Shippensburg University baseball team clinched a playoff spot with a series sweep of Mansfield, defeating the Mountaineers by scores of 8-1 and 15-4.

Shippensburg took an early lead in the first inning with a bases-loaded two-run single up the middle by Byler. Mansfield (20-22, 11-10) answered back with a solo home run to right center to reduce the deficit to 2-1.

SU scored five runs in the bottom of the fifth with back-to-back singles from Barbera and Werkheiser and a walk from Darden to load the bases. An RBI-single to left field by Byler scored one run, and a two-run single to right center by Lloyd sent Byler and Darden home. Yoder hits a sacrifice fly to right field to bring Chronister home, while Cason hit an RBI-single to third base to take a 7-1 lead.

The Raiders scored one more run in the bottom of the sixth with an RBI- single by Lloyd through the left side to score Darden who reached base on a single.

Similar to Game 1, Shippensburg took a two-run lead, scoring from a Mountaineer error and a sac fly by Darden. Mansfield answered with three runs in the top of the third including an RBI-double to left field and two-run home run to right field. The Mountaineers added one more run in the next inning from an RBI-double.

Shippensburg tied the game in the bottom of the fourth inning with Chronister bringing a run home when he hit into a fielder’s choice and a sac fly by Lloyd. The Raiders scored four runs in the bottom of the fifth inning, from a sacrifice fly by Werkheiser, a Mountaineer error, an RBI-double by Byler and an RBI-triple by Chronister to take an 8-4 lead.

SU scored four more runs in the bottom of the seventh with a two-run double by Lloyd to left field, an RBI-single by Garcia and a Mountaineer error. The Raiders secured the win in the bottom of the eighth with a two-run triple by Byler to left center and an RBI-single by Lloyd to left center to take a 15-4 lead.

The Raiders will travel to West Chester on Thursday for a nine-inning game at 2 p.m. before concluding their regular season with a doubleheader at Fairchild Field on Friday at 12 p.m.