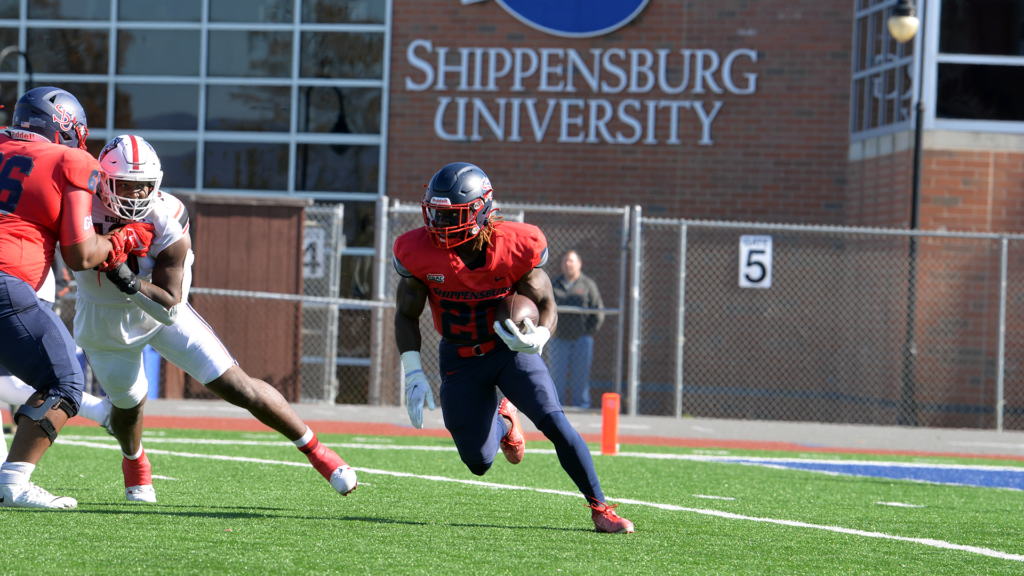 Shippensburg (5-6, 3-4 PSAC East) stunned Gannon with a successful Hail Mary pass at the end of the first half, and senior running back Bill Williams (Camp Hill, Pa./Camp Hill) converted a 22-yard touchdown run in overtime to seal the win.

Gannon (8-3, 6-1 PSAC West), a team that entered the contest ranked No. 7 in the Super Region 1 rankings, may have witnessed their NCAA playoff chances disappear with the loss, despite four touchdown passes from Golden Knights quarterback Kory Curtis.

Shippensburg, with no postseason on the horizon, surprised the Golden Knights early. Freshman quarterback Evan Falco used his legs to convert a 3rd and 15 deep in Shippensburg territory, which sparked an 11-play, 87-yard opening drive that was capped by a 15 yard touchdown reception by sophomore Ian Sheehan.

The Gannon offense started to wake up early in the second quarter, as a pair of big plays set up an 8-yard touchdown catch from wide receiver Damerisse Freeman Jr. to even the score.

The Ship offense later could not capitalize on a short field following an interception from sophomore linebacker Matt Feeney, as the Raiders’ 37-yard field goal attempt sailed wide right.

Afterward, the Golden Knights used a two-minute drill to march down the field and gain the lead, courtesy of a KeJohn Batiste 16-yard touchdown reception with 50 seconds remaining in the opening half.

READ: Football dominates both sides of the ball in rout at Lock Haven

The Golden Knights’ best-laid plans, however, quickly veered off course thanks to the speed and elusiveness of sophomore Redd Douglas. The Ship return man responded with a 55-yard run back on the ensuing kickoff to put the Raiders in Gannon territory.

With just seconds remaining in the first half, Shippensburg took one final shot at the endzone, and the Gannon defense somehow left Douglas wide open downfield for a miraculous 43-yard score with just one second left on the clock. The Falco bomb was the longest TD pass of his young career and tied the score at the break, 14-14.

The SU defense stood tall to start the second half, stopping the Golden Knights on 3rd and short and again on 4th and inches to earn a turnover on downs at midfield. Senior running back Khalid Dorsey then continued the Ship momentum with a solid drive offensively. On Dorsey’s seventh carry of the possession, he slipped past the Gannon defense for a 6-yard Shippensburg touchdown.

The Ship lead did not last, however, as Gannon answered with a 73-yard connection from Curtis to wide receiver Jonathan Bowden to tie the score once with 2:56 left in the third, 21-21.

A lucky bounce provided Shippensburg with a huge momentum swing early in the fourth quarter. A punt from redshirt-freshman Tanner Luther caromed off the leg of an unsuspecting Gannon player downfield and was recovered by Feeney on the Gannon 36-yard line.

The Raider offense took advantage of the opportunity, as Falco found Douglas for a 27-yard gain on 4th and 9 to keep the drive alive and set up an eventual Dorsey 1 yard TD run to capture the lead with 8:22 left, 28-21.

Gannon came through with some late heroics, however, as Curtis delivered a clutch pass to Batiste in the endzone on 3rd and 15 to tie the score. The Golden Knights later had possession with a chance to take the lead, but the Ship defense forced the opposition to punt, thus sending the game into overtime.

The Raiders started with the ball in the extra session and put all the pressure on the hosts thanks to Williams’ TD jaunt, which took place on 1st and 20 following a Shippensburg holding penalty. The Ship defense then held firm, forcing an incompletion on 4th down to hold on for what was a thrilling victory.

Falco’s poise and decision making in the pocket was a major factor in the Raider win. He completed 16-of-32 pass attempts for a career best 221 yards and two touchdowns, and went toe-to-toe with Curtis, who threw for 387 yards to go along with his 4 touchdowns.

Sophomore linebacker Javon M. Cruz led the Raider defense with 10 tackles. Feeney finished with six tackles to go along with his interception and fumble recovery.

Feeney finished what was an outstanding sophomore season with a team-best 99 tackles, including 19 tackles for loss.